2019 ended on a high note… at least for the broader markets.

It was a bright, shining performance for what was a great year for the major indexes.

They posted 20%-plus gains and notched new high-water marks.

But for pot stocks, 2019 was a mixed bag. And for investors, it was a year to forget.

Despite the history made across the industry, the North American Marijuana Index tumbled more than 57% from its highs in March.

It left a sour taste for a sector that offered such high hopes.

But I expect 2020 to be a phoenix year for cannabis – a year when shares rise from their ashes. Especially as new U.S. markets kicked off the new year without dropping the ball…

That was when Illinois officially began adult-use sales.

As we know, Illinois is the 11th state to legalize recreational marijuana. And the market is projected to be worth between $2 billion and $4 billion.

That makes it the largest legal cannabis market in the Midwest, as well as the second-largest U.S. market.

Customers began lining up outside its five Sunnyside* dispensaries at 8 p.m. on New Year’s Eve. And the registers didn’t stop ringing on New Year’s Day.

Cresco made history when it sold the very first adult-use product in the state.

The multistate operator (MSO) ended up serving 3,145 customers and sold 9,258 products for an average ticket price of $135.

Green Thumb had similar success. The MSO reported serving “thousands of customers” at its six locations across the state.

In total, Illinois saw 77,128 transactions worth roughly $3.2 million on the first day of sales. We’ve seen plenty of new markets suffer missteps and struggles at their launch. So it was nice to see the Prairie State break that trend. And it bodes well for the year ahead.

Now, because of the holiday, the Cannabis 2.0 rollout and the short selling in the industry, Canadian producers take center stage this week.

1) Akerna (Nasdaq: KERN), the cannabis technology firm behind MJ Freeway, will hold an investor call tomorrow. The company terminated its CFO the week before Christmas.

2) KushCo Holdings (OTC: KSHB) will report first quarter earnings on Wednesday after the closing bell. Expectations are for revenue to increase 120.9% to $41.45 million with a loss of $0.09 per share. The packaging and vape cartridge company has missed earnings in three of the last four quarters.

As the biggest player in Illinois, all eyes will be on the MSO. Cresco’s next quarterly results won’t include adult-use sales. But expectations are for revenue to surge 164% to $44.77 million. And then in the following quarter, revenue is projected to jump nearly 310% to $86.16 million. That’s when those adult-use sales will really start to kick in.

4) Green Thumb Industries (OTC: GTBIF) shares surged to $9.90 to close 2019. That was their highest level since November. We’ll be watching the Illinois adult-use launch boom to see if it continues.

When Green Thumb reports fourth quarter results, analysts are looking for a 267% increase in revenue to $75.69 million with a loss of $0.03 per share. Though, the MSO has missed earnings expectations the last three quarters.

5) Aphria (NYSE: APHA) will announce second quarter results on January 14. With the launch of Cannabis 2.0 sales in December, all eyes are on any color here as the licensed producer is the first major to report earnings.

Cresco and Green Thumb are the big winners because of the lead-up to the Illinois launch.

And even though Akerna’s shares have fallen 35% in the past month, it’s worth nothing that they’re up almost 30% over the past three months. Few cannabis stocks can make such a claim.

2019 was another historic year for cannabis.

In the U.S., the number of states that legalized adult-use increased to 11.

And the Secure and Fair Enforcement (SAFE) Banking Act and the Marijuana Opportunity Reinvestment and Expungement (MORE) Act became the first major pieces of legislation looking to end prohibition make waves in the House of Representatives.

In Canada, Cannabis 2.0 launched. This is expected to nearly double the size of the market there.

There were plenty of highs. But some major lows as well.

Namely, we endured the longest and most devastating bear market in the industry’s nascent history.

But with share prices still near multiyear lows – and with so much upside on the horizon – I think 2020 is shaping up to be a year to remember for cannabis.

We’ll look for a continued rebound as all these new markets gain steam. 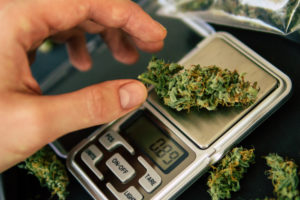 Colorado Cannabis Blazes Higher as the New Year Rolls In