We’ve been missing the sea a lot these days.

In our younger years, we spent hundreds of days rising up and down on the swells far beyond the sight of land.

It’s a beautiful thing, way out there.

Perhaps we love it because the ocean doesn’t show the wear of time.

The waves and the water today look the same as they did a century ago… two centuries ago… and far longer.

For ages, man has cut his wake through the sea.

In that instant, the water splashes and boils behind him. Behind his craft, the stir is a hellish thing.

But eventually the bubbles burst, the swirls lose their spin and things calm down.

Soon enough, the mighty ocean becomes herself again and you’ll never know man was even there.

Some days she’s calm and content as a kitten. Other days – boy, do we know – she’s a monster eager to swallow anybody who gets in her way.

The Wind and the Waves

As we read the many, many notes from readers in the last week, the timeless power of the sea comes to mind.

Across America, waves are crashing.

And, perhaps a tsunami in the making, ignorance.

The winds have broken the water’s surface tension, and the energy of a massive sea has been unleashed.

Readers feel it too. And our response to them is the same…

Turn your bow to the waves, hold the power steady and, soon enough, the wind will be behind you.

The ocean, in her great quest for equilibrium, will fix herself.

As we turn to the mailbag, you’ll see what we mean…
[mw-adbox]

We received a slew of great feedback for Joel’s piece this week. Most of the emails had a similar tune.

You’ll see it in this one…

Couldn’t agree more with today’s Digest, but is there even a remote chance for more than small, pockets of change? Sadly, MONEY/profit will always be the driving force behind the world food supply.

Also, it would take a move back to an agrarian society and that is even more remote of a chance.

Conclusion is that individuals need to take responsibility for themselves and their own. Oh, another remote possibility! – Reader S.V.

S.V. is right. Money will always be the driving force behind the world’s food supply.

And that’s a good thing. It’s our only hope – because money, like the salty sea, has spent eons seeking equilibrium.

As more and more consumers catch on to the ideas Joel has touted for decades, they will back their beliefs with money.

Take our neighbor, for instance.

She stopped by our flower farm the other day. She likes what we’ve done with the place – transforming a tired old corn and soybean field into – pushing humbleness aside – a flat-out piece of art.

For the last nine years, she’s leased her acreage to another farmer.

“But I don’t like what he does,” she told us. “He’s constantly spraying the field, and the soil is looking worse and worse each year.”

We hear that a lot about him. He’s old-school… and not in the good way.

We’ve also heard her next words a lot too.

And that’s the plan. Next season, we’ll add on a dozen more acres… and we’ll treat it right.

But here’s the thing. It’s critical.

If we offered to pay just $100 per acre instead of his $200, she likely wouldn’t sign the lease over to us – nor should she.

Equilibrium was not struck… which takes us to our next question.

“I agree with Joel. How do I support the idea? Where can I buy food grown with his value system?” – Reader B.H.

This is where our take goes against the stream. It gets us in trouble with our friends in the industry.

You know those signs that say “Support your local farmer?”

Or do you know somebody who’s sold you something at a premium just because it’s made locally and you’re supporting the “little guy”?

After all, sorry to say it, but everybody’s local to somewhere.

It’s that sort of “pay more for less” mentality that has kept the local food movement from growing to what it should be.

If you truly want to support it, get educated about it and buy the best products at the best prices.

Know when you’re being “greenwashed.” Know when a product is inferior.

And know that if a farmer can’t compete… he should find a different way to win the race.

Don’t “support” your local farmer. Handouts do no good.

Instead, support the fella with the best product for the money.

That will change the world.

Anything else is no different from the corporate or social welfare that’s corrupting this nation and corroding it to its core.

See what we mean…

What’s Next for America?

How did it happen? Nothing goes bad overnight… drip, drip, drip… and then it overflows… and that seems all at once.

Congress is corrupt… the Supreme Court is worthless and out of touch. The media, the schools, Hollywood… the churches are irrelevant because they haven’t taken a stand to stop anything.

So it is divide and conquer… isolate the people and socially distance them… no hugs, no handshakes… beware of every word so as not to offend anyone.

I joined the Navy 50 years ago… I am still in touch with some of them. We share the values of 50 years ago… back when there were values to share. I can hardly relate to a lot of people these days.

America is not America anymore… there is no moral compass… look at the laws… what we have made legal does not reflect what the majority thinks… the laws reflect what the powerful want done. God help us. – Reader J.B.

J.B. hits on some common themes these days. Everybody wants to know where America will head next and whether there’s any way to alter the course as things begin to overflow.

We’re hopeful. We really are.

It may not show through the anger on both sides, but we’re really all just fighting for the same thing… the ability to live our lives without some other jackass interfering.

To some, that jackass is a cop.

To others, that jackass is Washington.

To us, that jackass is anything that foolishly tries to halt the equilibrium the world so forcefully tries to reach.

If a wave is crashing, we say let it crash. A pile of money or stiff new laws won’t fix the problem. It’ll only divert the wave in another direction.

The waves are crashing… so let them discharge their energy so we can reach equilibrium and get sailing again.

These waves may be too big to stop. The crash may hurt, but it must happen before we can sail on.

One more note for the investing crowd. This one is important.

I’ve been getting your newsletter, Manward Digest, for a couple of weeks now and really enjoy reading all of your exciting new (and potentially profitable) investment picks. It’s a wonderfully informative and insightful newsletter and I look forward to reading it.

The problem for me is, I’m clueless when it comes to how to actually invest money in your stock picks.

I watched your YouTube video on Opening a Brokerage Account, which was very informative. However, I’m still a bit hesitant to open a brokerage account, only because I’m sure there’s a lot that I just don’t know about investing.

How do I actually make a tangible profit from owning the stocks you suggest?

Once I do get to buying stocks, then what do I do?

Do I have to watch them constantly and hopefully guess the best time to sell them in order to profit from them?

Please help. I’m brand new to investing, and I do know there’s risk involved with buying stocks, etc., but I’m just looking for some practical advice regarding how to start out well in investing.

Thank you for reading my question, and I hope to hear from you soon. – Reader A.K.

Ahhh… what a refreshing note. There’s no blame. No call for a handout. No pointing the finger in another direction.

It’s a just a good person looking for good Know-How.

If we had a nation of folks writing letters like this each day, wow, what a nation we’d be.

We could answer these questions a lot of ways in a variety of depths. And we will (more on that in a minute).

For now, here are the simplest – and most effective – answers.

If you’re scared to open a brokerage account out of fear of messing up… answer this. What’s worse: messing up (which is truly hard to do on today’s platforms) or never trying?

When you do, you’ll start on the right foot. You’ll immediately do what 9 out of 10 pros can’t… You’ll keep up with the market. That’s because the ETF gets you a slice of each of the companies in the S&P 500 with just one ticker.

You can buy and hold for years… you can trade it for short-term trends… or you can get fancy and play the options market.

The worst case is you royally screw up and lose your $300.

We doubt it will happen, but if it does, that’s fine.

It will be the most educational – and liberating – $300 you’ll ever spend.

Bottom line… Get in the game and see what works for you.

Of course, we know that’s easy for us to say… We’ve been doing this for 20 years.

That’s why about six weeks from now, we’re going to launch a project unlike anything we’ve ever done before.

We’re going to launch a platform aimed specifically for folks like A.K. and the countless others who have written us asking where to start.

Many more details on that soon.

For now, keep the comments, questions and feedback coming. Email us at mailbag@manwardpress.com.

Here’s to, as we say on the water, calm winds and following seas… 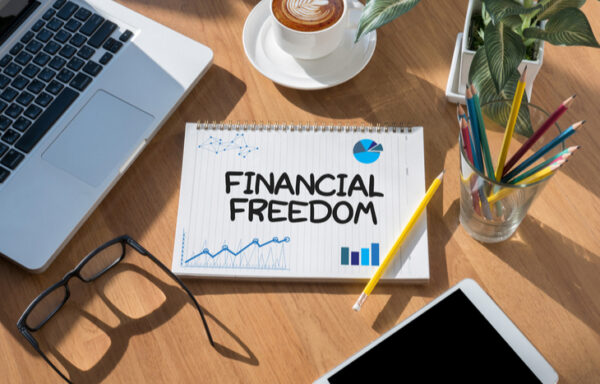