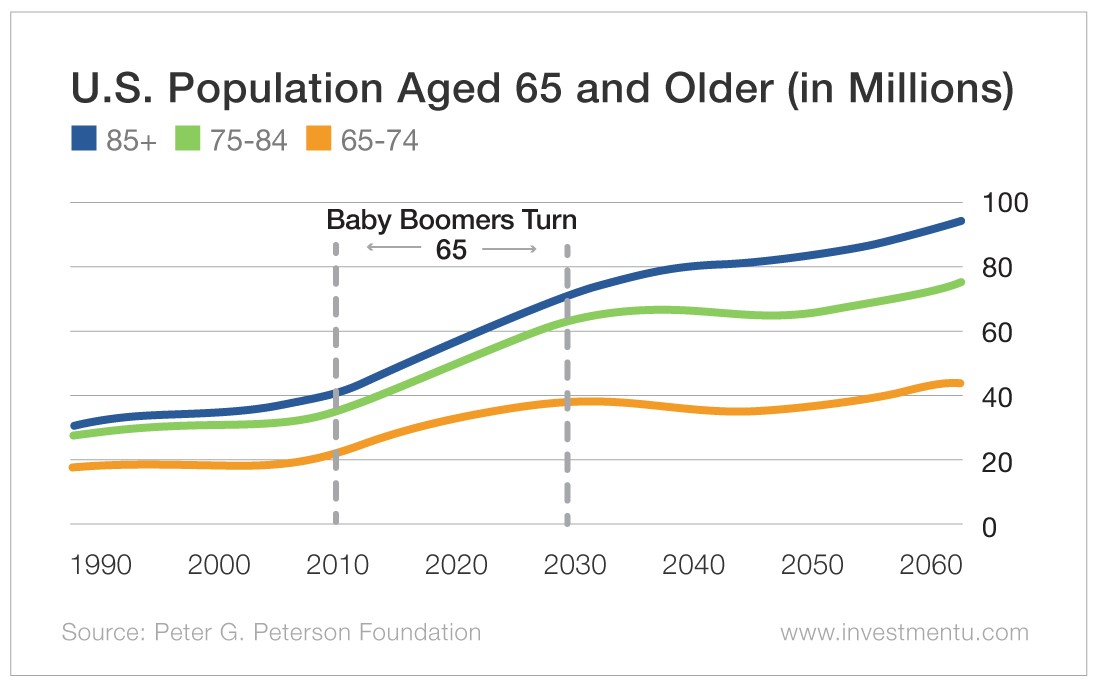 The U.S. is facing a very modern crisis: an aging population and a low birth rate. Unlike other developed countries, however, we’re at the ready.

The chart above shows that by 2060, the number of Americans aged 65 and over will be close to 90 million. Nearly half of those will be over 75.

These numbers are nearly three times what they were in 1990.

Baby boomers are the generation of Americans born between 1946 and 1964. Boomers retire at a rate of around 10,000 per day. They represent nearly 23% of the total U.S. population and are driving the growth in the number of senior citizens.

As a result, America’s next technological boom is looking very “gray.”

As they age, retiring boomers don’t want to sacrifice the things they love, so they’re funding the development of better, longer-lasting and less invasive joint replacements.

Michigan-based Stryker Corp. (NYSE: SYK) is at the forefront of the joint replacement industry. In 2017, they recorded more than $12 billion in sales.

It’s innovated cutting-edge, new surgical technologies and is in a great position to profit from the boomer retirement wave.

But boomers influence on the graying of our economy doesn’t stop with joint replacements.

Many older people will need additional assistance. Since Americans are having fewer children and families are more spread out, family care may not be an option for many boomers.

But that won’t be the case.

In fact, both are shrinking businesses. In-home care is instead the future of elder care. Companies, like the California-based CareLinx, have created a growing $100 billion industry.

These companies connect people to a network of care providers. They allow for all the care of a nursing home in the comfort of one’s actual home.

Beyond home-care companies, there are a number of startups that cater to the needs of America’s aging population.

Liftware, for example, has developed technologies to stabilize eating utensils for people with limited arm movement or a tremor. It was acquired by Google in 2014 and is now part of the company’s Verily Life Sciences research organization.

And Neurotrack has developed a retina analyzing program that detects damage to the hippocampus – an early sign of Alzheimer’s disease.

Making the increasing longevity of the American population a good bet.