What a difference a year makes. 2018 was tough on investors, and it ended with stocks in retreat. The decline was triggered by growing fears of a prolonged U.S.-China trade war fueled by President Trump’s “I am tariff man” tweet on December 4.

In addition, the Federal Reserve was in a multiyear cycle of rate hikes. Nobody knew it at the time, but the last hike occurred on December 18, 2018.

Across nearly every major asset class, 2018 was a bad year.

Fast forward to December 2019. A yearlong rally accelerated in the fourth quarter, with stocks ending the year at or near all-time high levels.

U.S.-China trade tensions remain, but a “phase one” trade deal has been signed. President Trump removed the threat of new tariffs against China. In return, China pledged to purchase at least $40 billion a year in U.S. agricultural products.

In addition, the Fed “pivoted” in 2019 and eased monetary policy three times. The central bank has signaled it’s now on hold for the foreseeable future.

In the end, 2019 was a fantastic year for investors across almost all asset classes.

Like I said, what a difference a year makes! 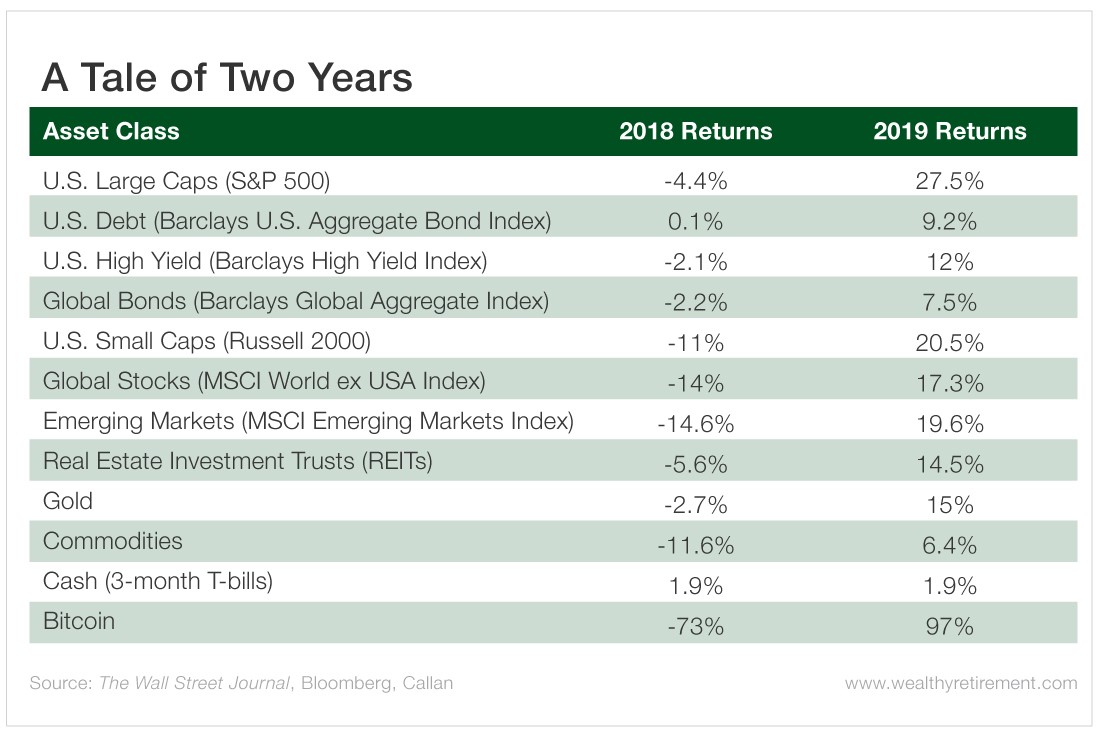 Nobody predicted 2019 would be such a banner year. Most of us suffer from “recency bias” and tend to believe whatever just happened will keep on happening.

In 2020, I expect the “Goldilocks” scenario we’re in to continue. Nobody has a crystal ball. I make no claims to being clairvoyant, but here are my reasons for continued optimism…

Economic growth is solid, but not too hot for the Fed. In anticipation of faster global growth next year, major stock markets around the world are making 52-week highs as 2019 comes to a close.

In addition, Fed Chairman Jay Powell raised the bar on what it will take for the Fed to raise rates.

Inevitable weakening of the dollar. It’s hard to imagine the greenback won’t soften in the coming year. But gold bugs, bitcoin fanatics and others calling for the dollar’s demise are likely to remain disappointed.

My advice is to have some exposure to gold as a hedge, but don’t allocate more than 5% of your assets to the yellow metal or other anti-dollar plays.

Stocks over bonds. Equity valuations are high by historical standards, but not outrageously so. More importantly, stock valuations look cheap compared with bonds, as I wrote in a previous piece.

Notably, U.S. Treasurys remain in high demand because our yields look good relative to the negative yields in Europe and Japan.

Global demand for Treasurys will help keep yields at relatively low levels and bond prices up. (The price of a bond moves in opposition to its yield.)

Americans are pulling money out of stocks rather than rushing into them. A record $135.5 billion was pulled out of U.S. stock mutual funds and exchange-traded funds (ETFs) this year, as I’ve written before.

In addition, margin debt – people borrowing money to buy more stocks – is at its lowest level since June 2005. Historically, bull markets don’t end until “everybody” gets excited and jumps into the pool.

A body in motion. Finally, there’s a lot of chatter along these lines: “Because the past decade was so good for stocks, the coming one will be bad.”

But that’s now how markets work. “What we can learn from history is that bull markets tend to run for much longer than most investors would ever think is possible,” writes Ben Carlson of Ritholtz Wealth Management.

A similar pattern occurred in Japan. The 1970s produced annualized returns of 400%, which were bested in the 1980s when stocks rose an astronomical 1,200%.

“Bull markets… are built on momentum, emotion and the fear of missing out,” Carlson explains. “What if we’re not in the bottom of the ninth [inning] but the top of the fifth?

“What if the past 10 years were unbelievable for U.S. stock market investors but the next 10 years are just as good or better?”

It’s been said the market’s “job” is to do the opposite of what most people expect it to do. If that’s the case, the coming year and decade are going to be highly rewarding for investors. 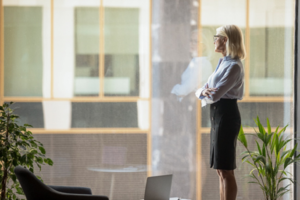