Can Stocks Go Any Higher?

The Dow Jones Industrial Average, which tracks 30 “blue chips” (well-established multinational companies like Coca-Cola and IBM), hit the 28,000 mark for the first time in history.

The Nasdaq Composite Index, which tracks the 3,300 or so companies traded on the electronic Nasdaq stock exchange, set a new record Friday.

And the S&P 500, an index of 500 large companies listed on U.S. stock exchanges, also closed at an all-time high.

The S&P 500 has come to be the most widely used index to represent the broad stock market, and it’s up a whopping 25% year to date.

This has the money media all asking the same question: Can stocks go higher still?

Individual stocks can, for sure, no matter what the overall market is doing. They can move higher on announcements of better-than-expected earnings and revenue. And they can move on other positive news, such as an exciting new streaming service or even a delicious chicken sandwich that’s gone viral.

But investors and economists also watch the broader market indexes listed above for clues to where the overall economy is headed. The S&P 500 is one of the 10 so-called leading economic indicators.

That’s because many investors put their money into stocks if they think companies will thrive in the future and produce strong sales and revenues. So the direction of the stock market – as measured by, say, the S&P 500 – can indicate the collective wisdom of investors about the future health of publicly traded companies and thus the economy.

And as you can see in the chart of the S&P 500 Index below, stocks often begin to fall before the economy technically begins to contract. (Those contractions, or recessions, are represented by the gray bars.) 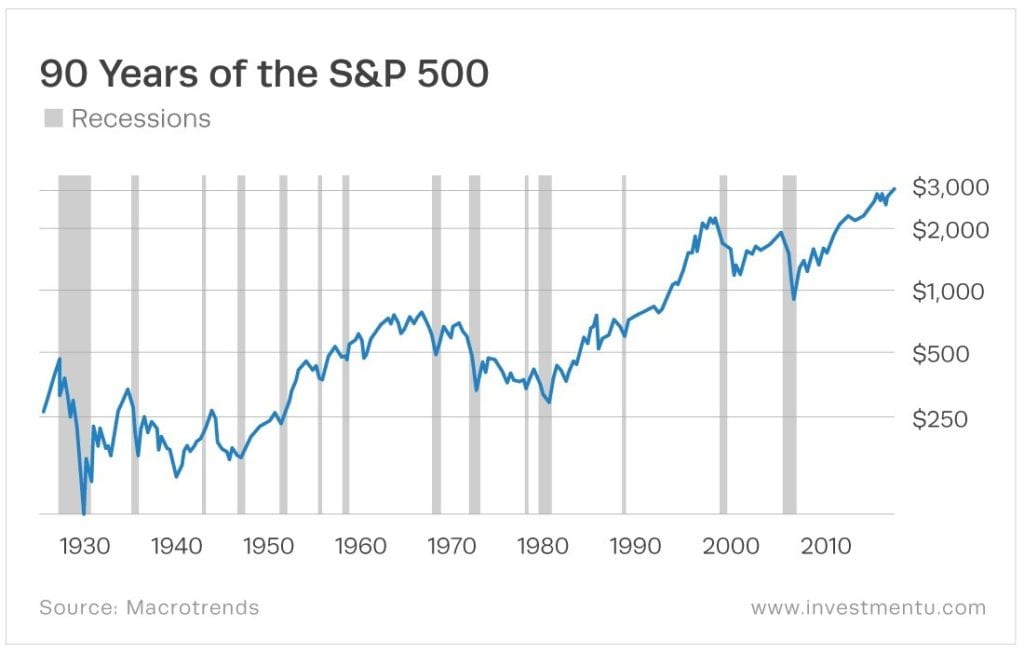 So the market can sometimes predict a recession.

But it’s a bit more complicated than that because a drop in stock prices can also help cause a recession. Many Americans tend to identify the stock market with the economy. So if they see the market begin to head south, they may start to worry about their own financial prospects and tighten the purse strings. And the primary cause of recessions is an overall drop in consumer demand.

Investors and consumers may also sell stocks or rein in their purchases if they’re convinced by the mainstream media that a recession is imminent.

Conversely, if investors continue to believe the economy is strong and that there are great opportunities in the stock market, as Manward Press founder Andy Snyder does, then the entire market can definitely head higher.

“It’s never been a better time to make some money in the stock market,” Andy writes.