Cisco Systems Is Now Trading in the Bargain Bin

Originally posted December 10, 2019 on Trade of the Day

When you’re looking for so-called “value” in year No. 10 of a bull market, it’s not easy to find quality companies trading in Wall Street’s bargain bin.

However, there’s one company I’d like to bring to your attention today that I feel could offer you the best “buy low” opportunity within the entire technology sector.

In today’s Trade of the Day, I’ll tell you the name of the company, why I like it and exactly how members are playing it right now in The War Room.

So let’s get started…

As I’m sure you know, Cisco is a worldwide technology leader known for designing, manufacturing, and selling network hardware and communications technology.

Simply put, Cisco’s technology has been helping the internet work since 1984.

But recently, a rash of news items has knocked the stock lower.

First came the company’s earnings release in mid-November, when Cisco announced that revenues for its quarter ending in January would be 3% to 5% lower. This news pushed the stock 8% lower.

Unfortunately, this wasn’t a one-time occurrence. In reaction to its previous earnings report (which occurred back in August), Cisco dropped 9% because of Chinese trade fears.

Clearly, it hasn’t been a good second half of the year for the company. As a result of Cisco’s year-over-year quarterly earnings growth of negative 17%, Cisco shares are down 6% over the last 52 weeks, grossly underperforming the 18% gain on the S&P 500.

Not only that, but just yesterday, it was announced that two senior vice presidents (SVPs) are leaving Cisco.

SVP of Revenue Frank Palumbo and SVP of Customer Transformation Guillermo Diaz Jr. are both leaving Cisco in February, according to the Silicon Valley Business Journal.

Combine this executive shake-up with an underperforming stock, and it’s easy to understand why Cisco has been under pressure.

When I look at this situation, I see a potential opportunity.

After all, Cisco carries one of the most attractive dividend yields in the technology sector – currently at 3.17%. Shareholders of record at the close of business on January 3, 2020, could receive their first payment.

And from a chart perspective, Cisco is tracking back to the $42.50 level where it began trading at the start of 2019. What could this mean for you? And how should you play it? 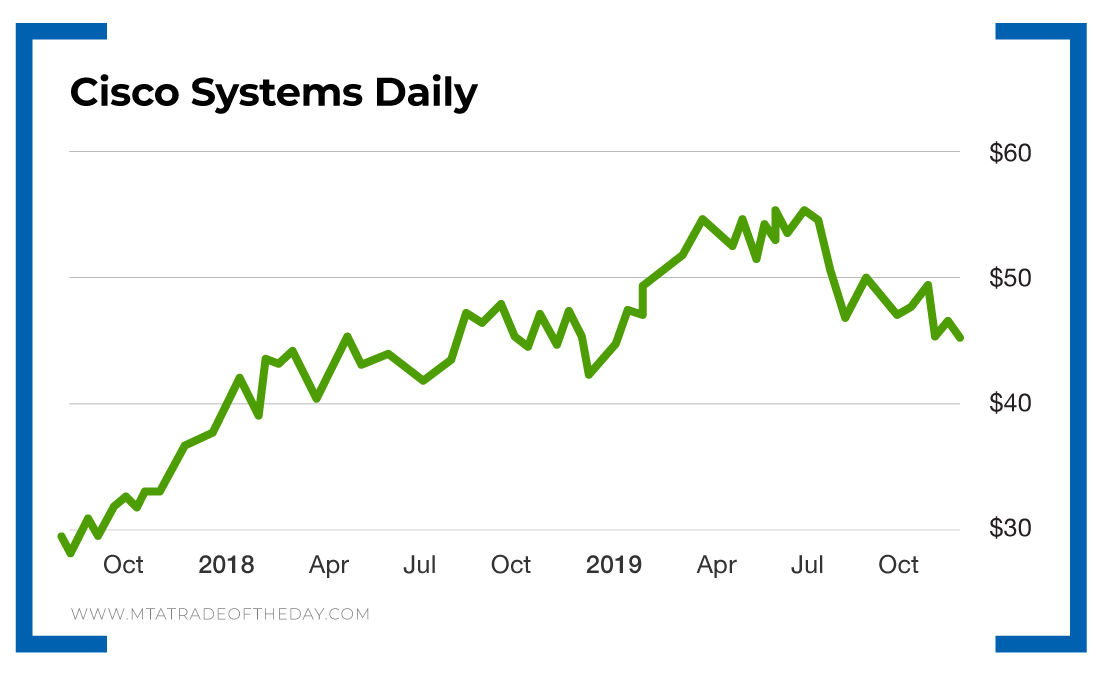 Action Plan: If Cisco trades down to the best support level, around $42.50, it could make for a great entry point on a new stock position. But why wait for that move to happen? In The War Room, my partner Karim Rahemtulla, the Head Fundamental Tactician, is the master at structuring put selling plays that allow you to identify stocks you want to own at lower prices. He’ll even show you how to get paid to wait for lower prices!

Cisco’s current situation is really the best of both worlds for traders. If Cisco goes up, you profit off your put sell. And if Cisco goes down, then you could end up owning a stock that you wanted for a cheaper entry price. Either way, you come out a winner.

Are Biotech Penny Stocks Worth It?