Lululemon Is on Fire This Holiday Season

With the start of trading today, we’ve now entered into a time period that’s been historically very, very bullish.

For instance, from the close of trading tomorrow until the end of next Friday (which includes Black Friday and Cyber Monday), the S&P 500 has been positive in 58 out of the last 69 years – which is an amazing 84% positive rating.

I find this interesting because this historically strong market period is coming at a time when we’ve seen both huge upside moves and equally huge downside moves in some of the top retail names.

For instance – Walmart and Target have been strong – while Home Depot and Macy’s have been weak.

How do you pick and choose which retailers will come out as the winners here in Q4?

Well, that’s the topic of today’s Trade of the Day…

You see, according to Randy Pearce, who is the manager of the Grandeur Peak International Stalwarts Fund, one of the retail winners will be lululemon (Nasdaq: LULU).

But as you’ll see, the reason for his bullishness isn’t what you’d expect…

He says, “Black yoga pants don’t really go in and out of style, but the bigger opportunity that’s really responsible for our interest is the huge play into China.”

From my perspective, lululemon is evolving from just a women’s athletic line into more of an adult lifestyle brand. For example, the popularity of its men’s pants – which can be worn in the office or for both casual and dressy occasions – allows it to do something not many retailers can: appeal to both men and women in the same store.

As a case study, I just bought a new pair of men’s dress pants for $114, and they’re fantastic. I wear them in the office. I wear them out to dinner. And they never need to be dry-cleaned. They’re always wrinkle-free and ready to go.

In fact, I liked my gray pair so much that I went back and bought a second pair in black (without batting an eye about the price).

Combine this male market segment with continued growth in the female segment – as well as lululemon’s growth opportunity in China – and it’s easy to understand why Pearce feels that lululemon has “a tremendous growth engine.” 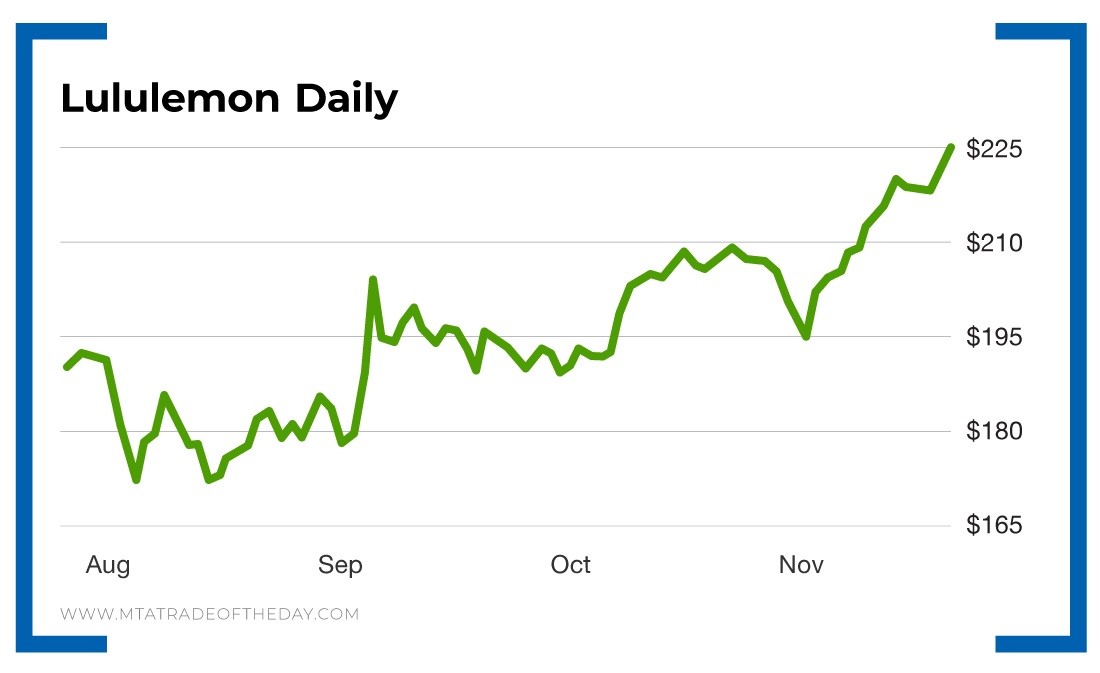 Action Plan: Over the last 52 weeks, lululemon is up 77%, which is trouncing the 16% return of the S&P 500 over the same time frame. Ideally, a pullback to the $205 level would represent the very best opportunity to buy into the company. However, I’m not sure we’ll see this sort of pullback anytime soon.

So in a case like this, you’re perfectly set up for a put sell opportunity. If lululemon continues to rally, you simply collect your premium on selling the put. And if we see a pullback, then you have the opportunity to buy lululemon for a reduced price. Either way, when using the proper trading strategy, a situation like this can set you up for a winning trade.

Full disclosure – lululemon is not one of Karim’s active put sells. However, to my eye, it really lends itself well to the methodology.