Making a 130% Overnight Gain on Kellogg

Many of us woke up this morning to another round of heavy selling pressure – which is being attributed to inverted yields on the two-year Treasury vs. the 10-year Treasury.

What exactly does that mean, and why is it so alarming?

First off, it means that the two-year yield is now higher than the 10-year yield.

Secondly, it’s the first time since 2007 that this has occurred. Whenever this does happen, it’s considered a reliable indicator of an economic recession.

In fact, according to research from Credit Suisse, this yield curve inversion has preceded every recession over the past 50 years – with a typical recession lasting 22 months following such an inversion.

If the forecast is true – and we’re in store for 22 months of recession – does this mean trouble for you and your investments?

Honesty, if you’re a War Room member, it shouldn’t matter.

You see, The War Room is like a social media club for investors with a singular goal: to make winning trades.

Forget LinkedIn with your former co-worker hitting you up for a job referral.

And forget Twitter with its endless feed of nonsense.

Right now, you can join a social media club for investors interested in only one thing: making you money. Spending 15 minutes in The War Room could be the most profitable 15 minutes of your day.

What sets The War Room apart from everything else? I’ll show you.

Let’s go back to a real winner we had with Kellogg (NYSE: K)… 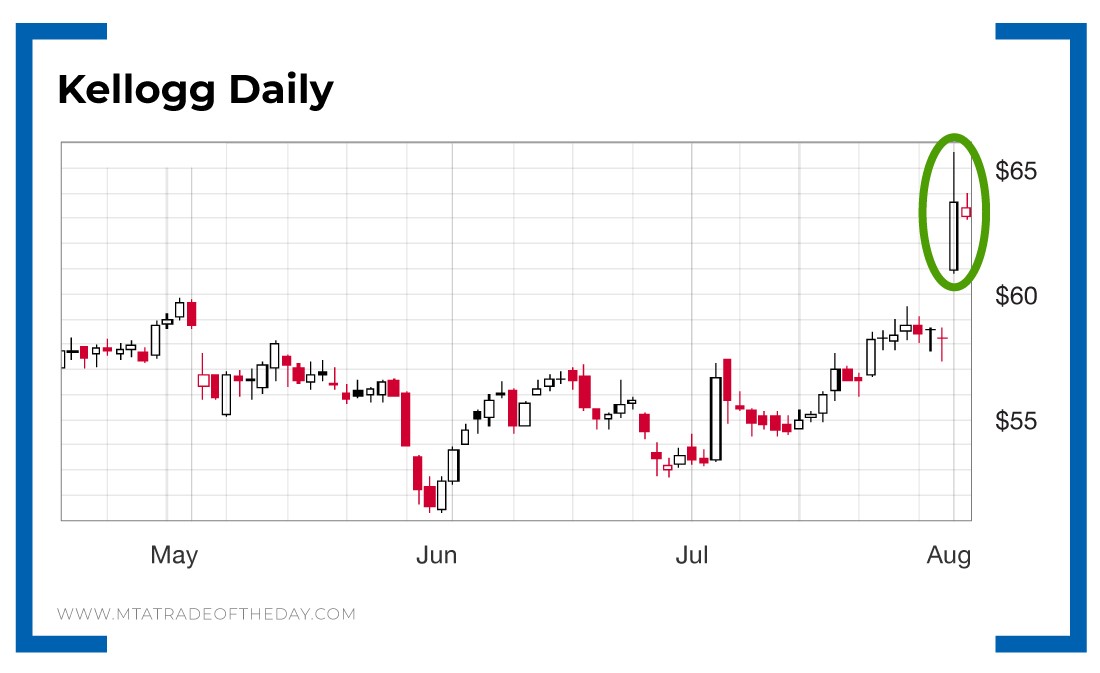 On July 31, we recommended entering a call and put combination for $2.15.

Why was it so cheap?

Quite simply, nobody in their right mind thought that the maker of Pop-Tarts, Eggo Waffles and Pringles could make a big move.

That is… nobody except our members in The War Room!

You see, Kellogg fit perfectly into my selection methodology – so War Room members jumped in.

And the play War Room members could’ve entered for $2.15?

Do you want to start racking up winners like that?