This morning in The War Room, we had a great discussion about the drama that’s now following the holiday commercial put out by Peloton (Nasdaq: PTON).

As you know, Peloton sells $2,000 exercise bikes that come with a membership-based subscription model – and the company recently IPO’d on Wall Street.

Since mid-September, Peloton shares have traded in a range from $20 up to $37.

But then the company’s holiday-inspired commercial came out…

In it, a husband surprises his wife on Christmas morning with a new Peloton bike, which she’s excited to get. She then goes on to document her experience of using the machine.

In emotions that range from nervous to proud – and even unmotivated – the woman in the 30-second commercial offers the viewer a yearlong summary of her experience. And in the end, the husband and wife are on the couch watching the summary with a sense of accomplishment.

However, some of those who viewed the commercial were anything but impressed with Peloton.

Ladies, exercise harder – be thinner for your man and then thank him for it.

The 116-pound woman’s yearlong fitness journey to becoming a 112-pound woman is just ridiculous. Come on.

In fact, the commercial has become a polarizing lightning rod of judgment.

So this morning in The War Room I said…

Here’s my take on the PTON commercial. As you know, they’re getting a ton of heat for a commercial showing a husband buying his wife an exercise bike for Christmas so she can lose weight. Some love it. The majority hate it. But here’ s my take: The point of an ad is to generate buzz. Generate discussion. And most of all – bring awareness for your brand. And guess what? If that’s what a good advertisement is supposed to do – then PTON nailed it. That’s why I like it here.

War Room members responded to this by saying…

I strongly agree! – Carl A.

I love PTON’s commercials and interesting you mention that. I work with the co-founder’s wife, and I always say how amazing their commercials are! – Madeline Z.

But here’s the important part…

Wall Street loves the reoccurring revenue model – which Peloton has. That’s why Wall Street was so excited when Disney introduced Disney Plus to challenge the Netflix monthly membership model. For a monthly fee, Peloton riders can connect their bikes to streamed exercise sessions that come with leaderboards and statistics.

Forecastable revenue is what Wall Street loves to see, which, in my mind, made the pullback associated with Peloton’s negative commercial reaction worth buying into.

If just 1% of the 700,000 people who initially viewed its commercial were to buy a bike, then the company will have truly hit a home run with this advertisement. 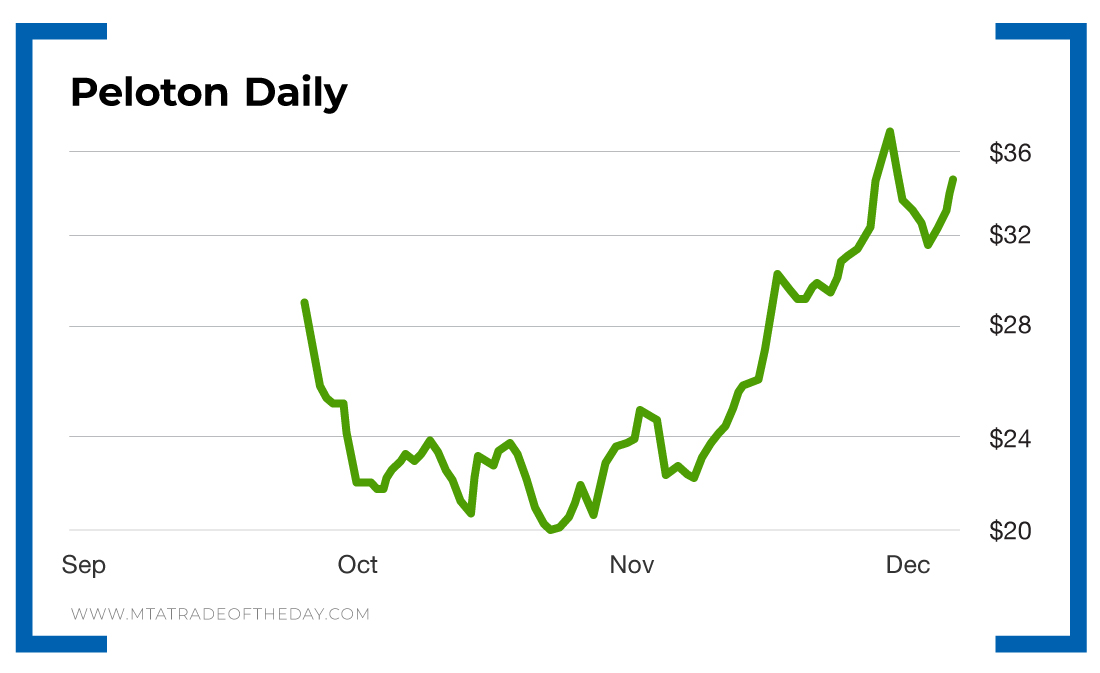 Action Plan: This morning, War Room members entered Peloton calls for $2.11, and then when Peloton bounced higher, members sold them for $2.65.

And going forward, I like the idea of Peloton moving up to challenge its recent high moving into the end of this month.