If that simple yet ominous statement reminds you of HBO’s Game of Thrones series, it should. In the fictional land of Westeros, winter is always coming.

According to the national newspaper of record, recession is too.

Yes, The New York Times has become obsessed with economic recession. And August 17 was a banner day for the paper, with two pieces about the growing likelihood of recession plus a bonus column warning us to prepare for an era of much slower economic growth.

Here are the headlines of that day…

A cursory search of the Times website indicates the paper has published around 15 pieces so far this month about the imminence of a recession. That’s roughly one recession piece per day, so it’s really pounding the table on this.

And just a few days before August began, a headline told us this…

At least that headline writer didn’t attempt to disguise their Thrones outlook on the world.

And of course, you need only read a few paragraphs to learn that the Times isn’t actually predicting a recession soon. It is merely reinforcing an obvious point: All economic expansions eventually come to an end.

Well thanks for the lesson, Gray Lady!

(To be fair, misery prediction does love company. A June 3 Washington Post piece was titled “Happy 10th birthday to the economic expansion. Don’t count on an 11th.”)

Most of these articles pick and choose economic data to fit the recession prediction: some weakness in Asian and European economies, a dip in capital investment by U.S. businesses, a brief inversion of the yield curve. And they often gloss over the strong points of job creation, retail sales, consistent GDP growth, etc.

With so much economic data available, the financial press can create whatever narrative it wants. For the Times and several other papers, the desired story is one of foreboding.

To see how this incessant doomsaying is affecting people, look no further than my dear wife. Her interest in economics is near zero, yet she saw so many stories this past weekend in the Times about impending recession that she suggested we start reining in our spending.

And therein lies the problem with these stories: consumer confidence.

But consumer spending is by far the biggest component in that equation. It represents 70% of the economy.

While consumer spending remains robust – retail sales in July were 3.4% higher than they were a year ago – consumers have expressed in recent surveys some doubts about the prospects of the economy. Consumer sentiment fell to 92.1 this month from 98.4 in July, according to the University of Michigan, which has been surveying consumers for half a century.

Still, those confidence levels remain high, and the recent dip in confidence hasn’t shown up in spending figures. 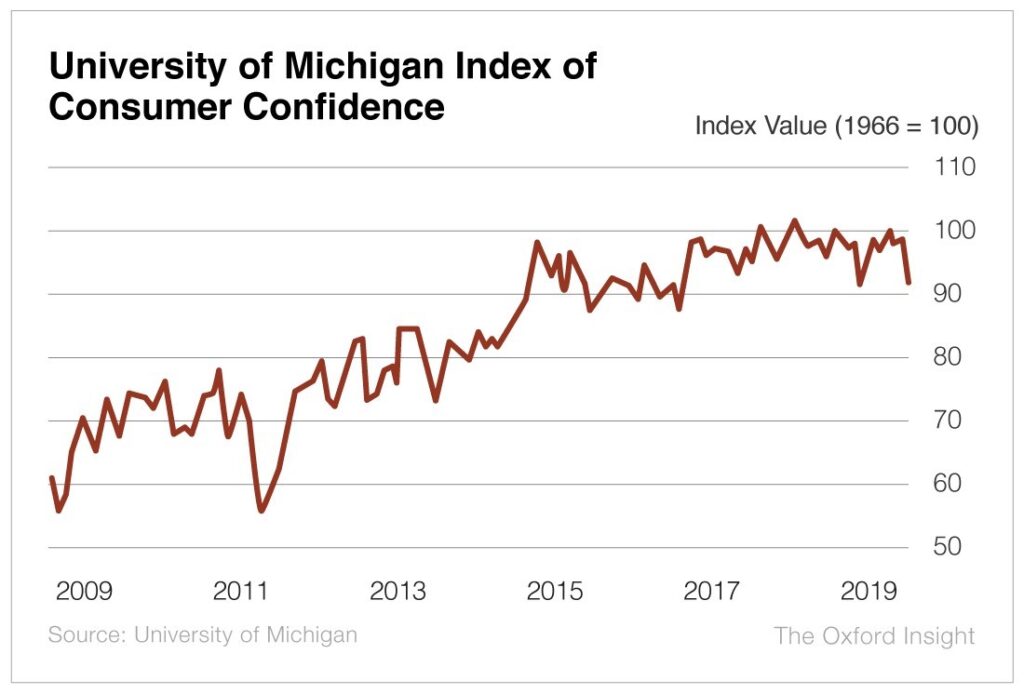 Consumers spend money when they are confident about their future income and financial security.

When doubts about the future creep in, they tighten their belts, spending falls off, corporate revenues and profits drop, economic doubts grow larger, and a vicious cycle takes over.

Certainly President Trump’s seemingly endless trade war with China has not helped the situation. According to the Michigan survey, “Consumers strongly reacted to the proposed September increase in tariffs on Chinese imports, spontaneously cited by 33% of all consumers in early August.”

But the media’s incessant pounding of the drums about a recession right around the corner is, in my opinion, much more damaging.

My wife doesn’t pay much attention to the trade negotiations with China. She doesn’t know what the yield curve is. She has no idea that the University of Michigan measures consumer sentiment. In all of these things she is just like most Americans.

She – and they – do read headlines, however. And those headlines are telling her to slow spending, just in case.