Earlier this month, I mentioned that I lend a hand to a religious foundation that manages $100 million in stocks and bonds for churches.

My role is twofold: I monitor the money manager, and I also help raise money for the foundation.

Many investors think that the church and the market have very different agendas and motivators – but that’s not always the case.

The foundation I volunteer with follows a practice called socially responsible investing (SRI). You may have heard of it, or you may be familiar with its cousin: environmental, social and governance (ESG) investing.

SRI is a very broad term that covers any kind of investing strategy that prioritizes return and social or environmental factors. Often, that means holding companies to high standards of how they treat the Earth, their consumers, their suppliers, their employees and, yes, their shareholders too.

Offshoots of the strategy include impact investing, which aims to create positive change by directly investing in companies that make certain initiatives possible. (A good example would be investing in a company that provides healthcare or education to communities that don’t have regular access to them.)

The foundation I’m involved in takes a broader, more SRI-focused approach. It screens companies before investing to weed out those that cause social or environmental harm.

We’ve recently had a conversation around the topic, though, that sparked a debate. When you consider that the foundation invests in publicly traded companies with market caps often in the hundreds of billions of dollars… is withholding our investment really causing much change, or is it just symbolic?

As we think about this question, we’re considering shifting toward activist investing.

In this technique, large hedge funds (and other folks with pools of money) take stakes in publicly traded companies to effect change on a scale that they hope will cause the organization’s stock or bond price to rise dramatically.

Keep in mind – activist investing doesn’t rule out a company based on social or environmental matters. The activist simply takes a big position to effect change at the company that they believe will result in a dramatic jump in the securities’ prices.

There are two drawbacks for the foundation in considering this approach. First, it’s not really big enough in its own right to create this kind of change on its own. It would need to pool funds with other religious foundations that share a similar mindset.

Second, the foundation would need to place less focus on the ethics that led it to socially responsible investing in the first place – which is a challenging thing for a religious organization to do.

It’s a tricky question – but luckily, there’s a simple solution for individual investors.

If you’re managing a personal portfolio – and not $100 million in various churches’ assets – you’re far from alone when it comes to socially responsible investing.

ESG investments have grown more than 97% in two decades. And 90% of investors aged 20 to 43 plan on moving their money into socially responsible companies in the next five years.

This will benefit their portfolios – not just their consciences. Take the following chart for example. 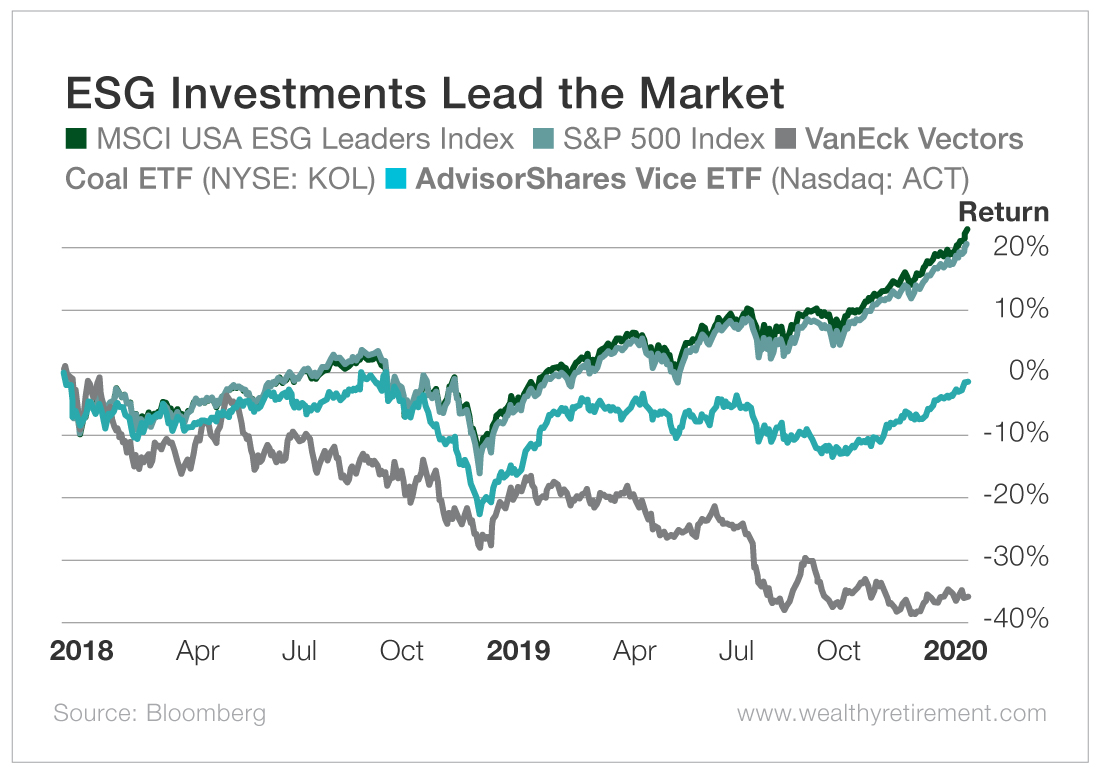 As you can see, the MSCI USA ESG Leaders Index has led the broader S&P 500 Index for the last two years – and has left vice stocks and coal far behind.

According to Bank of America, the volume of funds in ESG assets will increase 65% over the next two decades – so the trend isn’t stopping anytime soon.

There are even a variety of funds now, like the iShares MSCI USA ESG Select ETF (NYSE: SUSA), that offer simple and affordable options for investing in companies that have been carefully screened.

And if you want to specifically not invest in a company (which is called “divestment”) based on its connection to firearms, abortifacients, deforestation, fossil fuels, bribery, you name it, there are a variety of resources that will offer screening for you. And I’d encourage you to do some research.

In that regard, I won’t tell you what to do with your money.

But I will tell you that ESG investing is a proactive approach for any investor to consider.

More of the market than ever before is prioritizing the environmental, social and governance impacts of investing, and when corporations take the hint, the data is clear: Their shareholders reap the rewards.

We’re the same people Monday morning at market open as we were Sunday morning at service. And thanks to this growing trend, now our portfolios don’t have to feel a conflict either.