David Swensen, manager of the Yale endowment and the university’s chief investment officer, is smarting.

Yale recently announced that its endowment returned a paltry 5.7% over the past year. Yale’s results trailed those of its largest rivals, Harvard and Stanford – both of which returned 6.5%.

Yale’s returns were particularly embarrassing… And its lagging returns have raised questions about an investment strategy that’s been sputtering for more than a decade.

Harvard may have a bigger endowment. But make no mistake… Yale has always been the big kahuna among top university endowments.

If imitation is the sincerest form of flattery, the Yale endowment has been flattered like no other. Most of Yale’s academic rivals have spent the last two decades adopting the “Yale model” of investing.

The endowments at Stanford, Princeton, MIT and University of Pennsylvania are each headed by former protégés of Swensen. Each is hoping some of Yale’s magic will rub off on its funds.

Swensen was the first to apply the modern portfolio theory (MPT) taught in finance textbooks to multibillion-dollar university endowments.

MPT teaches that if you diversify across asset classes beyond U.S. stocks and bonds, you can generate higher returns at a lower risk. (This is also the fundamental insight behind The Oxford Communiqué‘s Gone Fishin’ Portfolio.)

Over the past 30 years, Yale shifted the bulk of its investments into “alternative assets.” These assets include natural resources, venture capital, real estate and foreign stocks.

The result? The Yale endowment looks very different from your investment portfolio. 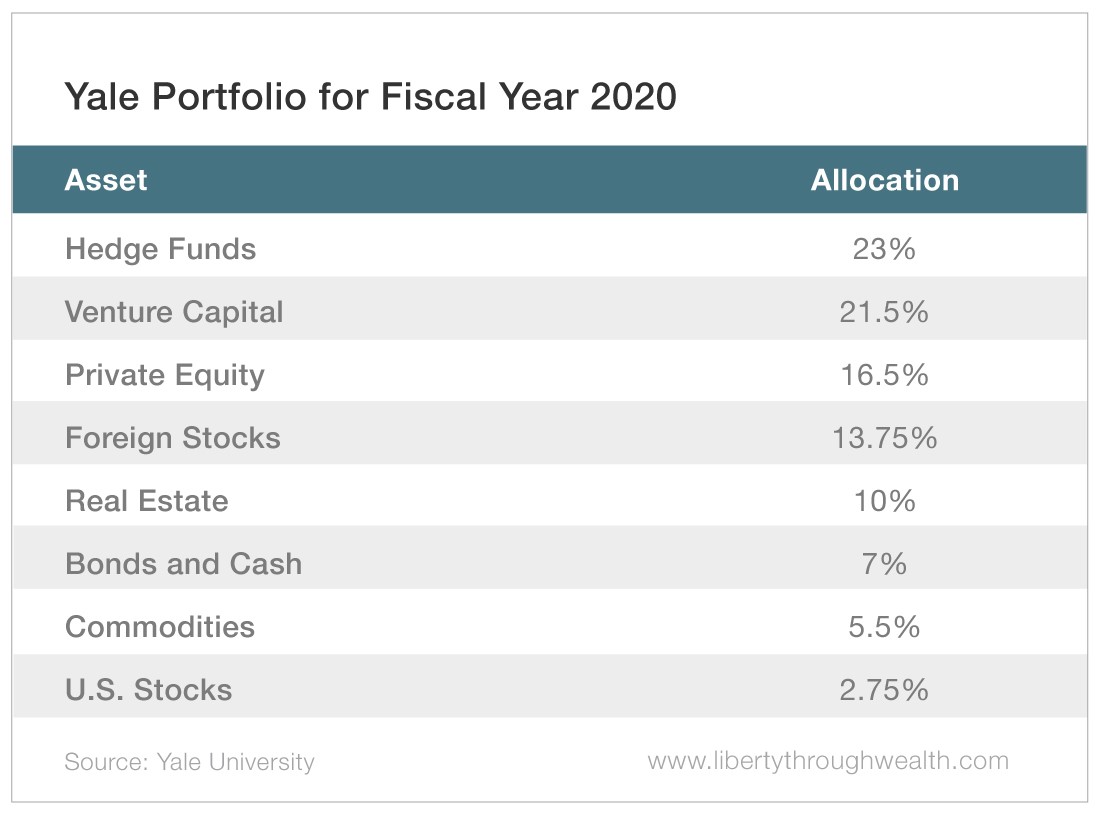 The global financial crisis of 2008 changed all that. Over the past decade, Yale’s returns dropped to just 11.1% per year – substantially trailing the S&P 500’s 14.7% return over the same period.

One big bet stands out in Yale’s portfolio: its tiny allocation to U.S. stocks.

As it turns out, Yale has been underweight U.S. stocks for decades.

Put another way, a whopping 97.25% of Yale’s endowment is invested in assets other than U.S. stocks!

Because the U.S. stock market has been the top-performing major stock market in the world over the past decade, Swensen’s bet against U.S. stocks has cost Yale dearly.

At the same time, Yale’s even bigger bets on private equity and venture capital have paid off handsomely.

U.S. stocks will keep trouncing other asset classes. Until one day, they won’t.

Once the tide turns – as it inevitably will – Yale will again end up on top.