How to Beat Rising Inflation

Inflation is coming – and likely sooner than expected.

He’ll show you how to safeguard your portfolio below…

In July, consumer prices rose a paltry 1% annualized, so inflation isn’t on many people’s radar.

But it should be…

The federal government printed more money in June than it did in the first 203 years of this country’s existence. It has already approved more than $10 trillion in stimulus funds, and more are likely coming.

You know the saying… A trillion here, a trillion there… Soon, it adds up to real money.

(That joke used to be told with billions, not trillions.)

All of that money sloshing around is inflationary. We’re already seeing it in the markets – stocks and real estate are on fire.

I expect we’ll see it in everyday prices as well. Money will join other limited goods and services – particularly as hundreds of thousands of businesses around the U.S. close for good.

The market seems to expect higher inflation judging by the spread on Treasury Inflation-Protected Securities (TIPS).

When the spread between the two rises, as it has done since March, that indicates the market expects inflation to climb. 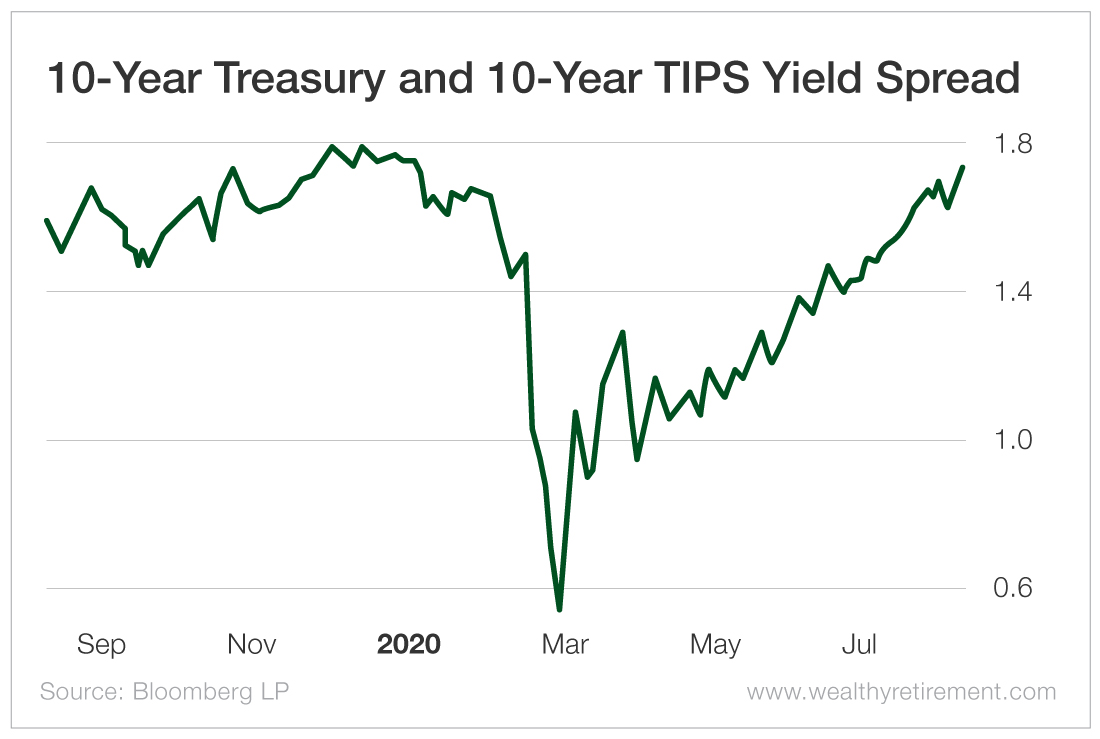 The current TIPS spread is 1.73. That is hardly hyperinflation, but it has been steadily rising and is above the average for the year. I expect this trend to continue.

Perhaps the most important reason inflation will rise is Fed Chair Jerome Powell saying on Thursday that he’s going to let it.

Previously, the Fed’s inflation goal was 2%. That meant the Fed would raise rates if inflation peaked above 2%.

On Thursday, Powell said that even if inflation rises above 2%, he will keep rates near zero.

When was the last time the Fed got its timing right? It typically overshoots its goals, adjusting interest rates too quickly or too slowly.

I have little doubt that inflation will roar higher before the Fed is forced to play catch-up. And it will happen sooner than most people think.

So how do you protect yourself from higher inflation before it eats away at your buying power?

Here are a few ideas…

Not a lot of people are warning about inflation yet. But they will when it’s too late.

Take steps to protect your buying power today so that when prices rise, your portfolio is well-equipped to handle it.