How to Retire Early

It’s a big question: How can I retire early? For some the very idea may sound like a pipe dream. Others still might feel that the risks of early retirement outweigh the benefits. And it’s worth noting that retirement can come with its share of dangers. 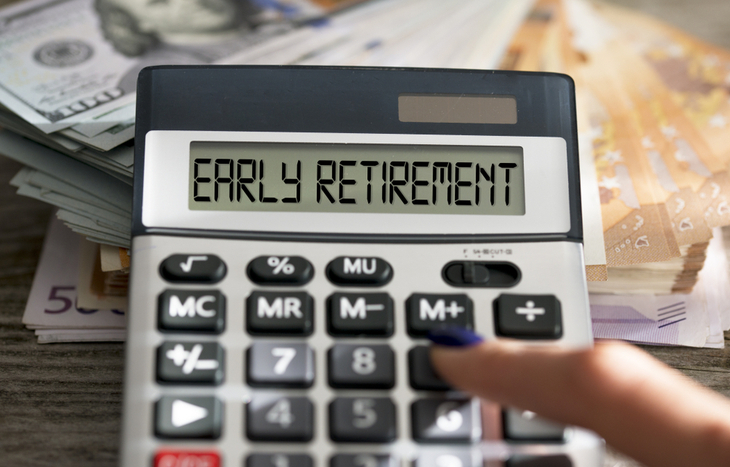 The very idea of retiring can be a scary one. Older adults fear running out of money in retirement more than they fear actually dying. But it’s not just a lack of savings that pose a risk for retirees.

The Harvard School of Public Health shined a direct light on those dangers in its ongoing U.S. Health and Retirement Study. The researchers found that recent retirees were 40% more likely to suffer a heart attack or stroke than those who were still working.

What a kick in the pants… After years of diligently saving, feeding the retirement fund and making all the right choices in order to relax and get out of the daily grind, so many are hit with a debilitating (if not deadly) health condition.

But retirement isn’t all declining health and increased limitations if you know how to go about it.

For starters, the increased risk of health conditions was most pronounced in the first year of retirement. After that, it leveled off. And that right there is a significant reason more folks should aim to retire early.

Now that we can all agree that it’s a good idea to retire early, let’s explore exactly how to go about it…

How to Retire Early: The Formula

You see, anyone looking to retire early needs to analyze these figures. That helps to determine exactly how much money it would take to make work optional. And these three stats need to be combined with how early you plan to retire.

Now, this is a controversial topic. But most agree that a person retiring after 40-plus years in the workforce will need 25 to 30 times their expected annual expenses to last for the rest of their life.

Those checking out of the workforce early will naturally need to boost those numbers a bit… depending on how early they retire and whether they have any sources of passive income.

Let’s start with the basics. The typical household spent $61,224 in 2018, according to the U.S. Bureau of Labor Statics. Below are the major spending categories (the average spending is listed for reference). You can use this as a model when looking at your own finances:

Now let’s pair that with another piece of info. The average income of U.S. households before taxes was $78,635 in 2018. After taxes, that amounts to roughly $57,500 in take-home pay… meaning the average U.S. citizen will accrue 25 to 30 times their expected annual expenses ($1.8 million) right around never.

With more going out the door than coming in, even if the totality of the “other” spending was dedicated to developing passive income streams, retiring anywhere near early is out of the picture. That’s why a plan for how to retire early starts with a little frugality.

Start by looking at places that you can reduce your spending. Some of these numbers are more negotiable than others. If you’re locked into a mortgage, that number might be difficult to amend. But right now could be an excellent time to refinance that mortgage.

That being said, you don’t need to trim all of these numbers right away. Start little by little and see what makes sense for you. At the bare minimum, you want to make sure you’ve got more money coming in than going out.

Next comes the investing side. Far too many Americans leave this part of the equation up to their 401(k). While that’s a great place to start, that money typically can’t be touched without a penalty before you’re 59 1/2 years old. Plus, turning those contributions into enough to retire early is difficult.

This is where other investments can make a huge difference. But a lot of this will depend on something called your time horizon.

Determining When You Want to Retire

The length of time you invest is one of the most important factors to success in the markets.

Let’s use some historical data to unpack what I mean. If a person invests $3,000 a year in the stock market for 40 years and achieves a paltry 6% annual return (which is well under most asset classes), they’ll wind up with a little more than $495,000 in their account. For most, that would be enough to tide them over until tapping into their 401(k). But that’s 40 years of investments. We want it quicker.

Let’s say that same investor had only 20 years to invest before retiring. If they followed the same plan and invested $3,000 a year, they would need a massive 17.6% return to get there… which is highly unlikely.

This is where the power of compound interest comes into play. To see how big your portfolio can grow, check out our free investment calculator.

Let’s go back to our average household with $61,224 in annual expenses. This might seem like a tall task, but if they were able to trim $20,000 off their expenses for just the first year and invest it while achieving a feasible 9.5% return, they could reach $495,000 in just more than 25 years. This includes the annual $3,000 contribution.

Where to Trim Expenses

The easiest places to start cutting back in order to save more to invest are three of the biggest expenses: housing, transportation and food. The simple fact is it’s easiest to save the most where the most is spent.

Let’s start with housing. While refinancing a mortgage can trim a small percentage off this expense, it’s possible to remove that expense altogether. Let’s say you’re a young family. If you rent or buy a three-bedroom apartment, and rent out the additional rooms, it’s possible to completely cover (and maybe even make money from) the rented or mortgaged property.

Simply put, getting rid of housing expenses and putting that money to work in the markets is an amazing way to answer the question of how to retire early.

Then there’s all that money spent on transportation… That fancy car you’ve been eyeing. Do you really need it? Or is it just a symbol for something completely unnecessary? It’s not difficult to find a reliable used car for less than $6,000. And you know what, it gets you to and from the grocery store just as well as that rapidly-depreciating car some sucker just drove off the lot. If you want to retire early, skip the extravagant purchases.

And speaking of groceries, beyond not wasting money on a new car, this is the easiest place to reduce spending. Stop eating out. Folks spend a wild amount of money just for the convenience of having somebody else cook for them. If you want to save enough money to be able to invest and retire early, buy your food in bulk and make it at home.

Where to Add Income

Let’s say you’re “one of those.” The idea of living with roommates doesn’t suit you. You’ve convinced yourself that the overpriced car is somehow worth it. And you can’t say no to Starbucks. Well, if you want to have any hope of padding your investment account with enough to retire on, you’re gonna need to start making more money.

The 9-5 gig will only get most Americas so far… especially if they want to start investing enough money to be able to retire early. This is where the side hustle comes into play. Put that car to work and drive for Lyft or Uber. If you don’t want strangers in your car, deliver food to them through DoorDash or Uber Eats. Drivers can easily make an extra hundred bucks every weekend just delivering during the lunch or dinner rushes. And over the course of a year, that’s a lot of extra money to invest.

But this is just the tip of the iceberg. If earning a little extra scratch sounds up your alley, check out our list of some of the best side hustles.

Retiring Early Starts With You

Only you know what it’s going to take in order to reach your goal and retire early. And only you know what you’re willing and able to sacrifice in order to do so. But the simple truth is that for most, it boils down to conserving money. And the earlier you start and begin to invest that money, the better.

So when it comes to the question of how to retire early, the options are vast. It just takes a little bit of planning, a reasonable budget that is followed to a “T” and an investment strategy that puts your money to work for you. The earlier you start, the sooner you’ll be on the path to early retirement.

Still Not Sure Where to Begin?

Our team of expert investors are here to help. Investment U is home to some of the top traders in the country, with decades of Wall Street experience. And they’re here to explain exactly how to put your money to work.

So be sure to subscribe to the free Investment U e-letter below. By doing so, you’ll be able to make the informed decisions that will put you on the path to early retirement.

Read Next: Retire by 40! Here’s How to Make the Impossible Possible