Transportation as a Service (TaaS) is rapidly growing and is considered by many to be the future of transportation. Through TaaS, car ownership rates will eventually decline. Instead of owning a car, people will be able to buy trips, miles or experiences without having to maintain their own vehicle.

What is TaaS – Transportation as a Service?

Not long ago, owning a car was a mark of adulthood. It was a sign of independence, as well as a way to get to and from work. Over the years, this situation has gradually started to change. Urban areas have grown, which has made public transportation more common. Thanks to carbon dioxide levels, mankind is now searching for ways to reduce our carbon footprint. TaaS is one potential solution.

TaaS is a new mindset. Instead of focusing on car ownership, TaaS involves renting vehicles and similar practices. For instance, Uber and Lyft are both examples of TaaS. Instead of having to own your own car, you can use a ridesharing app to hire a car when you need a ride. 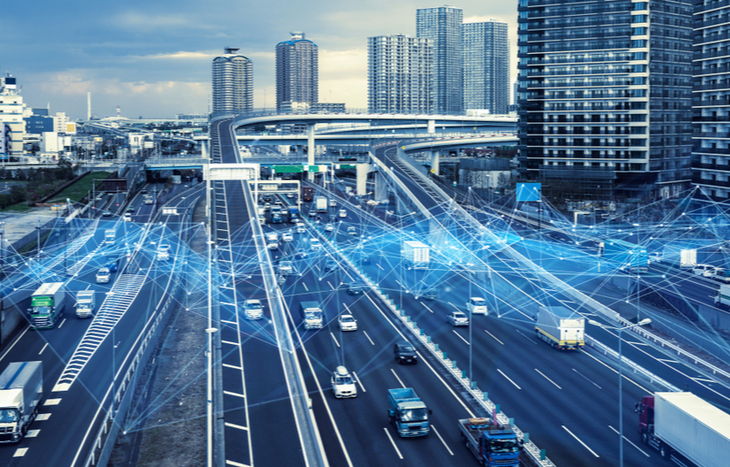 TaaS is also called Mobility as a Service (MaaS). While TaaS may involve an app like Uber and a human driver right now, this will not always be the case. In just one to two years, Goldman Sachs expects the first semi-autonomous car to become commercially available.

TaaS is important because today’s cars spend most of their time parked. Across the globe, the typical vehicle is idle during 95% of the day. Connected cars and rideshares can get rid of this idle time. Instead of multiple people using their cars to commute to work each day, the same people could rent a car and forego car ownership.

What is TaaS Technology?

In many cities, TaaS vehicles will be available 24 hours a day. While the average person only uses their car about 4 percent of the time, a TaaS vehicle will typically be used for 10 times more minutes each day. TaaS will work like public transportation does today, but it will blend private transportation providers into a gateway like an app. Then, people can access the gateway whenever they need to reserve and pay for a ride.

If you drive 15,000 miles per year, you can expect to spend an average of $8,469 a year on your vehicle. You have to pay for car insurance, gas, maintenance costs and car payments. By switching to TaaS, you could save hundreds or thousands of dollars per year.

Other than saving money, many people choose TaaS to get more free time. If you do not have to drive on your commute, you can work on something else. Then, you can enjoy spending time with your family once you return home. During your commute, you can also spend time learning a language, reading a book or enjoying your favorite hobby. In 2018, the average American spent 225 hours commuting. To put this in perspective, it only takes 480 hours to learn Spanish. And It takes around 45 hours to drive from the Atlantic Ocean to the Pacific Ocean.

TaaS has already been adopted by a wide variety of companies. DoorDash, GrubHub, Amazon Prime Delivery and Postmates already deliver products to homes across the country. Through WaiveCar or Turo, you can even lease your personal vehicle or find a vehicle you can lease. Other car rentals like Getaround, Zipcar and aGo will let you rent a vehicle whenever you need it. Meanwhile, Ridesharing, GoNanny, Uber, Zimride and Lyft offer rideshare services.

What Are the Consequences of Transportation as a Service?

The first car dealership in the United States was established in 1898. Since that time period, dealerships have followed a fairly basic business model. To prevent automobile manufacturers from competing with dealerships, many states required dealerships to serve as the middleman. Through TaaS and self-driving cars, this entire business model may change. Eventually, manufacturers may even sell vehicles directly to consumers.

If consumers purchase a vehicle at all, it will only be for a short period of time. While there are many ways that TaaS could be implemented, one option is for a self-driving car developer like Tesla or Google to own an entire fleet of self-driving cars. Then, the customer can pay per mile or minute. Because self-driving cars do not require a human driver, the cost of renting a vehicle will drop significantly.

Is TaaS a Good Investment?

TaaS is conveniently built around four macro trends. Other than environmental, social and corporate governance (ESG) investing, it incorporates connectivity, the gig economy and electric vehicles. Eventually, the TaaS industry will become an $8 trillion marketplace as it expands into areas like drone delivery, freight, distribution, food delivery and personal transport.

These trends are already taking place. As more people turn to TaaS options, car sales have fallen. Global vehicle sales dropped by 22% in 2020. Even without the pandemic, auto sales fell by 4% in 2019. This decline was the first time in a decade that vehicle sales dropped.

TaaS Could Be 10x Cheaper

According to some estimates, TaaS will be 10 times cheaper than traditional car ownership. Unlike traditional car ownership, you will not have to change the oil or look for a parking spot. Already, the market is responding to these changes. In 2009, Uber initially opened up. Within just seven years, Uber was already booking more rides than the entire American taxi industry.

Ultimately, the biggest takeaway is that investors and cities need to prepare now. As the transportation industry adapts and changes, everyone else will have to adjust as well. From fewer parking garages to reduced vehicle sales, TaaS is going to have a major impact on specific industries. While the overall impact of TaaS is going to be positive, there will be significant growing pains along the way.

The following ideas come from Trends Expert Matthew Carr who has been closely following (TaaS) technology as a service and its broader impact.

Over the past couple of decades, we’ve witnessed disrupters completely reshape industries. Facebook (Nasdaq: FB) and Twitter (NYSE: TWTR) launched new ways for humans to communicate and interact. Social media is now one of the most powerful advertising platforms in the world.

The streaming service Netflix (Nasdaq: NFLX) not only created a model that dozens of other companies now emulate but also produces some of the best content out there. The studio receives scores of Oscar, Golden Globe and Emmy nominations and awards each year.

In real estate, there’s Opendoor Technologies (Nasdaq: OPEN) and Zillow Group (Nasdaq: Z). And in finance, there’s Bitcoin and the defi movement. Not to mention the potential for blockchain. The list goes on and on. Many early investors in each of these disrupters have been rewarded with life-changing returns.

What are the TaaS Stocks?

Now, in TaaS, Uber (NYSE: UBER) and Lyft (Nasdaq: LYFT) have flipped the ride-hailing industry on its head. In fact, long-coveted taxi medallions in New York and other cities have plummeted in value. And these two stand to benefit in the continued expansion of TaaS over the next couple decades.

And in the American ride sharing market, Uber is the more dominant force. It currently controls 68% of the market, while Lyft holds the rest. 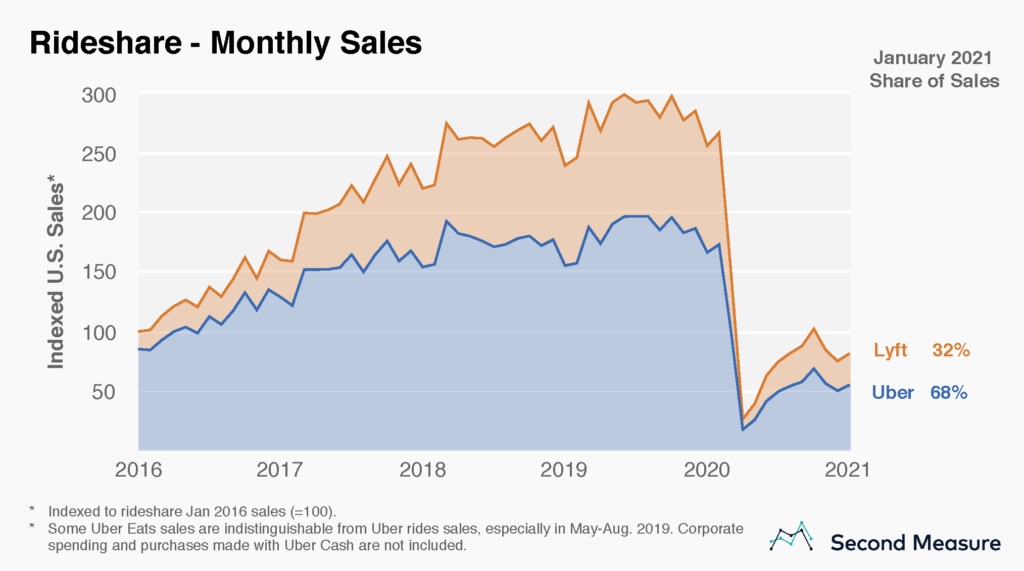 But what’s amazing is, that very few consumers use both. This is an interesting data point. You see, many Americans rely on subscriptions to Netflix, Hulu, Disney+ and Amazon Prime Video. Though, when it comes to ride-sharing, only 10% of consumers use both Uber and Lyft.

But there’s a new disrupter about to go public. Joby Aviation (NYSE: JOBY) is hoping to bring some of this sci-fi magic to millions of commuters. Over the past 10 years, the company has developed a zero-emission, all-electric, vertical takeoff and landing (eVTOL) aircraft designed to leapfrog traffic congestion.

Each aircraft will carry one pilot and four passengers for journeys of anywhere from 5 to 150 miles at a top speed of 200 mph. These are the taxis of the future. The next evolution in ride-hailing after Uber and Lyft. In fact, Uber was working on this idea but sold its segment to Joby in December. And it agreed to make a $75 million investment in the company.

Joby’s eVTOL taxi concept received a $394 million investment from Toyota (NYSE: TM) as well. The company’s goal is to save 1 billion people an hour of commute time each day and to accomplish this in an environmentally friendly way.

Joby plans to have commercial passenger aircraft in operation as early as 2024. And once these are up and running, its business should, literally, take off. 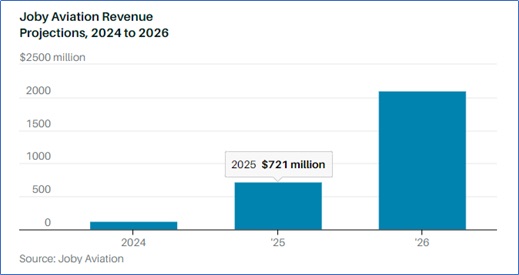 The company forecasts it will make $721 million in revenue by 2025. And it projects that number will more than double by 2026. By then, the company believes each aircraft will generate $2.2 million in annual revenue with roughly 850 plans in service.

Over the next decade, Joby plans to have a total of roughly 14,000 vehicles generating $20 billion in revenue. It expects to have a presence in at least 20 cities worldwide, with recurring revenue from its aircraft segment accounting for more than 50% of annual sales.

These are lofty forecasts. But Joby is further ahead than its competitors are. Joby went public through a merger with the special purpose acquisition company (SPAC) Reinvent Technology Partners (NYSE: RTP).

This deal valued the company at $6.6 billion. That seems steep considering there is no real revenue yet. But the opportunity for the air mobility market is upward of $500 billion in the U.S. Globally, this opportunity is forecast to top $1 trillion.

TaaS is not only the future of transportation, it’s one of the most dominant forces in the market right now. But over the next couple of years, it’s going to evolve rapidly and you could get in on the ground floor.

Stay tuned for the latest investing news on TaaS and other emerging technologies.