What Is Accrued Revenue?

There are many industries where companies provide goods or services but aren’t immediately paid for them. From an accrual basis accounting standpoint, these represent accrued revenue for the company. Technically, they’re assets until they’re realized as revenue and recorded as such on the balance sheet. This revenue accrues for as long as the company provides goods or services, up to the point it issue an invoice and gets paid for them.

Recognizing future revenue as the company delivers goods and services helps to better balance its books and paint a more transparent picture of its financial health. Here’s a look at what accrued revenue is, what it represents and how it factors into the company’s cash flow, reporting and general financial health. 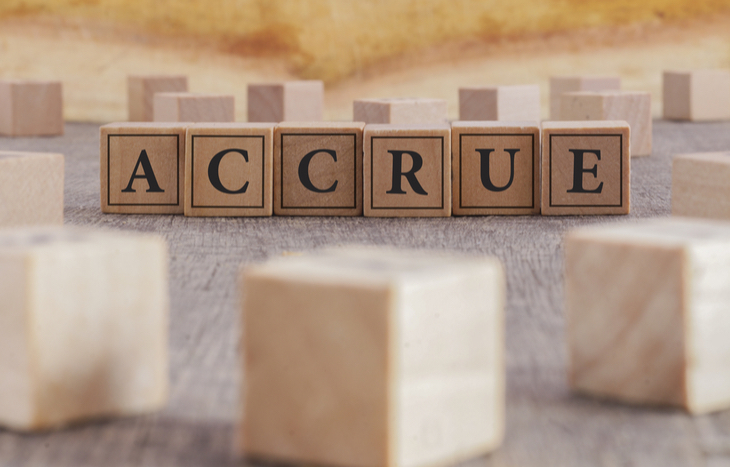 Accrued revenue is the result of a fundamental accounting standard known as the revenue recognition principle. This principle states, “Revenue is recognized when it’s earned, not when it’s received.” That means a company records the accrued revenue in the amount it’s owed during each accounting period for the term of the accrual. No money changes hands – instead, the sum becomes accrued revenue for the company and accrued debt for the customer.

An Example of Accrued Revenue

Accrued revenue is most common in industries with long-term commitments, such as a construction project. These projects can stretch on for months at a time, with work performed over multiple accounting periods.

When the customer pays, the accounts payable balance shifts to cash. This effectively realizes the accrued revenue as revenue, turning the asset into income. Keep in mind that, because the company already accrued the revenue over several accounting periods, the balance sheet won’t spike with the realized income. It’s accounted for along the way, characterized in different ways.

Accrued Revenue Is an Asset

Accrued revenue always shows up on the balance sheet as an asset. This is because it represents an obligation by the customer to pay the company. The company has already delivered a good or service, and the customer owes it for that. The expectation is that, sometime in the future, the company will realize the full amount it’s entitled to when the customer pays their invoice.

It’s also important to note that accrued revenue as an asset can stay fixed or change from period to period. In contact situations, accrued revenue might be the same for the term of the contract – the total sum divided by the term. In projects with billable man-hours or variable costs, accrued monthly costs may differ. Companies need to take special care in tracking accrued revenue accurately in the correct period.

Is There Accrued Revenue in Cash Basis Accounting?

Due to the fundamental principles of cash basis accounting, there’s no such thing as accrued revenue. This is because transactions are recorded at the point cash changes hands, not at the point of origination. On a cash basis, a company would record revenue only at the end of a term and only after receiving it from the customer.

Say, for example, ABC Company builds a shopping center over the course of 18 months. Cash basis dictates that for those 18 months, there is no recognized revenue. However, after the company invoices and the developer pays, the company would net the full amount of the revenue. This is impractical for many reasons – namely, because the company would show revenue only in the month when it completed the project and show losses every other month that it worked on the project.

While accrued revenue represents future revenue owed to a company, deferred revenue is the opposite. This is revenue the company must wait to realize, prepaid by the customer. Because the company hasn’t provided the goods or services yet, it can’t recognize the revenue. Instead, the company defers it until the period when it renders the good or service.

Service contracts offer a great example of deferred revenue. An SaaS company may require a one-year subscription upfront. The company would then defer that revenue in equal increments over the next 12 months as it provides service for the customer. There’s cash on hand, but it’s spread evenly to best represent the nature of the company’s cash flow.

Accrued revenue is simply part of doing business for many companies. Long projects or contracts mean they won’t realize revenue until far into the future. However, due to the accrual basis of accounting, they need to account for revenue in the period it’s generated. That means accrued revenue. Attributing it correctly over the term of the accrual serves to depict the financial stability of the company, as opposed to a “feast or famine” portrayal of revenue.

These financial terms can be hard to comprehend and even more difficult to keep track of. To advance your financial expertise and investment knowledge, sign up for the Investment U e-letter below.

Investors who want to get a more in-depth understanding of a company’s cash flow need to acclimate themselves to accrued revenue and its impact on company financials. Recognizing it as an asset and understanding its implications for future cash-positive results can clue an investor into when the company will experience future profits.