Annaly Capital Management Dividend Safety: A 10th Cut in 10 Years for a 12% Yielder?

In February, I analyzed the dividend safety of Annaly Capital Management (NYSE: NLY), one of the most frequently requested stocks in the Safety Net column.

At the time, I said that until the company proves it can lift net interest income above how much it pays in dividends, it gets a very solid “F” rating. And sure enough, a few months later, it cut its quarterly dividend from $0.25 per share to $0.22.

Back in February, Annaly was expected to generate $1.77 billion in net interest income in 2020. Net interest income is the money a mortgage real estate investment trust makes by borrowing cash short term and lending it out long term.

That would have been enough to cover the projected $1.43 billion in dividends.

Today, the net interest income forecast has been just about cut in half. Now the company is expected to generate only $955 million while paying out $1.28 billion.

That earns a demerit from SafetyNet Pro.

The dividend forecast is lower because Annaly reduced the dividend in the second quarter. 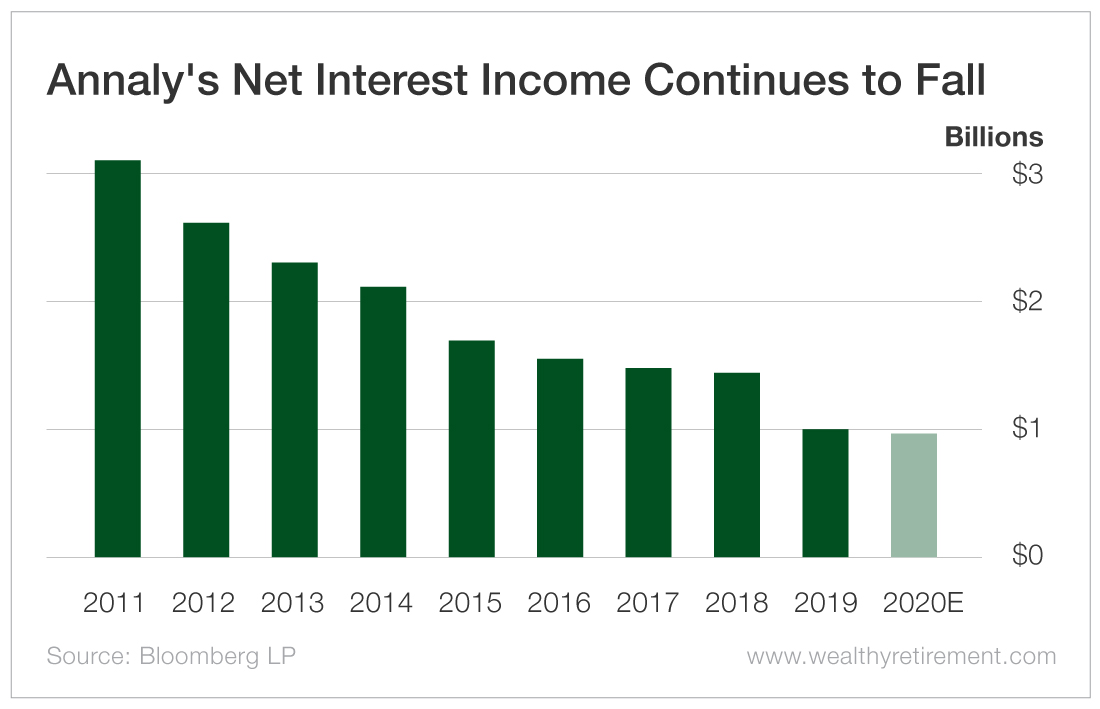 You don’t have to be a trained market analyst to look at this chart and know that things aren’t going in the right direction for the company and its dividend.

Some companies will do whatever it takes to sustain the dividend. Even in tough times, they’ll dip into cash or raise debt – anything to continue paying shareholders the same or even a higher dividend.

Annaly is not one of those companies.

Since 2011, it has cut its dividend nine times. In fact, since then, the dividend has fallen by 66% while its stock has unsurprisingly slid 56%.

A $0.22 per share quarterly dividend may sound enticing, given that it comes out to a 12% annual yield based on the current price.

But the likelihood of that dividend staying at $0.22 is about the same as the likelihood that Donald Trump and Nancy Pelosi become BFFs (best friends forever) and enjoy picnics together every Sunday afternoon.

Look for another dividend cut from Annaly within the next 12 months.

As you can see, Annaly Capital Management’s dividend safety is at a very high risk of being cut. As history shows, this isn’t anything new for one of the largest real estate investment trusts.

To get ahead of upcoming dividend updates, sign up for the Wealthy Retirement e-letter below. It’s the mission of Wealthy Retirement’s team of experts to help you take back control of your “golden years” in retirement.