Costco (Nasdaq: COST) is currently the world’s 3rd largest retailer by revenue (behind Walmart and Amazon) and is well known for offering wholesale prices to its members. To start with a Costco stock forecast, it’s important to understand the business…

For just $60 per year ($120 if you go with the “Executive Member” plan), Costco members can save money on gas, groceries and just about every product in between. Costco also owns the highly-coveted title for “The World’s #1 Seller of Rotisserie Chickens.”

Costco opened its first store in Seattle in 1983 and today has grown to 815 warehouses. From the get-go, its strategy has been to eliminate all the “frills” associated with retailers in order to cut costs. By cutting its operating costs to the bare minimum, it’s able to save money and pass these savings on to its customers. Common retail expenses that you won’t find at a Costco location are salespeople, fancy buildings or delivery options (groceries excluded).

Costco Saves for Customers and Investors

Over the years, Costco has become popular for saving its members tons of money. However, to shop at Costco you need to join its membership program which currently sits at just under 110 million cardholders. This equates to at least $6.6 billion in annual recurring revenue for Costco. However, the loyalty that this membership builds is worth much more than $6 billion.

When you sign up for a Costco membership, Costco automatically becomes your de facto place to purchase goods. Almost without thinking, you’ll pick Costco over Target, Walmart or Amazon because you know that you’ll save money by shopping at Costco. On top of the savings, you also want to make sure that your $60 per year commitment doesn’t go to waste. When it gets a new member, Costco wins twice. It gets $60 in annual recurring revenue and it also gets a large chunk of that person’s daily spending, potentially for the rest of their life.

Programs like Amazon Prime and American Airlines’ AAdvantage program have been successful for similar reasons. After signing up, Amazon Prime members will slowly get in the habit of ordering everything from Amazon. They want to take advantage of free 2-day shipping. Also, some diehard AA members will not even consider booking with another airline because they want to ensure that they’re getting rewarded for flying (through AA miles).

With this in mind, should you include Costco stock in your portfolio, even if you don’t have a membership card at home?

Let’s take a quick look at a Costco stock forecast as well as a few predictions for the stock moving forward. 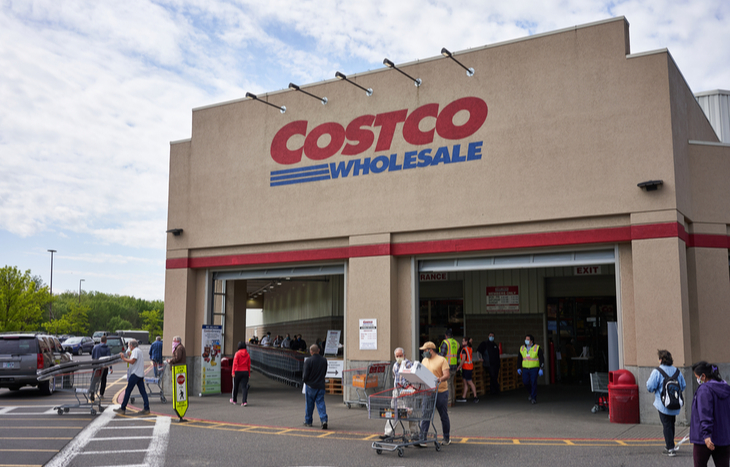 Costco is scheduled to announce earnings on September 23, 2021.

In today’s investing environment, so much relies on the coronavirus pandemic. Did the company have a business model that thrived during the pandemic? Did it capitalize on this position? Will this success continue now that the pandemic is mostly over? In Costco’s case, these answers are yes, yes and yes.

Costco was undeniably a Coronavirus winner (check out these telemedicine stocks as well). People were prepping for the COVID-19 quarantines like it was the apocalypse and Costco’s wholesale-style business is literally designed to help people save money while prepping for the apocalypse. What’s surprising, however, is that Costco is actually getting more traffic now than it was B.C. (Before-COVID).

According to foot traffic data from Placer Labs, Costco’s monthly visits were up 13.8% in July 2021 as well as 12.8% in August 2021 (when compared to 2019 numbers). During its December 2020 earnings report, it reported that revenue from memberships rose 7%. It’s likely that many people opened a new Costco membership in hopes of saving money while it stockpiled quarantine supplies. Now, even though the pandemic is over, this buying habit remains.

Notably, Costco’s success is not an outlier within the industry. Other wholesalers like Sam’s Club and BJ’s have also experienced higher traffic.

Costco has beaten its last four revenue predictions as well as three out of four of its EPS predictions. However, since investors have set a higher bar for Costco, it may be more difficult for it to reach it. It’s very possible that Costco reports an increase in revenue but still falls short of investors’ expectations, which could result in a lower stock price.

In 2020, Costco posted total revenue of $166.7 billion and a net income of $4 billion. This completed five years in a row of growing revenues with an average yearly growth rate of 7.57%. Costco also has a dividend yield of close to 1% and razor-thin profit margins of 2.4%.

Is Costco Stock a Buy?

When making a Costco stock forecast, there are a few things to watch out for.

Mainly, record inflation numbers recently could hurt Costco’s profitability in the short term. Since Costco is known for low prices, it will likely do its best to avoid raising prices even as inflation pushed its costs higher. A similar situation happened with Kroger recently. Higher costs with the same prices would mean less profit for Costco, who already operates on razor-thin margins.

If you’re looking for stocks that can profit on inflation, check out these agriculture stocks. They can pass along increasing costs to customers over time.

On the bright side, Costco was able to use the pandemic to thrive in both the short term and (potentially) the long term. Costco added more memberships during the pandemic, which should result in more loyal shoppers and higher revenues for the years to come. When looking at the long-term Costco stock forecast, the outlook certainly looks rosy. This is especially true since Costco dominates the wholesale retail industry as it faces little competition from Sam’s Club and BJ’s.

The increase in Costco’s membership is also important because Costco is due to raise the price for its membership fee. On average, Costco increases its membership fee by about 10% every 5-6 years. Its last increase was a few years ago, so this fee should be coming in the next 18 months or so. Due to the immense size of this program, even a 10% price increase would boost revenue from memberships by at least $660 million.

Its membership fee is a significant contributor to its gross margin, so this extra revenue could have a big impact on profitability as well as Costco’s stock price. Of course, this is assuming that the membership price increase doesn’t also lead to a drop in total memberships.

As usual, assigning a Costco stock price prediction in the short term is always difficult. This is especially true because there are plenty of other factors that could hurt the market overall. Market-wide moves could hurt Costco stock.

For example, there are rumors that the Federal Reserve will raise interest rates. This increases concerns over inflation, as well as a stock market that has run 90% since its March 2020 low. These are all things to keep in mind when determining whether or not to buy Costco stock in the short term. With that said, Costco stock is certainly positioned well for continued success in the years to come.

I hope that you’ve found this Costco stock forecast to be valuable in helping you determine a Costco stock prediction! As usual, all investment decisions should be based on your own due diligence and risk tolerance.

If you’re looking for even better investing opportunities, sign up for Wealthy Retirement. It’s a free e-letter that’s packed with tips and tricks. You’ll hear directly from bestselling author Marc Lichtenfeld. He’s an income expert who literally wrote the book on getting rich with dividends.