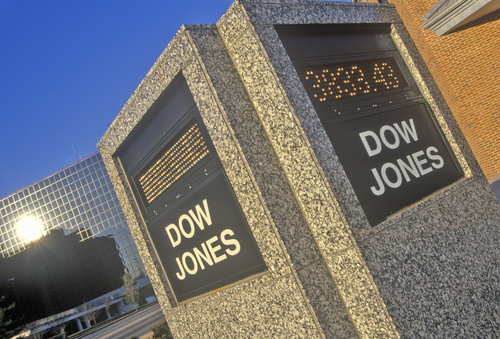 The Dow Jones Industrial Average tracks the performance of 30 large, publicly-traded U.S. companies. Known colloquially as the Dow, it is often used as a way to determine how the U.S. stock market is doing. It doesn’t necessarily track the 30 largest companies, but rather the companies that best reflect the breadth of the U.S. economy.

Many investors track the Dow Jones’ daily movements. It can be a good indicator of emerging economic trends. That’s why our team at Investment U uses this tracker for the Dow Jones today. This chart updates the Dow Jones’ movements in real time so you can always be up to date.

The Dow Jones Industrial Average, like the economy, is constantly changing. Every few years a struggling Dow component is removed and replaced with a stronger company. The Dow is designed to reflect the biggest players in the economy. So, a history of the Dow is really a history of the U.S. economy.

As you can see, the Dow Jones today is comprised of a diverse list of companies. Today’s list isn’t exactly “industrial” as the name suggests, but that wasn’t always the case. The Dow Jones Industrial Average began in 1896 when much of the U.S. economy was based on commodity production and extraction. At that time the index was made up of just 12 stocks:

In 1928 the Dow grew to 30 stocks, and it remains at that number today. Of those first 12 companies General Electric remained a member of the Dow (except for its brief removal from 1898 – 1907) all the way until 2018 when it was replaced with Walgreens Boots Alliance. It was a remarkable run and a symbolic ending. The Dow represents the changing economy. And nowadays the U.S. economy is driven by information, finance, and goods and services industries like Microsoft (Nasdaq: MSFT), Visa (NYSE: V), and Verizon (NYSE: VZ).

Can I Trade the Dow?

Technically speaking, no. The Dow is an index, not a security. In other words, it is a statistical representation of stocks, not a stock itself. However, you can invest in mutual funds or ETFs that are designed to mirror the Dow.

If you’re looking for new and exciting ways to invest though, we suggest signing up for our free Trade of the Day e-letter. Just enter your email address in the box below and hit submit!