The company has 90,000 miles of pipelines and boasts that 30% of the United States’ oil and natural gas moves through those pipelines.

Now, thanks to the collapse in anything oil-related, the stock yields a whopping 15.7%. But can investors bank on continuing to receive the distribution?

Energy Transfer’s cash available for distribution (CAD), a measure of cash flow for MLPs, had been steadily rising, but it is expected to take a detour lower this year. 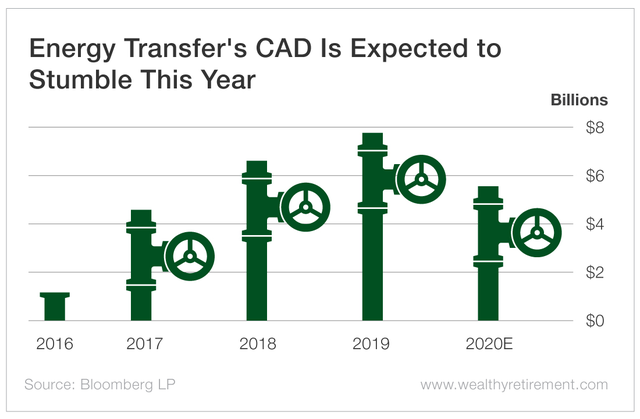 SafetyNet Pro does not like to see cash flow declining. It takes that offense very seriously and will penalize a company’s rating because if the slide continues, the company could see its distribution become unaffordable.

Energy Transfer also has a lot of debt. Its debt-to-EBITDA (earnings before interest, taxes, depreciation and amortization) ratio is 5.94. That’s a hefty debt load to support, especially if cash flow is declining.

On the positive side, the company’s payout ratio is low. Last year, it paid out just 39% of CAD in distributions. Due to the lower CAD expected this year, the payout ratio will likely climb to 59%, which is still an acceptable level.

Energy Transfer has a solid distribution-paying history. It has raised the distribution many times since it began paying one in 2006, although it doesn’t do so every year. The last raise was in 2017. It has never cut the distribution in its 15-year history of paying investors.

I’m not expecting a cut. However, the company could reduce the distribution by half and it would still have a very attractive yield of nearly 8%. So if Energy Transfer did lower the distribution, it wouldn’t be a total shock.

As you can see, Energy Transfer’s dividend safety is moderate at the moment. Therefore, it’s important to keep a close eye on this company going forward.

For more dividend insights and trends, sign up for the Wealthy Retirement e-letter below. You can gain access to the income strategies and retirement secrets of our experts today.