Par Value: What Does it Mean?

If you’re a bond investor, the term “par value” is one you’re intimately familiar with. It’s the original issue value of the bond, also called its face value or nominal value. It’s an important concept to understand because, as any investor well knows, the value of a bond can rise or fall on the open market. It’s the benchmark that determines whether it’s selling at a discount or a premium based on its interest rate.

And it isn’t just a term for bonds. It can reference the initial value of any asset that may rise or fall in value as it’s traded. It simply means “original value.”

Here’s a closer look at par value in the context of investment products, specifically bonds and other fixed income instruments that have accompanying coupon rates. 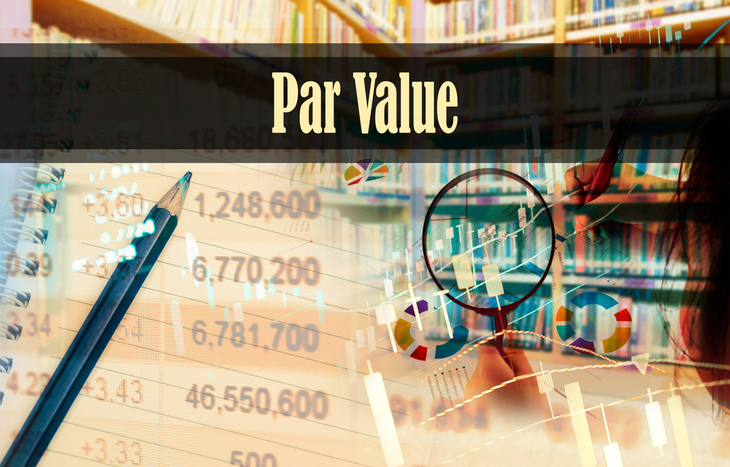 How Much is a Bond’s Par Value?

After they’re issued, bonds trade on the open market like any other investment product. The appeal of a bond is usually the combination of the value and coupon rate, which determine the interest payments for the bond. The higher they are, the more desirable the bond.

Desirable bonds trade at a premium, that is, higher than their par value. Conversely, bonds with little-to-no carrying value might trade at a discount: lower than this value. There are other factors that can dictate a premium or a discount as well, such as whether or not the bond is callable or the credit rating of the issuer. Regardless, it serves as the benchmark for determining the value of the bond at its current market rate.

The Relationship Between Par Value and Coupon

Because par value and coupon rate go hand-in-hand, issuers often consider them in tandem. The higher a bond’s value, the lower the coupon rate.

Depending on where the bond is in its maturity, investors may prize the high par value over the higher coupon rate. The younger the bond, the more coupon rate matters; the older it is, the more the par value comes into play.

As mentioned, this value is a term that applies beyond bonds. In reference to stocks, it takes on a slightly different meaning. A stock’s par value is the absolute lowest price a shareholder can redeem it for. Most companies today issue stock with this value of $0.01, sometimes fractions of a cent.

The reason for this extremely low value is to protect against liability in the event a company liquidates. Shareholders are only entitled to the par value per share, which is just a cent. If the par value was high like a bond, say, $100, the company would have a liability to pay that amount to every shareholder. By making it just a penny, a company strategically absolves itself of any real debt obligation.

Not every company records this value for shares and often, it depends on the state the company files its articles of incorporation in. Many states allow companies to issue “no par” shares, which have no value and thus, aren’t worth anything in the event of liquidation.

Par Value Says a Lot About a Bond

Par value is one of the critical variables in determining the worth of a bond—alongside coupon rate and carrying value. While a high par value might entice investors on the surface, it’s important to explore that value in the context of these other variables. As a bond comes to maturity, this value becomes a clearer and clearer indicator of its value.

Bond values may rise and fall based on market demand, but par value always stays the same. It’s a constant: something you can use as a benchmark to better understand the efficacy of an investment. For income investors, it’s an extremely important factor in deciding which bonds to invest in, and when.