A little more than a year ago, I wrote that Pembina Pipeline (NYSE: PBA) would earn a dividend safety upgrade if 2019’s free cash flow projection was on the mark.

It wasn’t. Not even close.

In March 2019, the Canadian pipeline company was forecast to generate CA$1.44 billion in free cash flow. Instead, it generated just CA$887 million while paying out CA$1.32 billion in dividends.

In other words, it paid out CA$1.48 in dividends for every CA$1 in free cash flow.

This year, free cash flow is expected to grow 10% to CA$975.3 million, which still won’t cover the CA$1.38 billion the company will likely pay shareholders.

That figure includes the cash flow generated from the portion of pipeline acquired from Kinder Morgan (NYSE: KMI) last December. 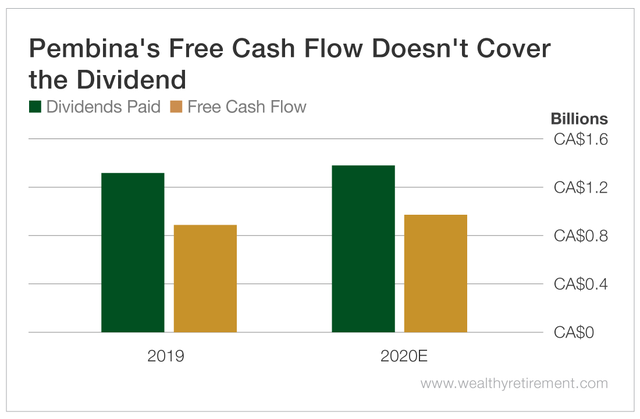 When a company doesn’t generate enough cash to pay the dividend, it must dip into cash on hand or borrow money.

Another problem for Pembina is that it has borrowed a lot of money already. The company has more than CA$10.6 billion in debt.

Its debt-to-EBITDA (earnings before interest, taxes, depreciation and amortization) ratio, a measure that we use in SafetyNet Pro, is more than 4, which is too high.

In other words, Pembina’s debt is more than four times the amount of EBITDA.

The Calgary, Alberta-based oil and gas pipeline company has never cut its dividend since it began paying one in 2010, and it has raised its dividend each year since 2012. So that’s positive.

Pembina’s cash flow doesn’t cover the dividend, and it doesn’t appear that it will anytime soon. So the company will have to go further into debt to pay shareholders.

Considering Pembina’s lack of cash flow and high debt load, the dividend cannot be considered safe. In fact, the stock not only failed to get an upgrade from last year, but also has fallen two notches to the lowest rating for dividend safety.

As you can see, Pembina stock is not safe at the moment. Keep a close watch on the pipeline company’s dividend going forward.

For the latest market analysis, sign up for our daily e-letter below. The Wealthy Retirement experts will provide you with up-to-date market tips and trends.