The most critical aspect of SafetyNet Pro‘s model is free cash flow – or a surrogate for cash flow specific to certain types of companies, like real estate investment trusts (REITs), banks, etc.

But most utilities, despite years (and, in some cases, decades) of sustainable dividends, don’t have positive free cash flow. Their capital expenditures are so high that they usually don’t generate any free cash flow.

Utilities have plenty of cash flow from operations, which is, in fact, somewhat predictable (present pandemic excluded), as their product is regulated. But the high costs of maintaining their facilities mean that they usually bleed cash from running their businesses.

So the dividend is sustained by borrowing money.

This system has worked for many years for a lot of companies in the sector.

But SafetyNet Pro is conservative. It’s designed to warn you of a problem before it happens. So these companies with negative free cash flow get penalized when it comes to their rating.

That brings me to Southern Company (NYSE: SO).

The Atlanta-based electricity and natural gas provider is a blue chip stock that has boosted its dividend every year for 19 years in a row.

The company has sustained or raised the dividend every year since 1948. 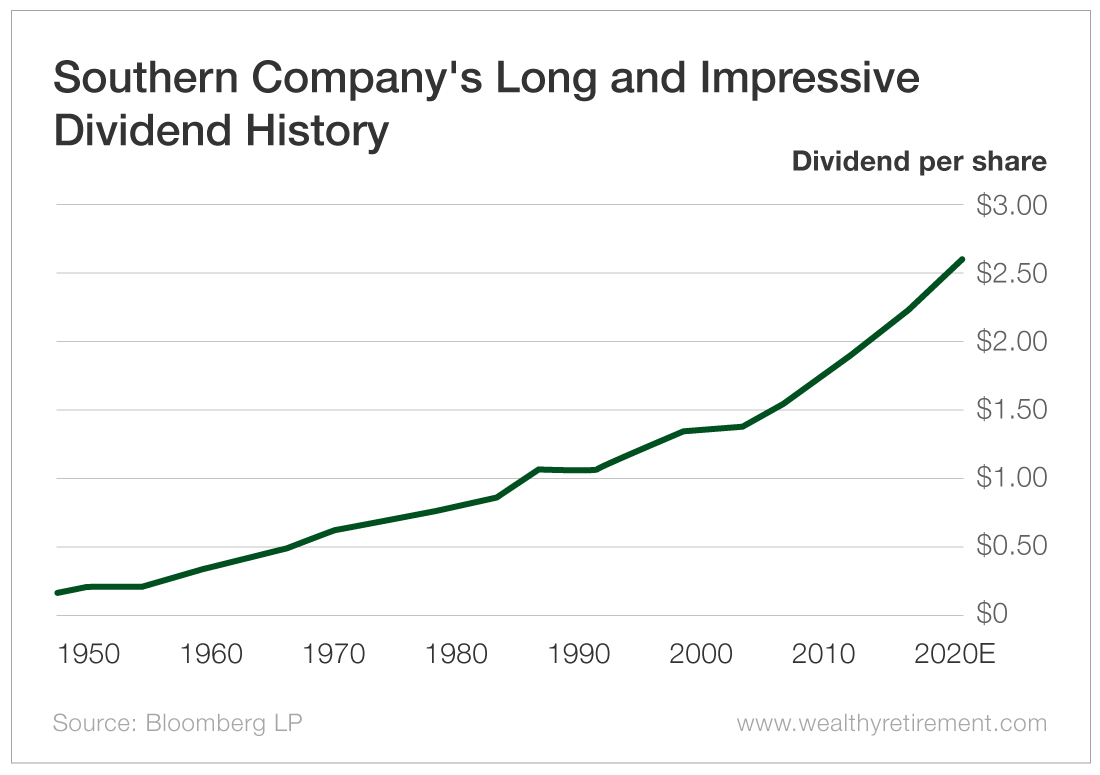 When Southern Company started paying its dividend, Harry Truman was still the president. It was the year Babe Ruth passed away and the 33 1/3 RPM record was introduced.

Remember those? I still have mine from high school.

That’s a heck of a track record (Southern Company’s dividend history – not my keeping my AC/DC albums from when I was a teenager).

Management also stated that it has ample liquidity to protect the dividend, indicating it is not particularly interested in ending the 72-year streak.

Add all that history to the fact that in 2020, Southern Company is forecast to produce $3.25 billion in free cash flow after years of reporting negative numbers.

The payout ratio will still be a little too high. The company will likely pay out about $2.68 billion in dividends. So if it generates the $3.25 billion in free cash flow that Wall Street predicts, it will cover the dividend, though it won’t have a wide margin for error.

Southern Company will likely pay shareholders $2.56 per share this year for a 5% yield on the current price.

I suspect management will do everything in its power to make sure 2020 is year 73 without a dividend cut.

As you can see, the Southern Company dividend safety is moderate at the moment. This is one to watch going forward as utilities always take on tougher grades from SafetyNet Pro.

For the latest dividend insights, sign up for the Wealthy Retirement e-letter below. The free e-letter gives you expert stock analysis and retirement strategies unlike anywhere else.