There are few names as synonymous with the design industry as Adobe. This brand recognition and dominance has allowed Adobe stock to thrive over the past 34+ years. In fact, since its IPO back in August of 1986, Adobe (Nasdaq: ADBE) has gone from less than $1 a share to an all-time high of $536.88 a share. To put things in perspective — a $5,000 investment in Adobe back in August of 1986 would be worth over $12 Million today (including all dividends reinvested). 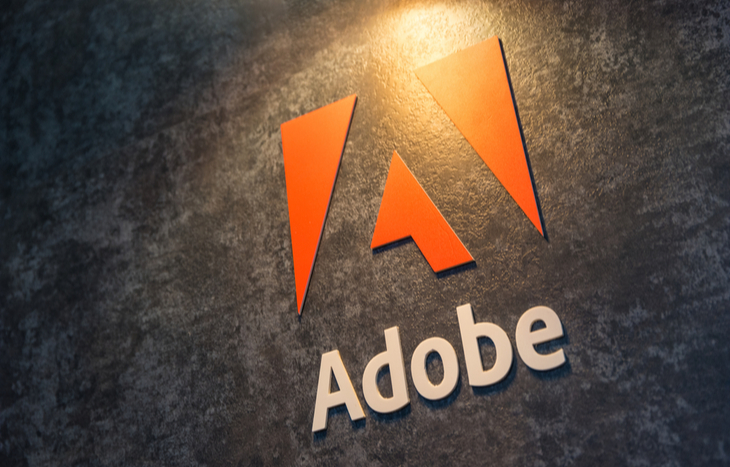 If you take a more recent look at ADBE stock, you’ll see this year did not start off as strong as many expected. On March 8th, shares dropped to $421.20 when the stock hit an RSI reading of 28.7. RSI or Relative Strength Index is a strong technical indicator that measures the level of fear associated with any given stock on a scale of zero to 100. Stocks that fall below 30 are considered to be oversold.

This news may have been alarming to many ADBE shareholders. However, many bullish investors saw this as an opportunity to “buy the dip” and decided to acquire more shares at a discounted price. But, those that bought or held continue to reap the benefits as analysts project Adobe’s current quarterly sales to top $3.73 billion. This represents a 9.2% annualized increase (up from $3.13 billion in the same quarter of 2020). However, some estimates have projected as high as $3.80 billion.

ADBE stock is currently on a 17% rally, since its early March drop. But, there is still decent upside moving forward towards the 505 level, where it will once again be tested. Some investors remain pessimistic as there has been somewhat of a drop off in institutional buying pressure. ADBE currently holds an RSI reading of 73.46.

As with any major corporation, there have been negative issues surrounding the design giant over the years. Unfair prices, ongoing security problems, customer data breaches and competitive pricing have drawn some of the more major criticisms. These issues are not only a problem for Adobe, but continue to affect practically every major tech company. For instance, tech giants like Facebook, Amazon, Google and Apple have all drawn recent criticism for anti-competition practices.

Regardless, these minor setbacks have had little to no affect on the growth of Adobe stock, which continues to soar. In fact, since 2012 Adobe stock has had explosive annual percentage increases, with no signs of stopping.

As the industry currently stands, you would be hard-pressed to find a design team that isn’t firmly rooted in Adobe’s creative suite. The company’s flagship product Photoshop, is currently used by over 90% of the world’s creative professionals. More than 300 billion PDFs have been opened with Adobe products in the last year. The list goes on and on. And with $12.87 billion in yearly revenue for 2020, the San Jose based software company and its ADBE stock are here to stay.

In a recent interview with CNBC, Boris Schlossberg, managing director of FX strategy at BK Asset Management had this to say… “I absolutely love Amazon, Adobe and Zoom for one very simple reason. That’s because all these companies are essentially subscription-based companies with very, very loyal customer followings and an absolutely market-dominant position.”

Schlossberg went on to say that Adobe’s software portfolio is a “fortress-like business.”

With more than 20+ desktop and mobile apps that span design, photography, web, video and more — Adobe’s creative cloud is a force to be reckoned with. Here are some of Adobe’s more recognizable products and services.

Creative cloud gives you more than just desktop and mobile apps. Tools like Behance, Adobe Portfolio, Adobe Live, Adobe Fonts, Adobe Color and Adobe Stock are all designed to enhance and support the creative experience of amateurs and professionals both in the U.S. and across the globe.

Adobe continues to make forward thinking moves that impress. The most notable of which was their fore-mentioned transition from a licensed software company to a fully cloud-based company. The reason this was so successful for Adobe was because of their careful attention towards consumers and shareholders. In fact, it was as early as 2011 that Adobe announced the intention to move towards SaaS (Software as a Service). Consequently, this news was met with hostility by many. But, Adobe’s methodical process allowed users and stakeholders to process the change over a six year period.

Another impressive move of Adobe’s started in 2014, when they partnered with Microsoft to create a more united vision for open data.

“Adobe and Microsoft are joining forces with SAP to form the Open Data Initiative. The Initiative is open and extensible and reimagines what customer experience management can be. Now you can get a complete picture of your customer with a seamless flow of connected behavioral, transactional, financial, and operational data to understand what your customers need in real time.”

Over the years the two tech behemoths have worked together on a number of large scale projects including the integration of Adobe’s PDF services into Microsoft’s Office 365 product suite, OneDrive and Sharepoint. Additionally, they’ve collaborated to develop a better version of Photoshop for touchscreens and a slew of other integrations.

What Does the Future Hold for ADBE stock?

Adobe CEO Shantanu Narayen said it best – “If you can connect all the dots between what you see today and where you want to go, then it’s probably not ambitious enough or aspirational enough.”

Next ADBE Earnings Date: ADBE is expected to release earnings on Jun 17, 2021.

Most importantly, to stay up to date with Adobe stock, tech stocks in general and more, sign up for our free Trade of the Day e-letter now. Trade of the Day’s Bryan Bottarelli has built a career around his unique ability to identify opportunities and leverage those investments. Join today and start marketing smarter, more profitable investing decisions.