Understanding American Depositary Receipts and How They Work

You love the prospects of an overseas company and want to invest in it. The problem? That company isn’t listed on any of the U.S. stock exchanges. How can you put your investment dollars behind a company listed on a foreign exchange without access to it directly? The answer is through American depositary receipts (ADRs).

ADRs represent a transparent, safe way for investors to interact with global companies that may not want or be able to list on U.S. exchanges. They’re a great opportunity for these companies to access U.S. capital markets and for U.S. investors to broaden their scope of investments. Here’s how American depositary receipts function to make markets more accessible for both parties. 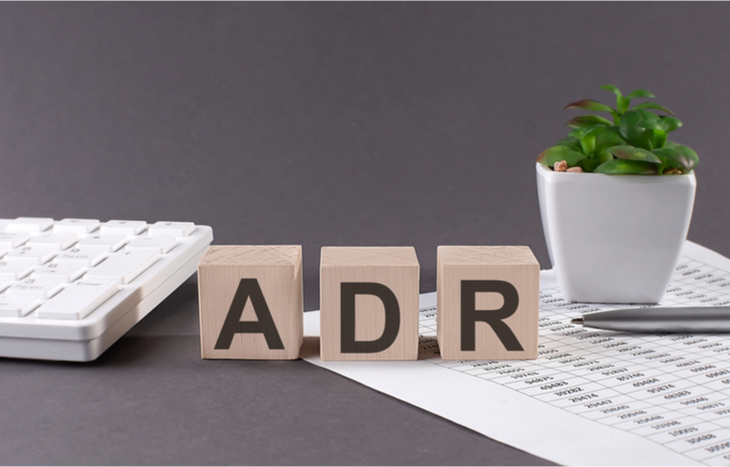 What Is an American Depositary Receipt?

An ADR is not a stock certificate. As its name implies, it’s a receipt or a certificate representing shares of stock. You don’t own the underlying security; you own the rights to it. This allows investors access to the equity of foreign companies without handling the physical shares – which may be difficult to buy or sell without a domestic market for them.

ADRs entitle the holder to any capital gains or dividend payments a shareholder might have access to. In this way, they’re virtually the same as direct investment in the company. The chief difference? ADRs don’t often come with voting rights (although some do).

How Does an ADR Work?

ADRs come about when a broker purchases shares of a foreign company on its home exchange then delivers them to a custodian bank. Then a depositary bank issues ADRs proportional to the value of shares held by the custodian bank. Typically, this is a one-to-one issuance; however, it could be more or less depending on currency differences.

Once issued, ADRs can trade on U.S. exchanges in a similar fashion to stocks. They’re also available OTC. They’re quoted and paid for in U.S. dollars, and the share price (ADR price), dividend payouts and other financials are all in U.S. dollars, as well. To the average investor, ADRs behave indistinguishably from stocks, which makes them very accessible and enticing.

There are two specific types of ADRs: sponsored and unsponsored. The ADRs themselves don’t behave any differently – instead, the difference comes in how they’re viewed by the company they represent.

In many cases, it’s in the best interest of a foreign company to sponsor ADRs. It makes the ADRs themselves more attractive investments to U.S. buyers, who may see support from the company as a positive indicator.

Whether sponsored or unsponsored, there are also three levels of ADRs available to investors. The level indicates not only how stable and trustworthy the investment is, but also how it behaves as a capital-raising vehicle for foreign companies.

The Pros and Cons of Investing in ADRs

ADRs represent tremendous opportunity for investors when it comes to exposure to foreign companies. Rather than going to a foreign exchange, U.S. investors can hold the ADR in place of a direct investment to experience the same benefits with greater liquidity. They’re easy to track and trade – even OTC. Moreover, everything is in U.S. dollars, which takes the headache of currency conversion out of the equation.

For foreign companies, the benefits are similar. Sponsoring an ADR and supporting investors with filings and releases brings confidence and transparency to the process. It also boosts investor confidence, which encourages more investment. Level III ADRs are also capital-raising vehicles, which makes tapping into U.S. investment dollars even more convenient.

The drawbacks of ADRs largely fall on investors and are marginal. Selection is perhaps the biggest drawback in that not all foreign companies are accessible – only those offered by brokers who’ve purchased foreign shares. Unsponsored ADRs also carry some risk since they’re not directly supported by the company they represent. Finally, investors could face double taxation on dividends and capital gains if the depositary bank doesn’t withhold the funds necessary to cover foreign taxes.

American depositary receipts are a great investment for anyone seeking relatively safe exposure to foreign companies. The accessibility and liquidity of ADRs makes them an easy addition to most portfolios. And the performance of foreign markets can be a great hedge against domestic market turbulence. If you believe in the prospects of a foreign company, ADRs are perhaps the best way to invest in them.