To start this Apple stock forecast, let’s look at unique comparison. Apple’s stock price has had a great run and it might just be getting started…

Despite being selected 199th overall by the New England Patriots in the 2000 NFL Draft, Tom Brady quickly rose through the depth chart. In his second year, he became the starter and never looked back. He started the next 18 seasons, winning 17 division titles as well as six Super Bowl rings. At 44 years old, Tom Brady is now one of the oldest players in the NFL. However, that didn’t stop him from joining the Tampa Bay Buccaneers in 2020 and winning yet another Super Bowl (number 7).

Each year after Tom Brady wins, people are quick to start doubting that he can continue his success. Searching for excuses, they’ll say that he can’t win without valuable teammates, he’s getting too old, or that he can’t win on a new team. Despite these predictions, Tom is fresh off a Super Bowl win (as well as Super Bowl MVP) and shows no signs of slowing down. If I had to assign one company as “The Tom Brady of Stocks” it would be Apple.

Apple was started back in 1976 by Steven Jobs, Steve Wozniak and Ronald Wayne. Despite humble beginnings, they quickly wowed consumers with their sleek technology. The company has grown at an incredibly quick pace since then and it feels as though each success is followed by an even bigger success.

Just like Tom, analysts can be quick to write-off Apple each year. They’ll say that its products don’t perform as well as competitors, that its best years are behind it, or that Apple’s stock is overpriced. However, Apple shows no signs of slowing down. It recently passed $2 trillion in market cap and is the world’s biggest company by market cap. It’s also one of the world’s most valuable brands.

So does this mean that Apple stock is a buy for every investor? Maybe! Let’s take a quick look at where Apple is at as a company as well as an Apple stock forecast… 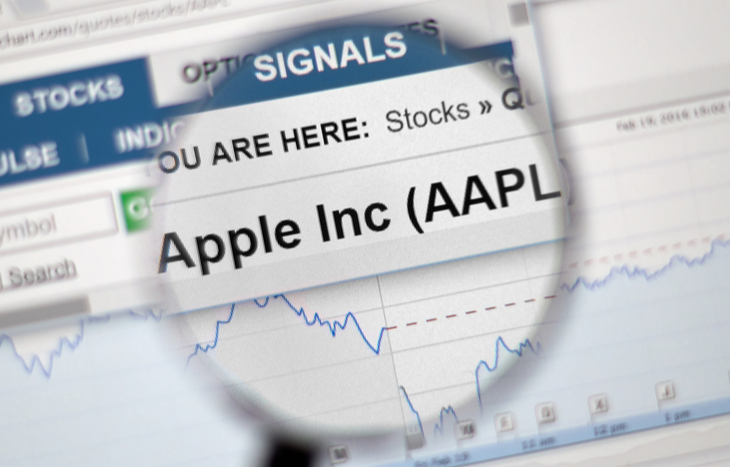 Just like Tom Brady, Apple’s stock has experienced win after win over the past few decades.

Wait, hasn’t most of the decade been disrupted by a once-in-a-lifetime global pandemic? Wasn’t there talk of supply chains shutting down? Weren’t non-essential businesses forced to close? I guess none of that mattered for Apple’s stock!

To make a forecast for Apple’s stock, we need to see what changes it has in store for the future. To do this, let’s examine the ways that Apple makes money.

Apple mainly generates revenue from the sale of consumer technology like phones, laptops and wearables. Notably, its iPhone makes up close to 50% of its total revenue. Since its total revenue was $274 billion in 2020, this means that approximately $140 billion came from sales of the iPhone. For reference, this is more than the total market capitalization of Target.

Other Apple major products include Apple Music and Apple Pay.

It’s a testament to how big Apple is that these two final products are almost considered afterthoughts. However, they’re both incredibly competitive in their industry. It’s almost as if to say “Oh yeah, Apple also does that Apple Pay thing”, which casually has more users than the entire U.S. population.

When you’re one of the largest companies in the world, your side projects are worth more than entire companies.

So what predictions can we make about Apple’s stock moving forward?

My Apple stock prediction is definitely a rosy one.

Apple’s products have been incredibly popular for years and this trend is likely to continue. Even early data suggests that many people (53%) are interested in upgrading to the iPhone 13 from phones that are just a few years old. Barring some type of colossal cultural shift in thinking, Apple should continue to dominate in the electronics industry. This will be very good for Apple’s stock over the next few years.

With that said, there are always risks looming around the corner.

The biggest risk to this Apple stock forecast is the potential for increased regulations as well as lawsuits. The more it dominates, the more it seems like a Monopoly. A House Judiciary subcommittee has already stated that the App Store gives Apple too much power to favor its own apps over others.

Apple also recently lost an intense lawsuit with Epic Games in Australia. Epic Games bypassed Apple’s 30% App Store tax by listing the app for free and requiring users to pay once it was downloaded. This prompted Apple to remove the app from its store. Epic Games immediately sued and ended up winning the court case. This could set a precedent for how Apple operates in the United States.

Additionally, many politicians like Alexandria Ocasio-Cortez and Elizabeth Warren are pushing for major tech platforms to be broken up. And depending on those efforts, the outlook for Apple stock can change.

Is Apple Stock a Buy?

So, is Apple stock a buy? As usual, this answer will vary based on your own due diligence and risk tolerance. However, there are probably very few financial analysts who will advise you against buying a little Apple stock.

It posted total revenue of $274 billion in 2020, somehow increasing revenue by 5% in the middle of a pandemic. Through two quarters in 2021, it’s on pace to clear $320 billion in revenue for the year. Oh yeah, Apple also has nearly $200 billion in cash and marketable securities.

Even if it’s forced to make changes to its App Store, the bulk of its profits comes from the sale of iPhone anyway. “Regulating big tech” has also been a talking point in politics for years but, so far, very little progress has actually been made.

I hope that you’ve enjoyed my Apple stock forecast! And as always, please do your own due diligence before investing. You might also be interested in these top semiconductor stocks with the recent chip shortage.

If you’re looking for even more investing opportunities, sign up for Liberty Through Wealth below. It’s a free e-letter that’s packed with tips and tricks. You’ll hear directly from bestselling author and investment expert Alexander Green. He’s also worked as an investment advisor, research analyst and portfolio manager on Wall Street for 16 years.