What is Average Annual Growth Rate?

Investing is a forward-looking discipline. Before you invest in something, you want to know that it’s going to deliver a good return over the time period that you hold it. Unfortunately, no one has a crystal ball that tells the future. So, to make an informed decision, we often use past data to inform future predictions. A great example of this involves using Average Annual Growth Rate (AAGR) to assess the trajectory of a company.

Average Annual Growth Rate represents the yearly average growth of an investment, not accounting for compound interest. It’s meant to benchmark an anticipated return for a given year, using a historical average to set the standard. For example, if a company has returned an average of 10% over the last five years, it’s reasonable to think that it’ll return 10% next year too.

While it’s not a perfect metric, AAGR is one that’s frequently used by investors to set expectations for their investments, both current and prospective. 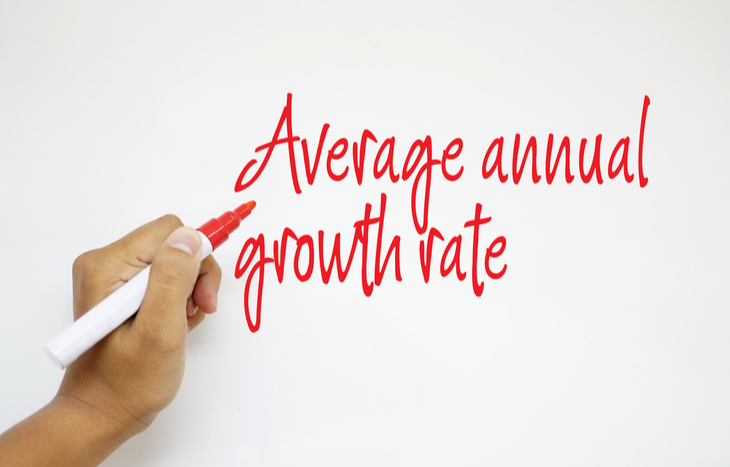 Because it doesn’t take compounding into account, calculating an investment’s AAGR is relatively straightforward. You simply add the average return for each period in a given timeframe, then divide the product by that same number of periods. The formula looks like this:

This formula expands to accommodate as many periods as is necessary to get a clear average for an investment’s performance over time. For example:

In this example, it’s reasonable for the investor to speculate an 8.8% return on paper, based on historical performance. Keep in mind that AAGR is independent of any other metrics, and this figure is a pure average based on the chosen time horizon.

As the name suggests, Compound Annual Growth Rate factors in the compounding effects of each consecutive period into the average growth. AAGR is a linear calculation; CAGR is an exponential one. Using the example from above:

The difference occurs because CAGR factors in the growing principal balance year over year. This is often the preferred metric for understanding the true growth of an investment as the returns fluctuate from year to year. If the principal balance doesn’t get smaller, compound interest will continue to extrapolate returns.

What is Average Annual Growth Rate Used For?

While CAGR works to smooth out ups and downs, and incorporate reinvested principal, AAGR is often preferred for long-tail evaluations of a company and speculation about its future trajectory. For example, an investor might use CAGR to extrapolate five-year trailing returns into a picture of a portfolio’s next years’ returns. Meanwhile, they might use AAGR to look at a company’s revenue growth over the same time period, as a metric for evaluating the investment.

Simply put, AAGR is a more accurate metric for growth when compound interest isn’t a factor. It’s a linear method of looking at expected future returns if the principal balance isn’t compounded.

Aside from the fact that it doesn’t account for compounded interest, there are a couple of other glaring limitations of AAGR. The biggest is that it doesn’t account for volatility. For example, an investment might have returns of 30%, 2%, 5% and 25%, resulting in an AAGR of 15.5%. However, this isn’t indicative of what an investor might expect from such a boom-or-bust investment. The average isn’t true because it’s largely outliers.

Another limiting factor of AAGR is that it doesn’t paint an accurate picture of cyclical returns because it can’t account for timing. For example, a business that sees most of its revenue in the summer months will reward shareholders during that time, while remaining stagnant throughout the rest of the year. AAGR only takes into account the final annual growth, which, though it might be positive, isn’t indicative of the full-year performance of the investment.

A Look at the Future Potential for Growth

There is no crystal ball that allows us to look into the future to see investment performance. However, when applied correctly, Average Annual Growth Rate can be a stalwart metric for benchmarking potential upcoming performance. Investors can apply AAGR to everything from their own portfolio returns to evaluation of a company’s growing revenue and profit. It’s a useful linear metric that boils down change over time into a single, simple figure.

Investors should get into the habit of using both AAGR and CAGR to better-understand investment trends. Using these numbers to extrapolate figures into the future is about as close to clairvoyance as an investor can get, assuming the investment stays on-trend, of course.