Originally posted May 26, 2020 on Wealthy Retirement

Twelve to 18 months from now, we could be looking back at American banks as the no-brainer buying opportunity of this crisis.

Most importantly, banks are strong financially – so they’re able to handle the loan write-offs that the current downturn will create.

But also, by one measure, the financial sector is the cheapest it has ever been relative to the overall market. 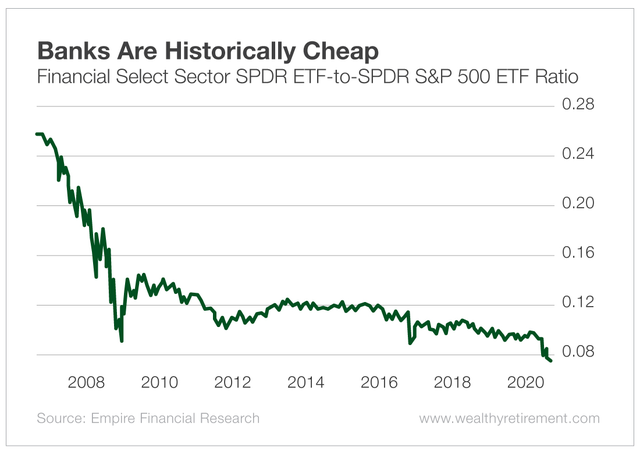 At 0.074, this ratio is the lowest it has ever been – well below where it was at the very bottom of the global financial crisis.

That was a point when many financial institutions were bankrupt and bank balance sheets were loaded with garbage housing-bubble-era mortgages.

Yes, like in 2008, the economy is weak. But unlike in 2008, bank balance sheets are very strong – perhaps the strongest they have ever been.

Instead, what has pushed this ratio down to this all-time low is how stock prices have reacted to the COVID-19 crisis. While the now tech-heavy S&P 500 has held up very well, the financial sector and especially American banks have sold off hard.

While the S&P 500 is down less than 9% on the year, the financial sector (the Financial Select Sector SPDR ETF) is down 29%. The American banking sector, as represented by the SPDR S&P Bank ETF (NYSE: KBE), is down even further, registering a 38% decline. 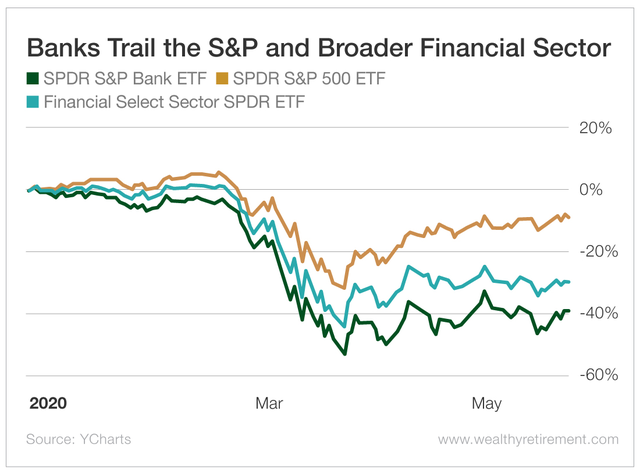 We need to look at the SPDR S&P Bank ETF to fully appreciate how beaten-down the share prices of banks are.

Bank Stocks Are Down, but Their Long-Term Value Isn’t

I don’t think the bank stocks are bargains just because they’re down a lot. Stocks can be down for very good reason.

For example, the airline sector is down even more than the financial sector, but I don’t think those stocks are worth buying today because I believe their long-term earnings power has been reduced.

I like bank stocks because their share prices are lower and because I don’t think that their long-term earnings power has diminished significantly. Two years from now, I think most of these banks could be earning just as much as they did in 2019.

During the financial crisis, bank stocks were not the place you wanted to be as investor. Back then, their balance sheets were black boxes stuffed with loans that were given out during an era of terrible underwriting standards.

Since the financial crisis, the balance sheets of the entire sector have been recapitalized, loan underwriting standards have been upgraded, leverage levels have been reduced and regulators have stayed on top of banks like never before.

Bank balance sheets today have the ability to handle the loan losses coming at them. The industry is better prepared to handle a deep recession than at any time in living memory, yet the market has taken these stocks out to the woodshed like it’s 2008 all over again.

Now, to be clear, bank stocks are not a short-term trade. They are going to have a rough stretch of earnings that could last 12 to 18 months. There will be bad loans to be written off.

On the other side of that, though, I think they can recover to where they were trading before the pandemic because their earnings will recover.

If bank share prices follow earnings back up, the SPDR S&P Bank ETF would see a move from $29 today to almost $50, which represents 72% upside for the entire sector.

That would be a pretty sweet return over 18 months to a couple of years. Better still, I don’t think the sector carries a lot of risk if you diversify widely across it.

For a look at how cheap the banks are on a fundamental valuation basis, we can take a quick look at Wells Fargo (NYSE: WFC).

Historically, banks like Wells Fargo have traded at a decent premium to book value.

The chart below shows that in the lead-up to the COVID-19 outbreak, Wells Fargo traded within a range of 1.2 times to 1.6 times book value – and that for most of the period, it was closer to the higher end of that range. 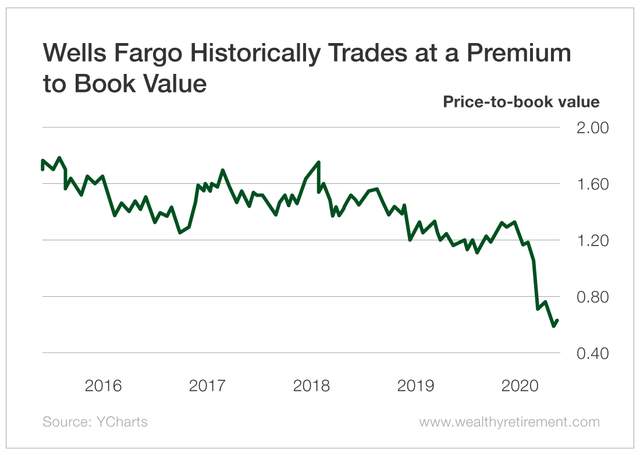 Today, Wells Fargo trades at 0.62 times book value. That is less than half of where this dominant banking franchise has historically traded on average.

That is, again, roughly a 50% discount compared with the norm, and it suggests that the sector could double if its long-term earnings power isn’t compromised as we get through the next 18 months.

For the patient investor, there are more-than-solid returns to be earned from buying and holding a diversified basket of banks today.

There will be a few tough quarters coming for bank earnings, but I believe those are more than priced into these stocks. Once the economy is clearly improving, owning these companies is going to be a lot of fun. 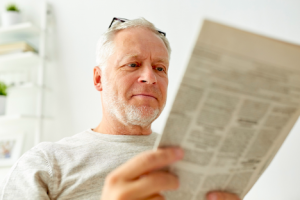 The ONE Index You Need to Track 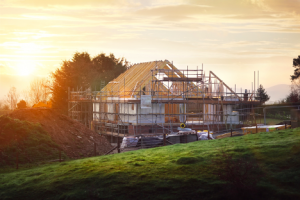 A Long-Term Opportunity in This Fixer-Upper Industry