What is a Callable Bond?

When companies and governments issue bonds, they do so with a specific maturity date attached to the bond. For example, a five-year corporate bond will pay interest for five years before it’s redeemable for the face value. Someone buying and holding this bond is guaranteed interest payments for the term of the bond. Unless, of course, it’s a callable bond.

While callable bonds come with a maturity date, the issuer can actually recall the bond before that date. The bondholder misses out on any remaining interest payments, but receives the bond principal back early. Callable bonds add a layer of complexity to an income investment strategy, and it’s important for bondholders to understand the terms attached to them.

Here’s a closer look at callable bonds, sometimes called “redeemable bonds:” how they work, the nature of these bonds and the pros and cons for investing in them. 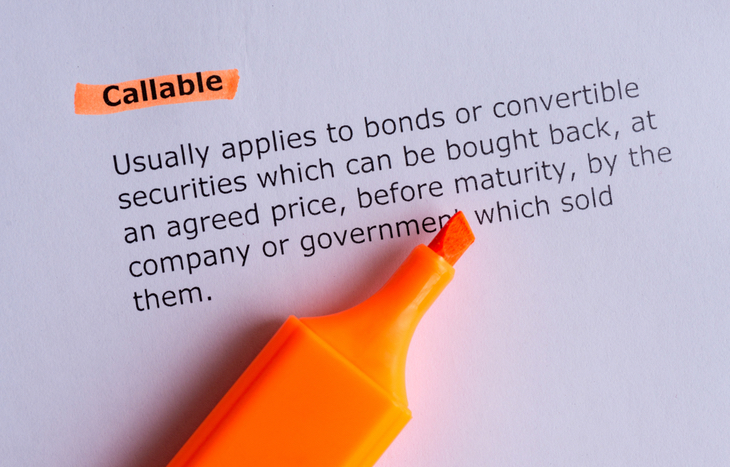 Callable bonds effectively give the issuer the right to pay back the bond’s principle early. Outside of this, most callable bonds work exactly like any other investment-grade bond. That is to say, these bonds carry an interest rate, par value and maturity date, and will pay coupon payments based on these variables.

If triggered, the call feature of the bond instantly cuts the term short and cancels any outstanding interest payments. For example:

Maisie buys a $10,000 three-year callable bond with an interest rate of 5%. Then, after two years, the issuer triggers the call feature. Maisie receives her $10,000 back (face value). However, instead of receiving cumulative interest payments of $3,000 over the life of the bond ($500, six payments), she only received $2,000 in total interest.

While the downside is clear, the upside for investors is that callable bonds come with higher-than-average interest rates.

What Kinds of Bonds are Callable?

There are several types of callable bonds, stipulated by the type of call actions associated with them. Some of the most common include:

Bond investors should check the bond’s prospectus and indenture to review call provisions before they invest. Here, the bond issuer will lay out the specifics of callable actions and the terms required to initiate them.

It’s important to note that some bonds are never callable. Specifically, Treasury Bonds and Treasury Notes aren’t callable in any capacity.

Corporations and municipalities typically issue callable bonds with attractive interest rates, an incentive for investors to consider them. For income investors, callable bonds actually pose a risk: if the issuer recalls the bond early, they lose out on the remaining interest payments. A higher bond interest rate can mitigate that risk.

ABC Company issued five-year callable bonds in the amount of $100 million, with an interest rate of 5%. In year three, market interest rates drop to 2%, allowing ABC Company to refinance its $100 million debt. The company “refinances” and triggers the call feature of the bonds, paying back premiums to effectively cancel the bonds.

In this scenario, the risk to investors isn’t only that they lose the remaining interest payments attached to the bond; they also lose a high-yield bond. If they’re engaged in a bond laddering strategy, a callable bond can disrupt cash flows.

Because the callable nature of these bonds represents a fairly significant level of investment risk for income investors, it’s also important to understand call protection. This refers to the period of a bond’s term in which the issuer cannot recall it, save for extraordinary circumstances. Most of the time, issuers will specify a certain period in the life of the bond where investors have call protection. For example, a five-year bond might have two-year call protection.

Call protection effectively guarantees interest payments during this period of the bond’s term. It’s a critical factor when determining the bond yield. For example:

Investors often use call protection to determine the levels of risk and reward associated with a particular bond, given the variables at play.

Bonds are largely a safe, conservative investment; however, they’re not without some level of risk. Callable bonds represent a higher-risk investment for income portfolios. While they also offer high reward in the form of high interest rates, the chance they’re recalled early could erase any prospect of future profits.

Callable bonds aren’t a great idea for long-term bond strategies like laddering. That said, they can be very lucrative options for short-term investors who choose to capitalize on high rates, then sell these bonds at a premium in the market.