How a Cash Balance Plan Can Help You Retire

Traditional defined benefit plans like pensions are vanishing. But that doesn’t mean employers are giving up on retirement plans. One of the more popular replacements has been a cash balance plan.

The slow death of pension plans has been a long time coming. But their demise was significantly sped up by the subprime mortgage crisis. Since 2009, several U.S. cities, counties and large firms have switched to cash balance plans. 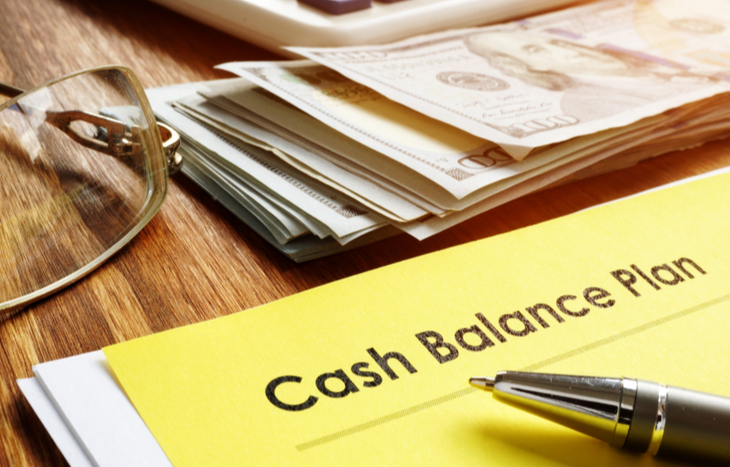 One of the main reasons for the switch is so that these local governments and businesses can reduce cost. But that doesn’t mean employees are getting the short end of the stick. In fact, the cost savings from the switch to this new type of plan hasn’t proven to be very significant.

However, the tax advantages can be a big boon for those preparing to retire. And they can take some of the heat off of companies used to funding massive pension funds. Because in this type of retirement plan, each participant has their own account.

How a Cash Balance Plan Matures

A cash balance plan grows annually in two ways. The first is via the traditional means of contributions. Employee and employer-matched contributions make up the lion’s share of an account’s growth. They are also the beneficiaries of what’s called an “interest credit.”

Interest credits come in a couple of varieties. Some accounts are built around a fixed rate. In this case, an account might see a 5% (or thereabouts) APR. While that might not be outstanding growth, it certainly beats keeping the money in a savings account. The other kind of interest credits are of the variable variety. Sometimes they can be attached to other financial hallmarks like the 30-year Treasury rate.

How They Are Managed

Compared with a traditional 401(k) plan, a cash balance plan is usually more expensive to establish. Most businesses contribute somewhere in the realm of 5% to 8% of employees’ pay… Whereas the average 401(k) match is 4.7%.

On top of that, businesses need to pay an actuary to certify that the cash balance plan is suitably funded. Then there are setup fees, administration fees and investment-management fees, all of which can add up quickly. And yet, they’re still cheaper to maintain than traditional pension plans. This is because the company can take an above-the-line tax deduction of contributions.

And on the employee side of things, there’s less risk because cash balance plans are insulated from the ebbs and flows of the markets. This makes it much easier to anticipate how much you’ll have in your plan come retirement age and plan accordingly.

The Tax Benefits for Employees

But this retirement plan really shows its strength when it comes to taxes. When paired with a 401(k), participants get to defer taxes on contributions until retirement. And come retirement age, the income earned could be at a much lower income rate.

Those who use a cash balance plan also get to decide how much income to withdraw during each year of retirement. Or they can choose to pull the money out in one big lump sum… though that will of course raise the tax burden.

Another less-explored benefit is that this type of plan is an IRS-qualified retirement plan. This means that assets in the account are protected from creditors even in the event of bankruptcy. This is another reason it’s a good idea to build a nest egg in a cash balance plan. Because it will be protected for retirement or you can pass it on to heirs.

Contributions made to a cash balance plan are age-dependent. The older the participant, the more they’re allowed to contribute. For example, a 55-year-old can peel up to $166,000 off their salary and put it into their plan. For a 65-year-old, the limit is $225,000. That can add up to some serious tax relief for those approaching retirement age.

These age-based restrictions were put in place because the older a person is, the less time they have to save for retirement… and possibly max out to the $2.6 million figure allowed in a cash balance plan.

The Drawbacks of a Cash Balance Plan

Like other retirement plans, it makes sense to leave that money untouched until you’re at least 59 1/2. But unlike a 401(k), you can’t make a partial withdrawal early in the event of an emergency. You can take out the entire vested amount though. That being said, you will have to pay taxes on the entirety of the withdrawal, as well as a 10% IRS penalty if you’re younger than 59 1/2.

Because the assets in a cash balance plan can compound at a significant rate, it’s possible to stockpile a significant amount of savings in a short period of time. This is especially valuable for older workers looking to boost retirement savings while reducing their tax burden.

But cash balance plans operate in an all-or-nothing capacity until retirement. So pulling out money for an emergency can pose major problems.

Still trying to figure out what kind of retirement plan is right for you? Sign up for the Wealthy Retirement e-letter below. By doing so, you’ll be putting yourself on the path toward financial freedom while picking up some useful investment opportunities.