Charlie Munger is a legendary investor and thinker. He has a proven track record of success and has also shared many insights over the years. There’s a lot we can learn from his wise words. That’s why I’ve put together this list of some of the best Charlie Munger quotes.

To start, let’s take a look at Mr. Munger’s background. This can help put the following quotes in a little better context… 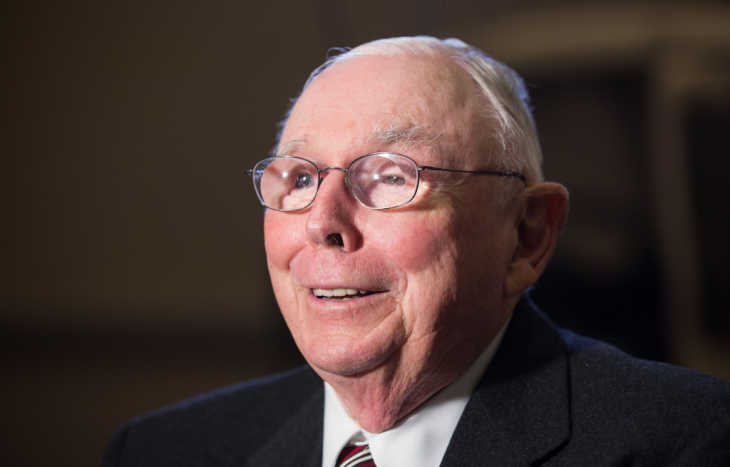 Who is Charlie Munger?

Charlie Munger was born in Omaha, Nebraska in 1924. And as a teenager, he worked at a grocery store owned by Warren Buffett’s grandfather.

Charlie Munger began studying mathematics in college. Although, in 1943 he dropped out to serve in the U.S. Army Air Corps. He received a high classification test score and was ordered to study meteorology.

Over the next decade or so, Charlie Munger practiced law. But then shifted to managing investments and real estate development. He ran an investment partnership of his own from 1962 to 1975. And during that time, he helped generate compound annual returns of nearly 20%. That’s compared to a 5.0% annual rate for the Dow. That’s an impressive feat!

Although, most people searching for Charlie Munger quotes likely first heard his name in association with Warren Buffett. So here are some top Warren Buffett quotes for even more investing insight. Munger has been Buffett’s right hand man for many decades and he’s the vice chairman of Berkshire Hathaway (NYSE: BRK.B).

On top of that, Munger is also chairman of the newspaper publisher Daily Journal (Nasdaq: DJCO) and sits on the board of Costco (Nasdaq: COST).

Over many years, Charlie Munger has proven to be a great investor and thinker. He’s established and shared some useful mental models. So, without further ado, let’s dive into some of his quotes…

1. Those who keep learning, will keep rising in life.

2. I think track records are very important. If you start early trying to have a perfect one in some simple thing like honesty, you’re well on you way to success in this world.

3. Remember that reputation and integrity are your most valuable assets – and can be lost in a heartbeat.

4. Our ideas are so simple that people keep asking us for mysteries when all we have are the most elementary ideas.

5. You’re looking for a mispriced gamble. That’s what investing is. And you have to know enough to know whether the gamble is mispriced. That’s value investing.

7. If you want to succeed in investments, start early and try hard and keep doing it. All success comes that way, by and large.

8. The big money is not in the buying or the selling, but in the waiting.

These last two quotes focus on playing the long game. If you want to see how your investment portfolio can grow, check out our free investment calculator.

9. You’re paying less to brokers, you’re listening to less nonsense, and if it works, the tax system gives you an extra, one, two, or three percentage points per annum.

10. And the great useful model, after compound interest, is the elementary math of permutations and combinations.

11. If you took our top fifteen decisions out, we’d have a pretty average record. It wasn’t hyperactivity, but a hell of a lot of patience. You stuck to your principles and when opportunities came along, you pounced on them with vigor.

12. It is remarkable how much long term advantage people like us have gotten by trying to be consistently not stupid, instead of trying to be very intelligent.

13. We recognized early on that very smart people do very dumb things, and we wanted to know why and who, so that we could avoid them.

14. Invest in a business any fool can run, because someday a fool will. If it won’t stand a little mismanagement, it’s not much of a business. We’re not looking for mismanagement, even if we can withstand it.

15. I believe in the discipline of mastering the best that other people have ever figured out. I don’t believe in just sitting down and trying to dream it all up yourself. Nobody’s that smart…

16. Creative accounting is an absolute curse to a civilization. One could argue that double-entry bookkeeping was one of history’s great advances. Using accounting for fraud and folly is a disgrace. In a democracy, it often takes a scandal to trigger reform. Enron was the most obvious example of a business culture gone wrong in a long, long time.

17. Beta and modern portfolio theory and the like – none of it makes any sense to me. We’re trying to buy businesses with sustainable competitive advantages at a low, or even a fair, price.

18. The idea of excessive diversification is madness.

19. We have three baskets for investing: yes, no, and too tough to understand.

20. If you don’t get this elementary, but mildly unnatural, mathematics of elementary probability into your repertoire, then you go through a long life like a one–legged man in an ass–kicking contest. You’re giving a huge advantage to everybody else.

21. Someone will always be getting richer faster than you. This is not a tragedy.

22. You’ll do better if you have passion for something in which you have aptitude. If Warren had gone into ballet, no one would have heard of him.

23. When any guy offers you a chance to earn lots of money without risk, don’t listen to the rest of his sentence. Follow this, and you’ll save yourself a lot of misery.

24. Everywhere there is a large commission, there is a high probability of a rip-off.

If you’re looking for more wise investment sayings, check out these investment quotes. There’s a lot we can learn from some of the world’s best investors. And there’s a lot of overlap in their logic as well.

Those quotes, along with the Charlie Munger quotes, are good to keep in mind. They can help you make better investment decisions. And to find some of the top opportunities today, check out these free investment newsletters. They’re packed with tips and tricks from investing experts.