What is Conditional Value at Risk (CVaR)?

When it comes to managing a portfolio with hundreds of millions or billions of dollars, it’s important to have a firm handle on risk. Specifically, fund managers need to calculate the Value at Risk (VaR) and the Conditional Value at Risk (CVaR) of the fund. This is a widely-used practice in the world of quantitative finance, used to calculate expected losses in the worst X percent of cases. In short: VaR and CVaR work together to define worst-case scenarios and quantify them.

Conditional Value at Risk in particular is a powerful metric that gives portfolio managers a look at the potential reality of a worst-case scenario. Also known as expected shortfall, it quantifies the amount of money a fund would lose if its performance crossed thresholds established by VaR.

Here’s a closer look at CVaR and its relationship to VaR, and how major institutions use these metrics to safeguard themselves against market volatility and variance over time. 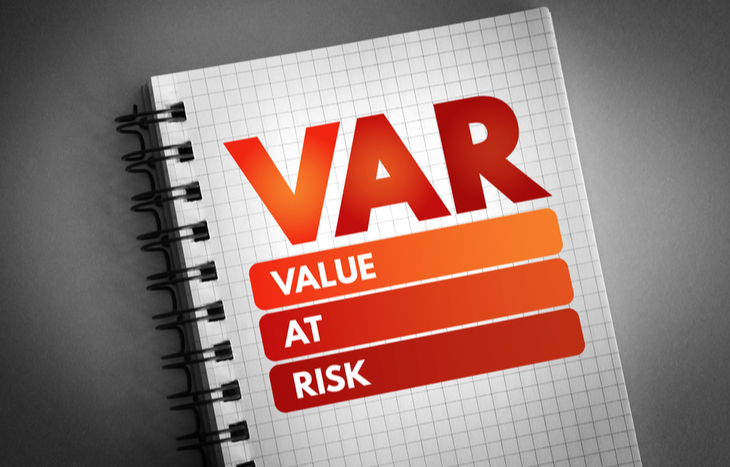 First, What is Value at Risk (VaR)?

In simplest terms, Value at Risk is a specific measure of volatility. It establishes a fund’s acceptable maximum loss in a given holding period, based on a certain confidence level. It’s calculated by looking at a time frame, establishing a confidence level and determining a loss amount. It all boils down to a single question: What is the highest level of loss you could expect to lose over a certain time period?

Every institution or fund has its own way of measuring VaR, and the figure is usually measured at either 95%, 99% or 99.9% confidence:

Jacob manages ABC Fund. He calculates the three-month VaR of the fund at 4%, with a 95% confidence. That means there’s a 5% chance that the fund will decline 4% on any given day over the next three months.

By identifying the VaR of a fund or asset, managers can better-assess potential risk and expected losses if that risk is realized.

The Limitations of VaR

While very useful, there are some limitations to VaR. Specifically, it’s best for shorter holding periods up to a year. This is because it’s largely associated with risk tied to profit and loss. Beyond a year, larger risk factors come into play and VaR can’t always account for them. That’s why, for long-term investments, Conditional Value at Risk is a more accurate and generally preferred assessment metric.

CVaR builds on the figures established by VaR, to put potential losses in real terms beyond the specified threshold (breakpoint). For instance, a fund manager might measure VaR at 2% with a 95% confidence level, which means that there’s a 5% chance to lose 2% on any day in the given period. CVaR of 2% at a 95% confidence level says that in the worst 5% of your returns, your average loss will be 2%.

Fund managers can simulate CVaR to get an average expected loss, instead of a range of potential losses spread out over a trading period. This effectively contextualizes worst-case scenario losses based on the confidence level.

The Formula for CVaR

Because CVaR uses data established by VaR, it’s important to calculate VaR first. Once a fund manager establishes VaR, they can then use that data to establish CVaR using the following formula:

Calculating CVaR provides a more conservative outlook for managing risk exposure, especially over a longer time horizon. Not only does it account for a broader spectrum of volatility, it quantifies risk in real dollars beyond anticipated worst case scenarios.

How Risk Managers Use CVaR

Both VaR and CVaR are cornerstone metrics in quantitative finance, used primarily by risk managers to create safeguards for portfolio management. CVaR in particular is a popular tool for stress testing, as it’s useful over longer time horizons. Applying CVaR measures to a portfolio can help risk managers make better decisions. Moreover, they will learn how to best-hedge against potential volatility.

Ultimately, CVaR provides a measure of true risk exposure because it transcends the VaR breakpoint. VaR is useful for setting risk thresholds at certain confidence intervals. However, CVaR goes beyond to promote a broader scope of risk management.

What Do You Have to Lose?

It’s the job of any portfolio manager to make decisions that both pursue profit and protect against risk. In working with risk managers to identify VaR and CVaR, fund managers can get a handle on volatility. Using this information can inform anything from hedging efforts to portfolio rebalancing.

While it’s impossible to predict the future, there are always ways to protect against it. Conditional Value at Risk gives funds the opportunity to set safeguards and understand their potential for loss. This can take some of the uncertainty out of forward-looking investments.