Cyclical Stocks: An Offensive Play for Any Market

Economies of all shapes and sizes go through cycles. There are expansions and contractions… peaks and valleys of economic output. And the same goes for the markets. There are macroeconomic factors that push the price of stocks up and down. But there are also more obvious ways to anticipate the movement of some companies’ share price… especially if they fall into the category of cyclical stocks. 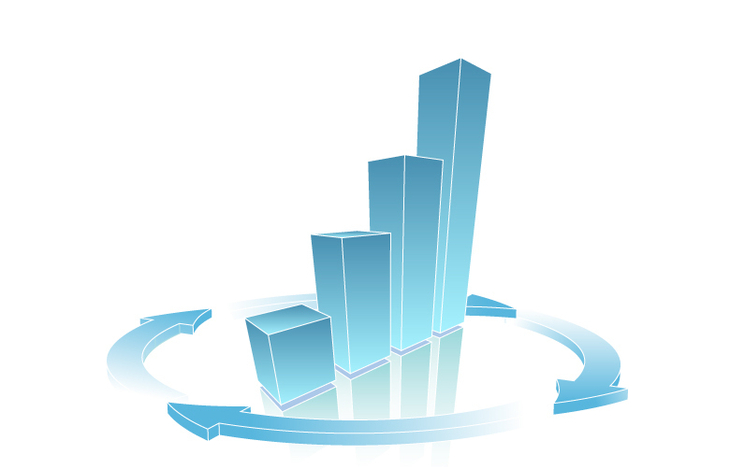 Identifying cyclical stocks and timing an investment appropriately can allow investors to maximize their profits in a relatively short time frame. But to be clear, investing in cyclical stocks is not the same thing as trying to “time the market.” That’s a completely different strategy. And one with much lower odds of being achieved.

The Futility of Timing the Market

Buying at the perfect time can and does happen – on occasion. But trying to accurately and consistently do so is a fool’s gambit. Here’s an example why…

Meet Chuck. He’s a young investor with his eyes on retiring early. At the young age of 25, he decided to try to invest in the S&P 500 on the perfect day. He crunched the numbers. He looked at the trends. And he got lucky and invested his money when the S&P 500 Index bottomed out.

In this case, Chuck got lucky. And the likelihood of his getting that lucky again isn’t very likely. In fact, the odds of Chuck picking the perfect day to invest (at the lowest price of the year) for the next 30 years are 1-to-1,240… followed by another 69 zeros. In other words, he’s got less than a one in one-duoseptuagintillion chance of picking perfectly for the next 29 years. So yeah, not likely.

There are just too many factors pushing and pulling a massive index like the S&P 500 up and down. On the other hand, cyclical stocks offer a slightly better chance to get the timing right… Or at least to come close. And that’s good enough when it comes to horseshoes, hand grenades and investing.

Now let’s look at an example of a cyclical stock that rallies and declines with larger economic trends.

A Cyclical Stock for When Times Are Good

When the economy is strong and consumers are spending money, vehicle sales go up. Automobile stocks are a classic cyclical stock. Because when discretionary funds abound, people buy a lot more Hondas and Toyotas.

On the other hand, when times are tight and the country is tightening its collective belt, people tend to hold off on making big-ticket purchases. So naturally, vehicles sales go down. And the stock of companies like Honda (NYSE: HMC) and Toyota (NYSE: TM) tend to follow accordingly.

This is why when unemployment numbers were at record lows, the price of Toyota’s stock was at a record high. And when the economy took a hit, so too did Toyota’s stock.

By paying attention to macroeconomic trends, you can guess within a few degrees of certainty when a cyclical stock is going to take a hit. And that’s when investors want to start investing. Because when the greater economy begins to rebound, so can Toyota’s stock price. And then it’s just a matter of holding it until things start looking like they could go south again. It’s one of the more clear-cut ways to generate the highest possible return in a short time frame.

The Other Cyclical Stock

Not all stocks march in lockstep with the markets or even the economy as a whole. Some have a beat all their own. The videogame industry is a perfect example of this.

Take a look at this chart showing the average monthly gains of Electronic Arts (Nasdaq: EA) over a five-year period… 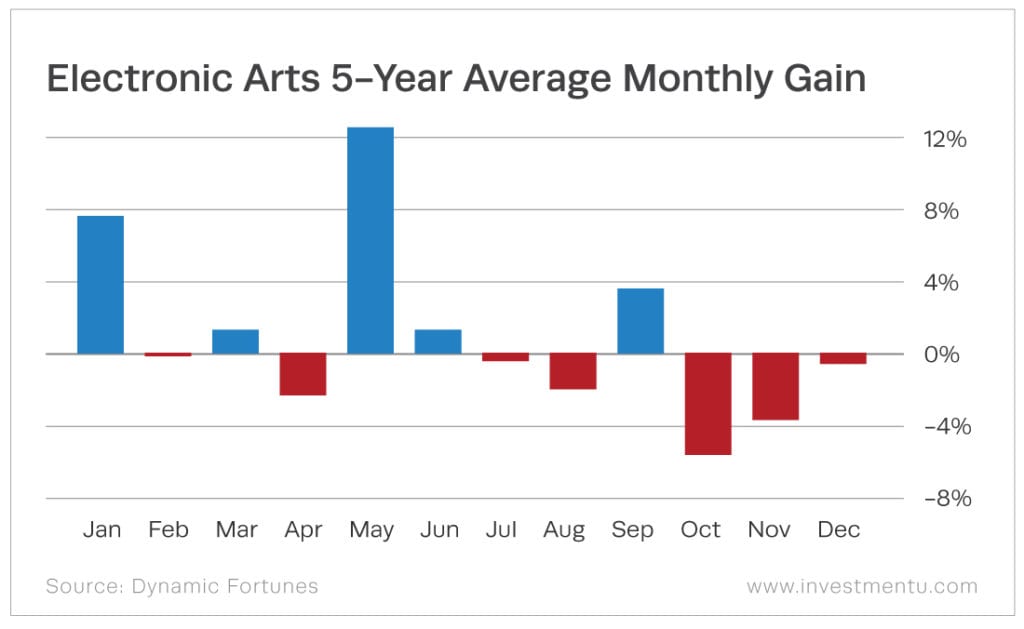 There are some sizable swings in share price at very specific times of the year. But it’s safe to say that if you bought in October or November, you’d probably be buying it at a discount. And if you held it until after holiday sales were recorded, you’d be able to turn a nifty profit in a relatively short period of time.

In fact, you could make a promising play on shares of Electronic Arts a couple of times a year just by following the pattern of this cyclical stock.

Now granted, this isn’t a promise of things to come. Shares of Electronic Arts can still be impacted by outside forces or unforeseen actions.

Other examples of a cyclical stock with a noticeable pattern are breweries. Sure, some people drink beer year-round. But as a nation, beer season starts on Memorial Day. Those who invest in the likes of Anheuser Busch InBev (NYSE: BUD) or Boston Beer Company (NYSE: SAM) in the early days of spring are likely to see an impressive spike in their portfolio by midsummer. From there, it’s just a matter of timing the exit before the share price goes into hibernation.

The Bottom Line of Cyclical Stocks

Cyclical stocks are often referred to as “offensive stocks.” That’s because they follow the ups and downs of larger trends in the market. Then there are “defensive stocks.” These tend to be investments in consumer staples – purchases more insulated from economic trends. For instance, folks don’t stop buying toothpaste because the economy turns sour.

But some cyclical stocks – like beer sales – are stabler even amid economic downturns. The alcohol and beverage industry is largely considered to be recession-proof. So with some cyclical stocks, it’s possible to be offensive and defensive at the same time.

This is just one tool that you can add to your investment arsenal. There are plenty of other ways to figure out how to pick a stock. In fact, there are scores of investment opportunities that don’t involve the stock market at all.