Depreciation expense can be a big portion of a company’s total expense. And since expenses decrease income, it affects the overall value of a company. Understanding what it is and the methods can help you determine if a company is as good in real life as it is on paper.  That’s why I’ve put together this guide with depreciation expense methods, formulas and examples.

What is Depreciation Expense?

Depreciation is the decrease of a tangible asset’s value. It occurs over the span of its estimated useful life. This lets a company gradually write off the asset. To record depreciation, a company will debit an account called depreciation expense. This decreases the company’s income.

But depreciation doesn’t only affect companies. It affects everyone, including you. For example, you might have heard the advice to never buy a brand-new car. That’s because the second you drive off the lot, its value can drop 10% or more. And that doesn’t include the additional 10-20% you lose in the first year. Though, unlike companies, you don’t have to record depreciation expense.

There are a few different methods to calculate depreciation expense. Let’s take a look… 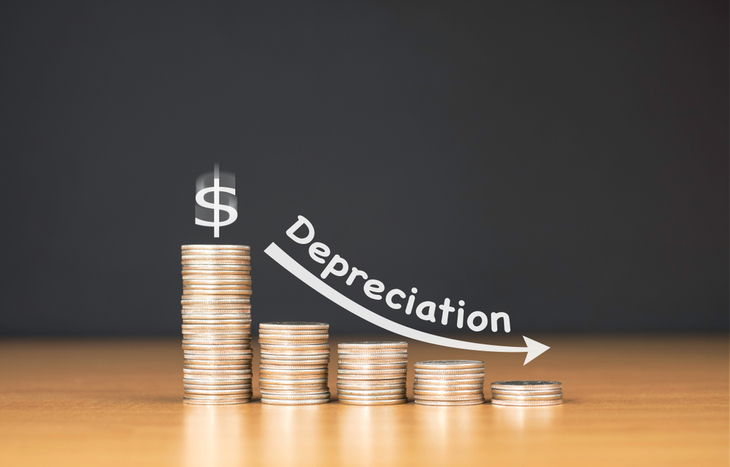 What are the Depreciation Methods?

There are four common methods to calculate depreciation:

Each method is selected to fit the asset’s nature. Below you can find a description of each method and the types of assets it’s typically used for.

Straight-line depreciation is common and the easiest to calculate. In the method, the asset is depreciated by the same amount every year of its useful life.

The annual depreciation expense is $2 million.

The straight-line method can be applied to most assets. If there isn’t a specific trend to the asset’s use, straight-line depreciation is applied.

This method is used when the asset depreciates more quickly in the earlier years, like your car. It has a 2x factor to accelerate depreciation. In straight-line, the factor is 1. But that doesn’t mean you multiply the straight-line by two. The formula is as followed:

Let’s use a car for an example. You buy a car for $50,000. It has a useful life of 5 years. In the first year, the depreciation would be calculated like this:

However, note that assets typically have a salvage value. If your car’s salvage value is $3,500, then don’t depreciate the full $2,272 in the fifth year. It depreciates your car past its value. Instead, depreciate $2,180 to bring the value to $3,500.

Sum-of-years digits (SYD) applies a percentage to determine the depreciation value. Like double-declining, this is an accelerated method. To calculate SYD, first determine the asset’s useful life. Then, find the sum of the digits leading to that number. This will be your base.

Now, take the number of years left in the useful life and divide it by the base. So, if it’s the first year, there are five years left the machine is usable. This will give you a percentage.

For the second year, there are four years remaining in the useful life.

This will continue until the end of the asset’s useful life. By then, the percentages should total 100% for a total depreciation of $90,000.

Units of production is a method of depreciation based on asset usage. It’s mostly used by manufacturers because their machinery’s usage varies with customer demands. Depreciating by units produced better matches expenses and revenues. It also is a more accurate representation of wear on the machinery or equipment.

Let’s take the example above. You buy a machine for $100,000 with a salvage value of $10,000. While you should know the useful life, it’s not needed to determine the depreciation expense. Instead, you estimate how many units the machine will produce over the span of its useful life. Let’s say it will produce 45,000 units over five years.

Then, you determine the depreciation cost per unit.

With a great knowledge of depreciation expense, you’re better prepared for investment decisions. Check out our Investment Opportunities page to get started. And don’t forget to sign up for our free e-letter below! It has great investment tips and advice.