Flying Car Stocks That Are Cleared For Takeoff

In 1989, Marty McFly hopped in his flying DeLorean so he could travel to the future and fix his family. In the movie, Marty travels to the year 2015. Well, it’s now 2022 and you still can’t buy a flying car at the local car lot. However, that doesn’t mean that flying car stocks aren’t being developed.

Right now, there are several companies that are working to make flying cars a reality. In addition to being an awesome tech development, flying cars will also solve a major societal issue. That issue is the intense gridlock that is starting to stifle many metropolitan areas. In particular, Boston commuters spent almost 6 full days in traffic in 2019. Other cities with major congestion are Chicago, Philadelphia and Los Angeles. Any company that offers commuters an alternative to sitting in traffic will surely have lots of eager customers.

Since hating traffic is universal, the flying car market has the potential to be huge. Due to this, investors are eagerly looking for potential flying car stocks to buy. However, since the industry doesn’t technically exist yet, it’s a little tough to find any publicly-traded flying car stocks. To help, I’ve found a few companies that are leading the way.

Keep in mind that most of these companies are technically “electric vertical takeoff and landing (eVTOL) aircraft. Instead of a car with wings, think of a slightly smaller personalized helicopter.

With that said, let’s look at a few of the best flying car stocks to buy. 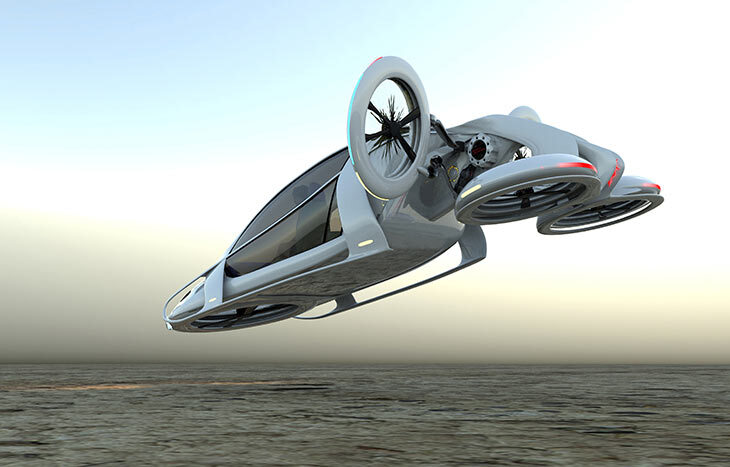 As Joby Aviation recently went public, this might be the first that you’re hearing about this flying car stock. However, that doesn’t mean its team hasn’t been working hard for years. Joby was launched in 2009 and released its first prototype in 2015. More recently, it purchased Uber’s flying car division. Joby expects to start commercial operations as soon as 2024.

Joby’s helicopter has a vertical takeoff, can seat 4 passengers (plus the pilot) and reaches a top speed of 200 mph. This makes it perfect for congested metropolitan areas like Los Angeles. Joby’s helicopters would be able to turn an hour-long drive into a 15-minute flight. The phrase that Joby uses to describe its business is “electric aerial ridesharing.”

In the second half of 2021, Joby went public through a merger with SPAC Reinvent Technology Partnerships. It has only released data from FY 2021 where it reported a net loss of $180 million. However, this loss is expected since commercial flights aren’t starting until 2024.

Joby’s stock has remained steady at approximately $5/share in the recent months.

Archer Aviation is another flying car stock that recently went public via SPAC. In late 2021, it merged with Atlas Crest Investment Corporation. According to Archer Aviation’s website, it is “powering the future of urban air mobility.” Archer offers a similar style of flying car to Joby (eVTOL).

Notably, Archer has secured a partnership with United Airlines. This is actually a significant competitive advantage. United will be there over the coming years to offer capital and expertise. Additionally, Untied could potentially become a very large customer for Archer.

Archer plans to unveil the first generation of its aircraft in 2023. It is considering Los Angeles and Miami as its flagship cities. This flying car company posted a net loss of around $72 million in Q2 2022.

Archer’s stock has dropped by about 50% year-to-date. However, it’s so early on for this flying car stock that I wouldn’t worry much about its movements.

The final flying car stock is in China. EHang offers eclectic passenger-grade autonomous aerial vehicles. Out of all three of these companies, Ehang has the most public financial information available.

In 2021, EHang posted $57 million in annual revenue. This represented a 68% decrease from 2020. However, it also reported a total net loss of $314 million in 2021. Just like with the previous flying stocks, I wouldn’t focus too much on these early initial losses.

Ehang’s stock is down 64% over the past year.

Those are the three major flying car stocks that appear to be closest to bringing a product to market. However, there are a few other flying car companies worth mentioning.

Just like with self-driving cars, many companies are quick to jump on the bandwagon. Every company wants to act as if it’s on the cutting edge of the industry. However, many of these flying car stocks are vague on how close they are on delivering on its promises.

For me, it’s a little tough to get excited before actual prototypes are delivered. With that said, here are a few other companies that could potentially become flying car stocks. These companies have mainly just released very initial concepts of what its car would look like:

I hope that you’ve found this article valuable when it comes to learning a few potential flying car stocks to buy. As usual, all investment decisions should be based on your own due diligence and risk tolerance.