In 2021, GameStop was by far the most talked-about stock of the year. Earlier in the year (late January), this video game rental company was the subject of a short squeeze. This short squeeze dominated the news cycle and was accompanied by several lawsuits, most of which are still ongoing. 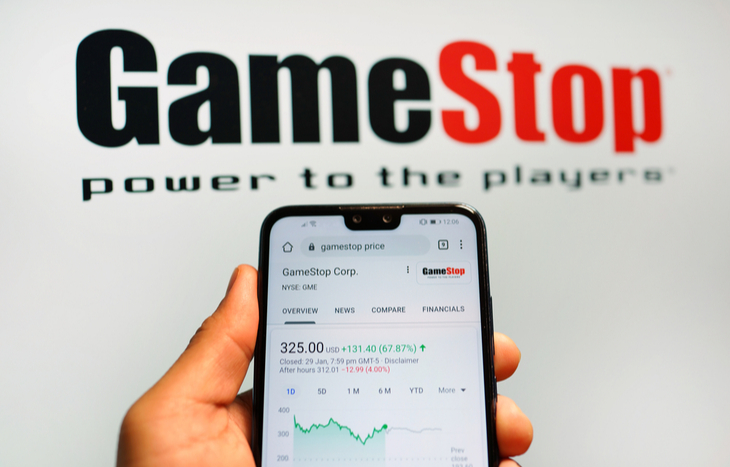 Note: GameStop’s price has still been very volatile in the short term. Use caution if you’re considering investing.

During the height of the squeeze, the price of GameStop’s stock peaked at around $350 per share. However, it is still up over 1,500% on the year and sits at around $170 per share.

In the short term, the price of GameStop’s stock has still been very volatile. This is mainly still due to traders playing tug of war with the stock. By this, I mean that traders are still buying, selling and holding the stock for reasons unrelated to GameStop’s business. There’s no way to tell how long this will continue.

So what does this mean for GameStop’s stock moving forward?

So far we’ve mainly just discussed the short squeeze. However, a big reason why Reddit traders rallied behind GameStop at all is because they still believe in the company.

It’s no secret that with the rise of eCommerce, GameStop’s brick-and-mortar strategy has been struggling. From FY 2011-2019, sales declined from $9.5 billion to $6.4 billion. Net income also fell from $339 million to a loss of $470 million. What’s even worse is that the size of the global gaming market has actually been growing exponentially over the same period.

This is part of the reason why the stock had fallen about 90% since 2015. However, there is still hope for the company to pivot and turn things around.

One big advocate for GameStop is Ryan Cohen, the former CEO of the online pet supplier Chewy.com. This successful entrepreneur currently owns about 10% worth of GameStop. Cohen believes that there is a great opportunity for GameStop to become the Amazon of Video Games (instead of the Blockbuster of Movies). He believes that GameStop is desperately clinging to its brick-and-mortar strategy. Instead, it needs to embrace a digital mindset. He thinks that GameStop should build out its eCommerce platform and incorporate new technology into its business. Due to GameStop’s strong brand and customer base, this could be an extremely successful strategy.

GameStop’s most recent earnings report was in July 2021. These numbers were mostly improved when compared to last year. However, it’s important to remember that last July was the Summer of COVID-19. COVID-19 most likely crushed GameStop’s business last year, which is resulting in overly inflated numbers this year. This is a little similar to jogging your first mile at a half pace and crushing your mile time when you run at a normal pace in lap #2. Of course, GameStop did not do this intentionally and it was the result of COVID-19 restrictions.

So what does this mean for GameStop investors?

In the short term, I would expect the volatility in GameStop’s stock price to continue. This volatility will likely continue until the investigations are concluded. This process could take months to years.

Other than that, GameStop is a company that’s sailing into uncharted waters. If it fails to innovate then there’s a good chance it’ll slip into bankruptcy (just like Blockbuster did). However, if it is able to reinvent itself then GameStop’s stock could rally over the coming years.

Here are a few of the biggest innovations investors will look for:

Keep in mind that with this GameStop stock forecast, it may still fall in the short term even if these announcements are made. This is because many investors still believe that the stock is overvalued by about 70%.

As usual, all investment decisions should be based on your own due diligence and risk tolerance. When it comes to GameStop, investors seem to be particularly divided.

Some investors are long-term believers in GameStop’s business. If this is the case, then it might be wise to wait for the short-term drama to end.

However, others might think that GameStop is still being squeezed then. If this is you, then the short-term volatility might actually be a reason to buy.

Or, you might think that GameStop is doomed either way. If this is the case, then feel free to stay far away.

I hope that you’ve found this Game stock forecast valuable in deciding whether or not to invest. As usual, all investment decisions should be based on your own due diligence and risk tolerance.

If you’re looking for even better investing opportunities, sign up for Trade of the Day. It’s a free e-letter that’s packed with tips and tricks from trading experts. Whether you’re a beginner or already an advanced trader, there’s something for everyone.