Green hydrogen stocks can provide some great investment opportunities. Green hydrogen is one of the latest renewable energy technologies. And some think it could be the next great thing for battling carbon emissions.

But before we get into which stocks to pick, let’s talk about what green hydrogen is.

Green Hydrogen: What Is It? 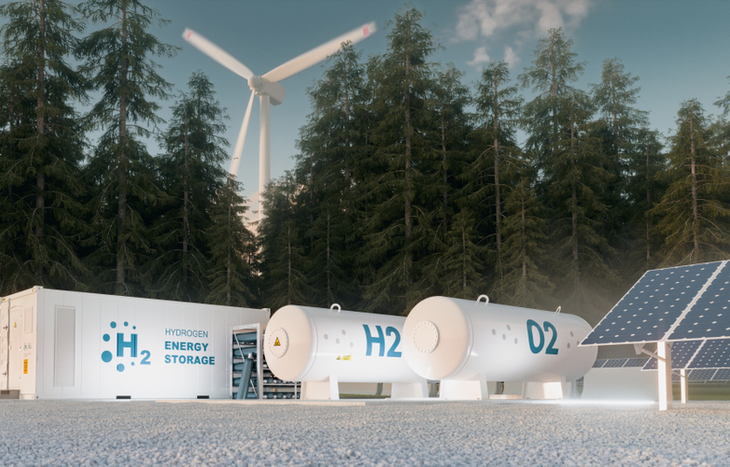 David Fessler is the Engineering Strategist for Profit Trends. In an article he wrote titled “Why Green Hydrogen Is the Holy Grail of Renewable Energy,” Fessler broke down hydrogen-making processes into four categories.

Gray hydrogen is made via steam methane reformation. It’s a byproduct of the fossil fuel refining process. About 71% of our hydrogen today is “gray.”

Brown hydrogen is made from coal gasification. People used this method for decades. However, it creates other greenhouse gases as byproducts.

Blue hydrogen uses today’s production but adds carbon capture and storage. This method isn’t commercialized or up to scale for widespread use.

Green hydrogen is produced by electrolysis. People use renewable energy to separate water into its two basic elements: oxygen and hydrogen.

And that brings us to…

Second, it can be stored until it’s needed at a later date or sold. This makes it a good resource for utility operators of intermittent renewable energy sources, such as wind or solar.

And lastly, Fessler comments in his piece…

In addition to hydrogen’s uses mentioned above, green hydrogen opens up a wide range of applications too. Steelmaking and cementmaking are two industries that are very difficult to decarbonize. Each has a different production process. But both share one big challenge: needing large amounts of continuous, high-temperature heat. And we can’t just stop making either material. Cement and steel are essential building blocks for today’s modern construction. But each of them is responsible for about 7% of energy-related GHGs. That’s because their heat sources are fueled by natural gas. Switching to green hydrogen is a key part of decarbonizing them.

There are a few things that still need to be worked out, however. Hydrogen has a lower volumetric density than natural gas. This will create change in existing natural gas pipelines.

Additionally, the cost to make green hydrogen needs to go down before production volume can go up. But according to Fessler, experts believe the cost will be cut in third by 2030.

With the Biden administration in office, many are excited for renewable energy and infrastructure stocks. So, with all of that in mind, here are some of the best green hydrogen stocks to invest in right now.

Based in Ireland, Linde manufactures and sells atmospheric gases. This includes oxygen, nitrogen, hydrogen, helium and other rare and specialty gasses. Hydrogen is one of its main focuses. More than 160 hydrogen refueling stations around the world use Linde’s technology. The company hopes to start the first hydrogen refueling station for passenger trains in Germany by July.

Air Products & Chemicals (APD) is a U.S. company based in Pennsylvania. However, it operates globally with more than 19,000 employees in more than 50 countries. It sells gases and chemicals for industrial use, which could be beneficial to investors if Biden’s infrastructure plan is approved.

APD’s first hydrogen fueling station started in 1993, making it one of the first companies to adopt the practice. Additionally, APD has had a relationship with NASA for 50 years. Its liquid hydrogen is used for every space shuttle launched as well as the Mercury and Apollo missions.

Another U.S. company, this green hydrogen stock is a well-known name. The Connecticut-based company designs and manufactures fuel cell power plants. FuelCell’s SureSource plant creates more hydrogen than it needs to power production. This leaves a surplus for industrial or transportation uses.

The U.S. Department of Energy chose FuelCell to receive $8 million in funding last year. This money was for the design and building of a SureSource electrolysis platform to produce hydrogen. Additionally, the company announced a big milestone: It’s delivered 12 million megawatt hours of environmentally responsible energy.

Founded in 1979, Ballard is a Canadian company. It develops and manufactures hydrogen fuel cells for automobiles and engineering services. This green hydrogen stock is one of the leading providers of clean energy fuel cell solutions.

At the end of last year, Van Hool, a Belgian coachbuilder and manufacturer, purchased 10 fuel cell modules for its buses. Ballard also is in partnership with German auto manufacturer Audi. The focus is automotive fuel cells. The partnership is expected to run until at least 2022.

Bloom Energy is a California manufacturer. Last year, it announced its plan for the hydrogen fuel cell commercial market. Analysts believe this green hydrogen stock can be a good bet in the fuel cell industry because it’s an established company with a history of growth.

Bloom will release 2021 first quarter results on May 5. The company expects to hit $1 billion in revenue for 2021, at the high end. Bloom will also provide an update after recently joining Hydrogen Forward to advance hydrogen development in the U.S.

Did you find this list of green hydrogen stocks helpful? If so, sign up for the free Profit Trends e-letter! It’s full of useful tips and research from investing experts. And if green energy interests you, check out these 5 Green Energy Penny Stocks to Watch in 2021.