The Infrastructure Investment and Jobs Act was passed last year as part of the President’s Build Back Better plan. Accordingly, the new bill authorizes funds to stimulate new building and restore America.

The infamous “infrastructure week” finally holds true to its promise to start building. In November, HR 3684, also known as the Infrastructure Investment and Jobs Act, was signed into law with both party’s support.

Above all, the bill intends to create jobs while stimulating the U.S. economy for years. At the same time, the jobs act may have bigger effects on the stock market and your portfolio. Learn more about the Infrastructure Investment and Jobs Act and how it could affect your portfolio below. 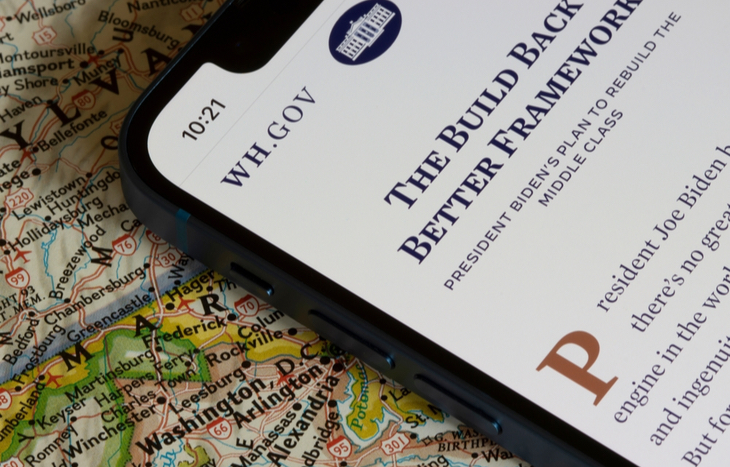 What Is the Infrastructure Investment and Jobs Act?

The Infrastructure Investment and Jobs Act (IIJA) is a $1.2 trillion bill passed into law in 2021. The administration calls it as a “once-in-a-generation investment.” And the largest of its kind in U.S. history.

With this in mind, the jobs act sets aside funds to advance several issues pressing the economy. For example, the bill (with Build Back Better) expects to add 1.5 million jobs every year until at least 2032.

The historic investment in America focuses on improving several aspects of the economy holding the nation back. By providing everyone with an opportunity, the country can advance as a whole.

Adam Smith, the ‘father of economics,’ famously said, “A nation is not made wealthy by the childish accumulation of shiny metals, but it enriched by the economic prosperity of its people.” While this may be true, with soaring inflation and an already huge deficit, will the bill do as it intends?

Where Are the Funds Going?

Below you will find a quick breakdown of the Infrastructure Investment and Jobs Act and where the funds are going.

As you can see, the bill aims to close the widening income gap in America by providing equal access opportunities. Furthermore, the jobs act intends to ease supply chain issues, a key driver of inflation.

Will the Infrastructure Investment and Jobs Act Affect the Stock Market?

With an influx of money, several industries will likely see a boost in demand from the jobs act. For one thing, the infrastructure investment and jobs act injects $1.2 trillion into the economy over the next five years. With this in mind, the investment is the largest spending on rebuilding in decades.

Chief economist at Moody’s Analytics, Mark Zandi, says, “increasing infrastructure investment has significant macroeconomic benefits.” Citing positive effects on GDP and employment in the long run. If the bill helps stimulate growth, you can expect a few sectors and specific industries to benefit.

Another key thing to consider is long-term trends. The IIJA lays the groundwork for a cleaner, more resilient future.

How Will It Be Paid For?

A major concern people have with the Infrastructure Investment and Jobs Act is the amount of money. For one thing, over $4.6 trillion has been spent so far in response to the pandemic. So, it’s reasonable to be skeptical of another massive spending bill.

But the administration has several ideas to pay for the spending. Here are a few estimates…

Furthermore, the broader agenda plans to raise taxes on corporations and high earners. As a result, the lower and middle class should benefit.

The Infrastructure Investment and Jobs Act is another step in President Biden’s Build Back Better plan. The new bill calls for a slew of new funds and programs to boost the economy while setting America on a path for sustained growth.

Through these new investments, several industries will see an influx of cash. For example, U.S. materials companies producing steel, iron, and other construction parts will likely see higher demand. On top of this, the bill advances issues like clean drinking water and internet access to provide equal opportunities to rural areas.

Will the new jobs act do as it intends and stimulate the economy? Or will it add further fuel to the fire known as inflation? So far, economists expect mild results, slight to no growth and little debt added.