Why a Bad Valuation Can Ruin a Great Company

Shopify (NYSE: SHOP) is one of the hottest stocks on the market.

Just check out this stock chart… 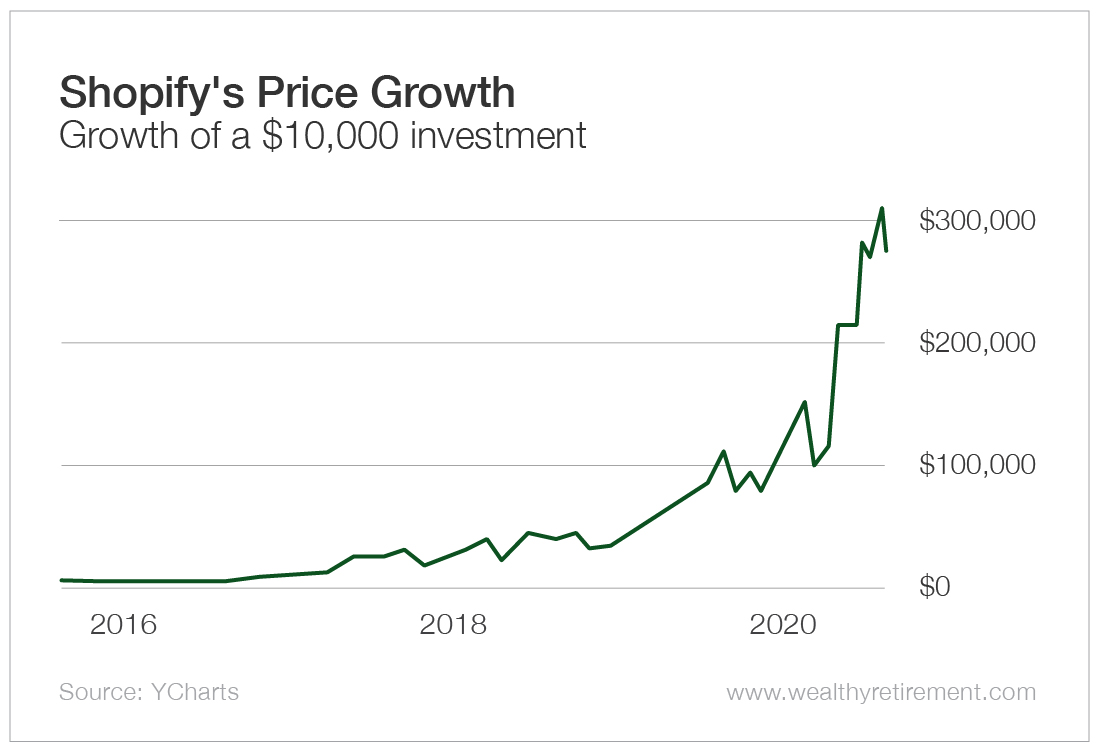 A $10,000 investment in Shopify five years ago is now worth more than $280,000! And the vast majority of that increase came this year.

No question… I wish that I had bought shares of this company a few years ago. But would I buy shares today?

Even when compared with some of the most expensive stocks in the world, Shopify is outrageously overpriced.

Founded more than 10 years ago when entrepreneur Tobias Lütke wanted to sell snowboards, Shopify is a great company… but at today’s valuation, it is a bad investment.

Shopify’s e-commerce platform enables merchants of nearly any size to start their own businesses and make sales easily.

Comparing Shopify’s Valuation With Those of the FAANGs

These Big Tech businesses have driven the S&P 500 higher for the past five years. They are dominant businesses that deserve to be richly valued.

The chart below compares Shopify with the FAANG companies on a price-to-sales basis. 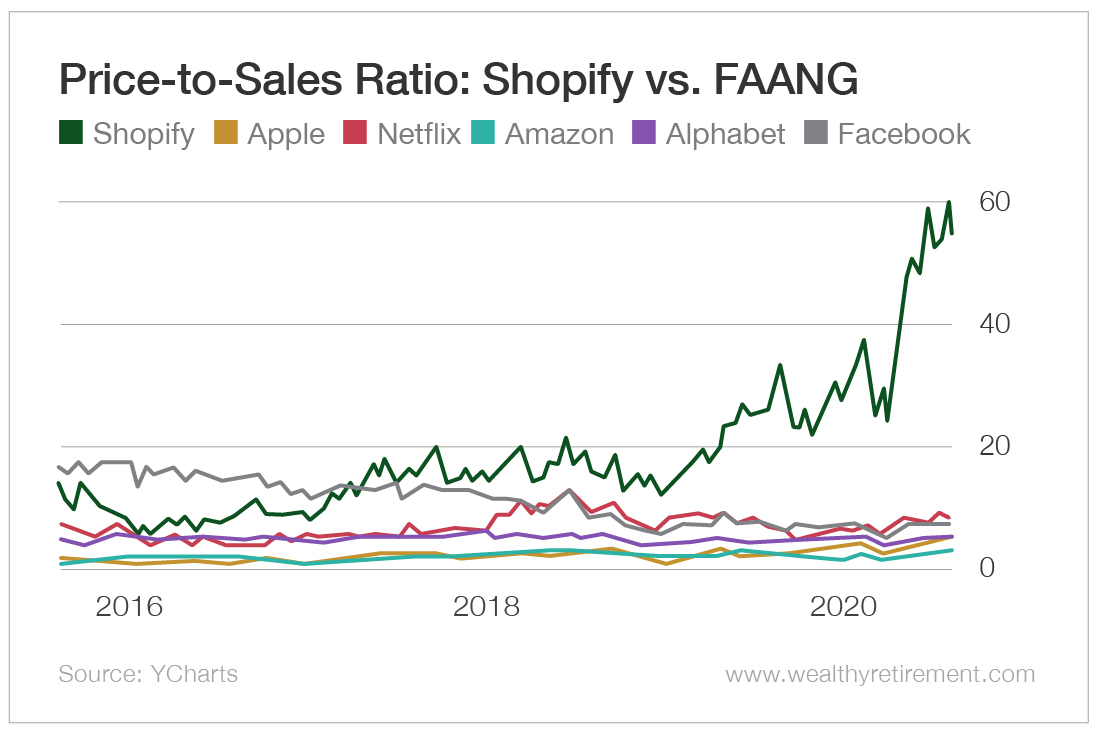 Can you spot the valuation outlier?

While the world-class FAANG companies are all valued at under 10 times their sales, Shopify is valued at 55 times its sales.

That means Shopify is valued…

But how much cash flow a business generates is even more important than its revenue.

So for an even more accurate picture, we can look to Shopify’s EBITDA (earnings before interest, taxes, depreciation and amortization). 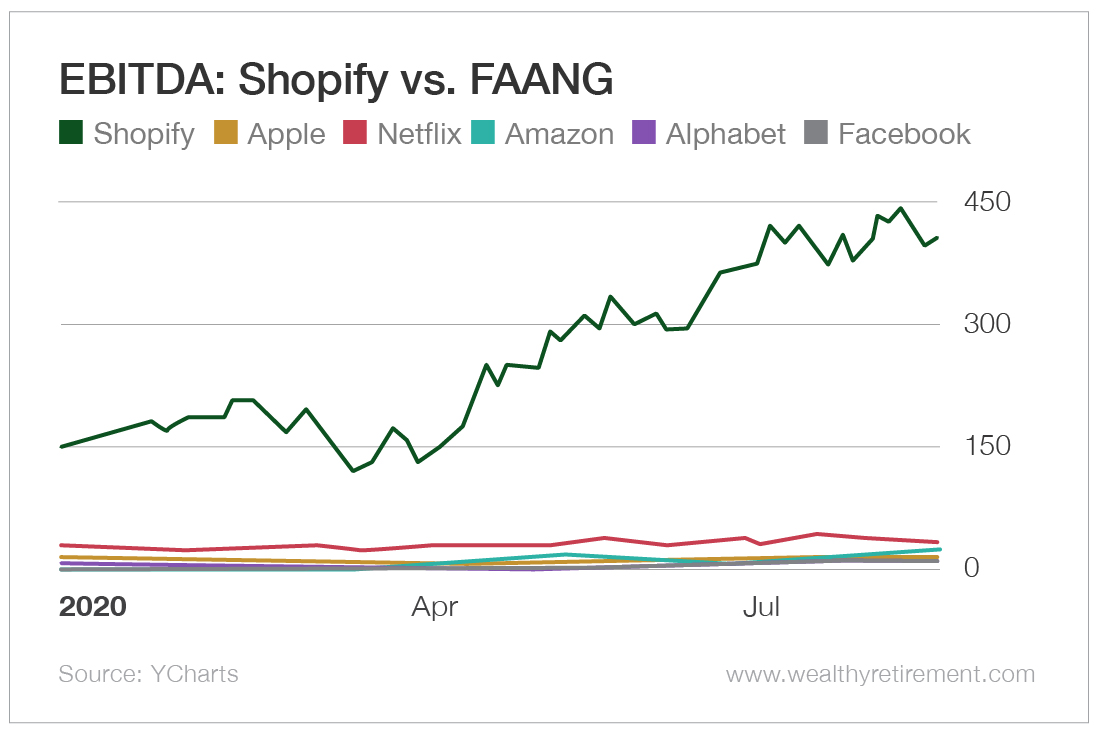 On this scale, Shopify is valued nearly 10 times higher than Netflix, the most richly valued FAANG stock.

Shopify is truly trading at a nosebleed valuation, and it is hard for such a valuation to go higher. But it sure can go a lot lower…

For Hints to Shopify’s Future, Look to the Past

I know what you are probably thinking…

Shopify is a younger company than the FAANGs – so it has more growth in front of it. Perhaps that would merit a premium valuation?

To some extent, I agree. But there’s something else you should consider…

The following chart tracks the valuation of all the FAANG companies back to 1996.

At no point have any of these great companies been valued at anywhere close to the 55 times revenue that Shopify trades at today. 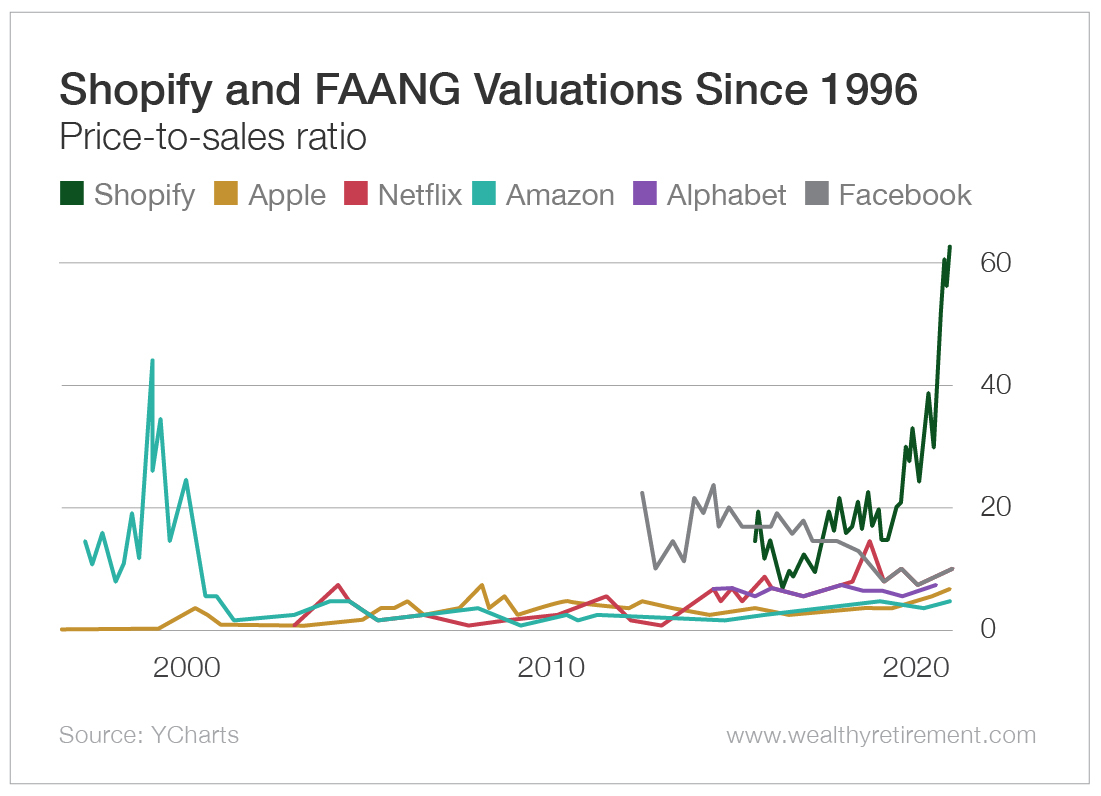 The closest that any of these companies came to matching Shopify’s valuation was Amazon in 1999 at the very peak of the technology bubble.

Like all bubbles, the tech bubble in 1999 popped and lost investors boatloads of money.

I fear the same thing is coming for Shopify. The only questions are…

Shopify is a great company – but its bad valuation makes it a bad investment.