The longest bull market in U.S. history has come to an end. Stock buybacks have helped fuel the stock market but with this recession, companies are tightening their purse strings. Airlines, banks and other companies have already announced cutting back. President Trump has also put downward pressure on repurchases…

I am fine with restricting buybacks. In fact, I would demand that there be no stock buybacks. I don’t want them taking hundreds of millions of dollars and buying back their stock.

Buybacks get a lot of negative press but they aren’t inherently bad. Like all tools, it depends on how you use them. To improve our understanding, we’ll dig into the logic behind the Trump’s quote and shed light on both the good and the bad of stock buybacks. But first, let’s look at the history books and recent announcements. With this data, we can get a better picture of what to expect in 2020…

With history as a guide, we know that a recession can create a big drop in repurchases. The stock buyback chart below shows data from 1999 through 2019… 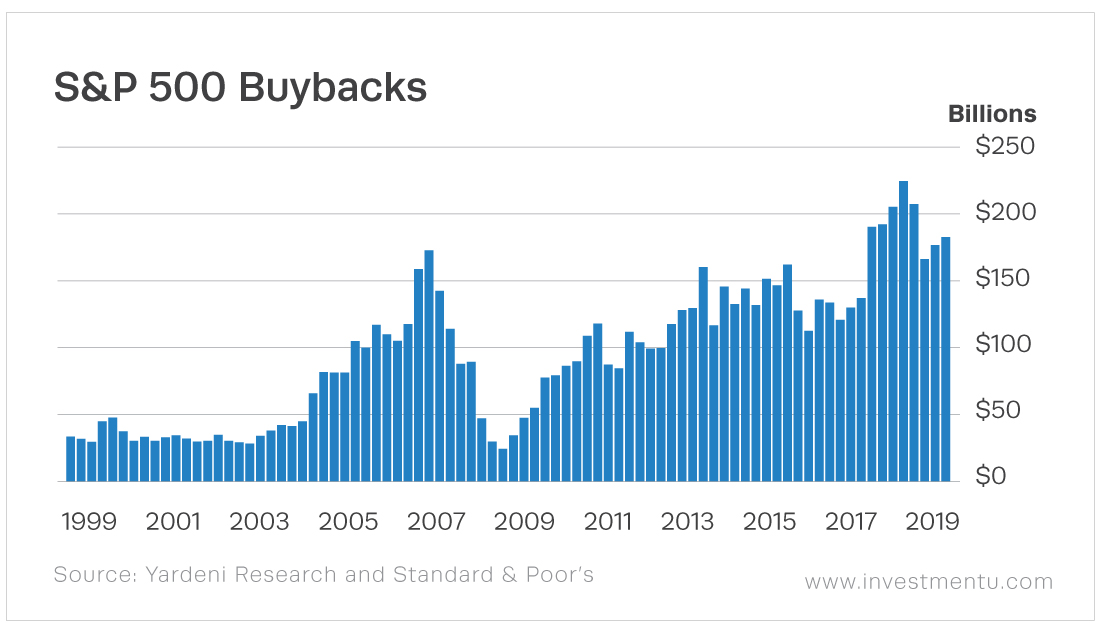 For more detailed information, you can check out this Yardeni Research report.

Depending on the length and severity of the current recession, we might see a similar drop. And unfortunately, I don’t have a crystal ball. This history is one of the best guides we have. And on top of these past trends, there’s some other useful data coming in the door. Some companies have already announced that they’re going to stop their buybacks.

Both airline and bank stock buybacks are dropping in 2020…

Airlines have seen a steep drop in business. Their total sales in 2020 will be much lower than past years. Their income and cash flow will drop as well. This is the reason airline stock buybacks are going to drop in 2020. Some airline companies might not even make it through this recession.

On the other hand, banks will see an uptick in loan defaults and lower sales… but overall, the global shutdowns shouldn’t impact them as heavily. Still, banks come under heavy scrutiny from the public and government. So, any bailouts will likely come with strings attached.

In preparation, major banks have already announced they’re stopping stock repurchases. Using bailout money to directly – or indirectly – reward shareholders is frowned upon. Although in times like these, buybacks make more sense for financially healthy companies…

Are Stock Buybacks Good or Bad?

As mentioned, stock buybacks are just one of many financial tools. When used in a good way, they reward shareholders by buying shares back when they trade at a discount. This lowers the total number of shares outstanding and increases the remaining shareholders’ ownership.

Many buybacks are also focused on offsetting stock compensation. Some companies pay employee’s with new stock in their businesses. So buying back some shares can prevent dilution.

Overall, stock buybacks aren’t bad. Although, many companies use them unwisely. One reason that stock buybacks are bad is misaligned incentive structures. Some executives are rewarded for short-term, per share metrics. For example, increasing earnings per share (EPS).

To increase EPS, a CEO could push for more buybacks and that would lift EPS. With this incentive structure, we’ve seen many bad repurchase plans. Buying back shares at lofty valuations isn’t wise and some companies have even leveraged up to do so.

Although, this problem with buybacks has a simple solution. The board of directors can set incentives tied to long-term performance with long vesting periods and staggered exits.

There’s no doubt that S&P 500 buybacks will drop in 2020. Maybe we’ll see a similar decline to the last recession. And already, we’ve seen many companies starting to cut back.

Although, like most recessions, many companies will emerge stronger than before. If you’re able to invest for the long-term, this is a better buying opportunity than a few months ago. Many of the companies that have cut their buybacks will revive them once again in the next few years.

For more market and investing insight, you can sign up for our free e-letter below. It’s packed with investing ideas from market experts. Also, if you found this article useful, feel free to share it with friends and family.

On top of that, if you’re looking for stocks that do well during a recession, check out our Top 20 Consumer Staple Stocks. They all have a good history of paying dividends.