While the 1929 stock market crash did not directly cause the Great Depression, it was the beginning of a downward spiral for the United States economy. Capitalism revolves around an economic cycle of expansion and contraction. This means that the stock market can increase in value for a while, but a decline will always occur at some point. 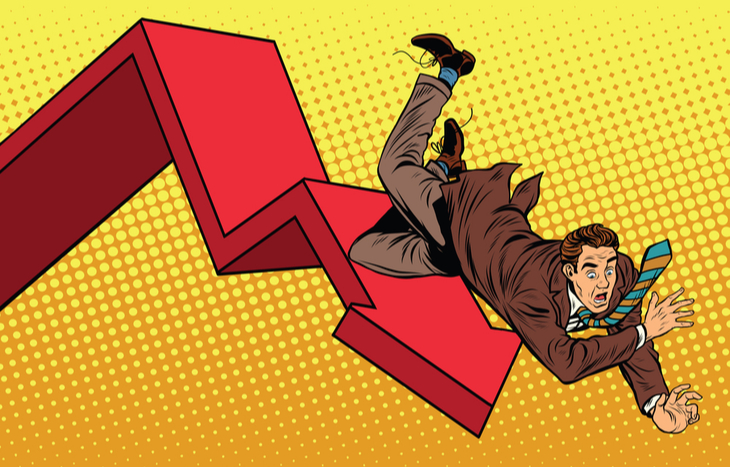 What Is a Stock Market Crash?

A stock market crash is when stock prices drastically decline in a short amount of time. When this happens, investors lose a huge amount of wealth on paper. Unfortunately, a stock market crash can lead to panic selling. Once investors realize that the market is crashing, they may sell stocks based on fear instead of logic.

Stock market crashes are often caused by economic bubbles, speculation and external economic events. For example, the dotcom bubble was driven by a bull market and speculation around tech stocks during the 1990s. When cheap capital sources dried up, panic selling caused the bubble to pop.

What Causes a Stock Market to Crash?

Stock markets crash for many reasons, but there are a few common things that occur before a crash. Normally, stock prices rise during a bull market for an extended period of time. Investors begin to feel extremely optimistic about the marketplace. During the dotcom bubble, former Federal Reserve chairman Alan Greenspan famously noted that the marketplace had a sense of irrational exuberance.

In this type of situation, the market develops price-to-earnings ratios that are far higher than the stock’s long-term averages. Some market participants use leverage pushing prices even higher. Eventually, a stock market crash occurs. While there is no set definition of a stock market crash, many analysts agree that a crash is when a stock market index drops by 10 percent or more in just a few days.

While the 1929 crash is the most famous one, crashes have occurred at regular intervals since stock markets were first created. For example, from 1634 to 1637, the Dutch Republic underwent a bubble known as Tulip Mania. During Tulip Mania, tulip bulbs increased in value so much that they sold for more than 10 times the yearly income of a skilled artisan. Some tulips even sold for 10,000 guilders, which was the value of a luxury mansion on one of Amsterdam’s canals.

During 1907 and 1908, stock prices declined by almost 50 percent. Because the Knickerbocker Trust Company manipulated copper stocks, shares of United Cooper crashed in October. This led to a panic and bank runs. J.P. Morgan eventually stepped in to stop more bank runs from happening. Because of this crash, the United States decided to create the Federal Reserve in 1913 so that the government could steady the markets instead of needing the help of private individuals like J.P. Morgan.

During the 1920s, the economy grew significantly. Investors kept investing in the stock market, but many stocks were delivering high returns because of leverage and margin debt. During the summer of 1929, investors could see that the economy was contracting. This led to investor anxiety and the Wall Street Crash of 1929.

On Black Monday in 1929, the Dow Jones dropped by 12.8 percent. A flood of investors tried to call and sell their shares, but the phone lines quickly became clogged. Unfortunately, this inability to place calls led to more panic. On the next day, the exchange was flooded with sell orders because of margin calls. In a single week, the Dow Jones fell by 40 percent. By the time the market leveled out in July 1932, the Dow Jones had lost 89 percent of its value.

A different Black Monday occurred in 1987. Before the crash, investors were extremely optimistic about the stock market. On October 19, 1987, the market finished a five-day decline by falling an additional 22.6 percent. While investors feared another Great Depression, the market recovered to its previous value in just two years.

The 2008 crash began when Lehman Brothers filed for bankruptcy. At the same time, Merrill Lynch collapsed because of its exposure to credit default swaps and subprime loans. Like dominoes, multiple banks in Europe failed as a global crisis ensued. Ultimately, the Great Recession of 2008 lasted for 18 months.

During the week of February 24, 2020, the Dow Jones dropped by about 12 percent. This was the largest financial crisis since 2008, and it was fueled by the spread of COVID-19. Then, an oil price war in March caused European indices to fall by almost 8 percent. On March 12, 2020, the Dow Jones dropped by 9.99 percent after President Donald Trump banned travelers from Europe. The Dow Jones declined by another 12.93 percent four days later when investors realized that a recession would be impossible to avoid.

What Should Investors Do Before or During a Stock Market Crash?

Evaluate any risky positions you currently hold. If you have stocks that have high volatility, you may want to consider selling. You should keep your stable investments so that you can benefit when the market bounces back later on.

Before a crash, you should increase your liquidity. Cash will allow you to navigate downturns. As long as you have enough cash, your stocks can lose value without it hurting you too much.

You should also be aware of your own risk tolerance. If you are nearing retirement age, you may want to purchase fixed-income annuities instead of investing in the stock market. Before a crash, you should diversify your portfolio. Once the next stock market crash occurs, you can buy stocks when they are cheap and watch your investment soar in value as the market recovers.

As always, the team here at Investment U is dedicated to delivering top notch investment opportunities right to your inbox. Sign up for our free e-letter today!