Throw Out the CAPE

Just as they were in February before the pandemic struck, stocks are expensive again.

Yet that may mean something quite different to investors now than it did back then. And for that reason it might be a good time for investors to disregard – temporarily, at least – a well-regarded stock market valuation measure.

More on that below.

But first, when you consider what investors have endured so far this year and the dismal outlook for corporate earnings and the economy over the next few quarters, it sounds pretty odd to call stocks expensive.

Despite the stock market’s 34% plunge between February 19 and March 23, the S&P 500’s cyclically adjusted price-to-earnings ratio (the well-known CAPE ratio) is back near 27.

(The CAPE ratio compares a company’s stock price with the company’s earnings of the previous 10 years. Other price-to-earnings (P/E) ratios compare stock price with expected future earnings. All of them are used to measure how overvalued or undervalued a stock is.)

A CAPE ratio of 27 is definitely expensive, considering that the S&P’s long-term average CAPE ratio is around 17.5.

The CAPE ratio did fall nearer that average – to around 20 – at the depths of last month’s market plunge. But of course the market has rebounded strongly since then – as of this morning, it was up about 30% from its March low.

Stock prices are generally supposed to reflect our expectations of the future.

When you purchase a stock, you are buying a portion of the company’s future income stream.

Yet the outlook for earnings is bleak, at best. Analysts expect second quarter earnings for companies in the S&P 500 to fall by almost a third year over year. Earnings for all of 2020 are expected to fall 18% below 2019 levels.

If Q1 earnings are any indication, those predictions may be optimistic. 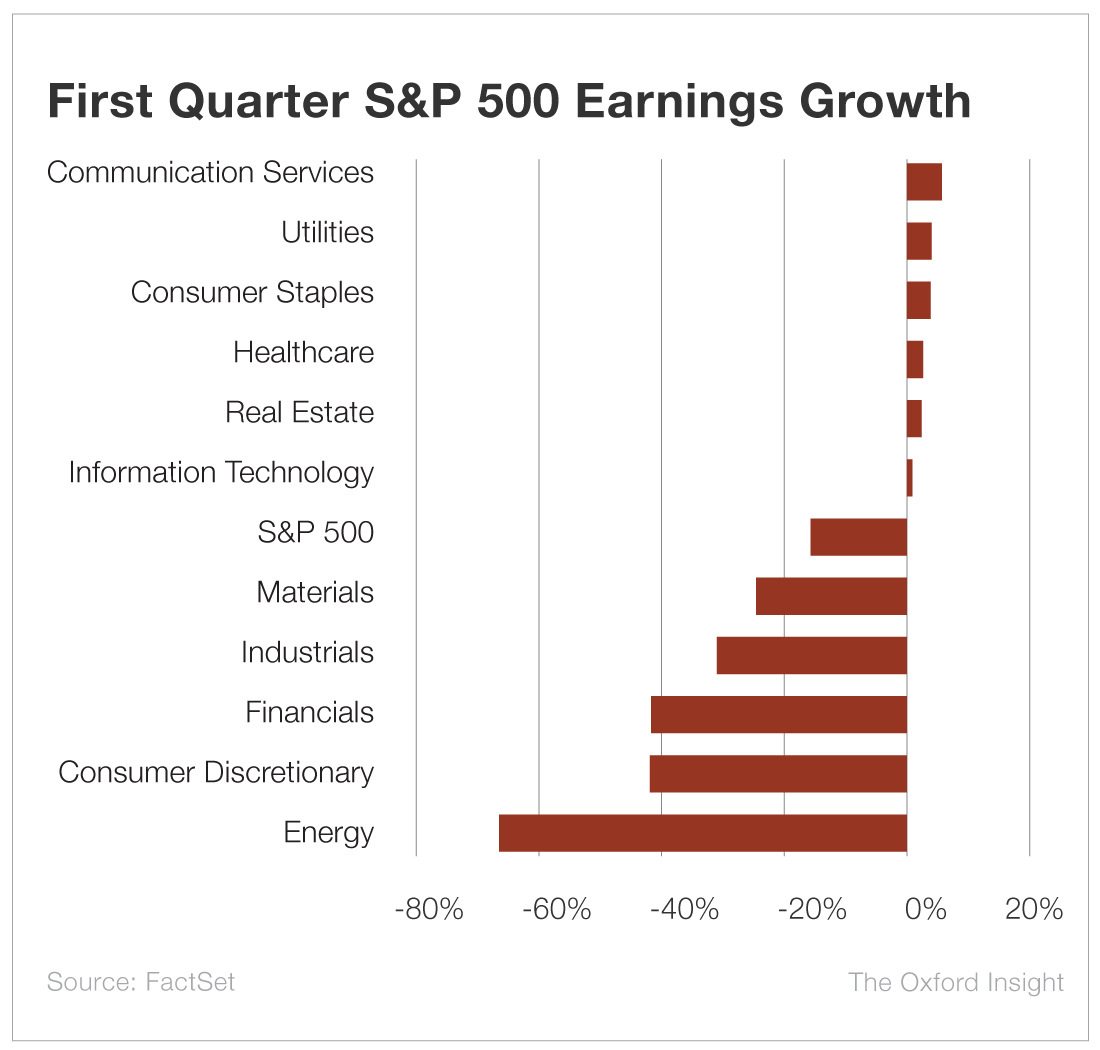 And the recession we’re now entering could be very deep indeed. The International Monetary Fund says the world economy is about to endure the worst downturn since the Great Depression. It sees the U.S. economy contracting 6% this year. (First quarter GDP fell by 4.8%, the Commerce Department reported today.)

So why on earth would investors bid up stock prices when what they’re paying for – profits – look to drop precipitously, along with economic growth?

Well, a couple of reasons. And they’re also why we investors might disregard the CAPE and other P/E ratios at the current moment.

As Contributing Analyst Jody Chudley pointed out in a recent piece, the S&P 500 is now more concentrated than ever in the very largest stocks. The six stocks above are so heavily weighted, they make up more than 20% of the index of 500 stocks.

It’s no wonder investors are flocking to these stocks. As the largest U.S. companies and household names, these megacaps are seen as safe bets in a volatile and uncertain market and – bonus – they also happen to offer many of the products and services in great demand in our quarantined society. That means digital connections, information and online retail.

Because these heavily weighted stocks are outperforming the market, they’re dragging the CAPE and other P/E ratios up with them. So the broader stock market – as measured by the CAPE ratio – may not be as expensive as it appears.

Second, when investors look at the price of a stock, they also take expectations of what the economy will do into account. According to recent research by Goldman Sachs, however, they look at the economy over a two-year horizon.

And while the U.S. economy will almost certainly shrink in 2020, most economists predict a strong rebound in 2021.

So, essentially, investors are looking past the bad news.

Finally, the very nature of the current crisis leaves most investors at an utter loss. We are all at the mercy of an invisible, unpredictable menace that may or may not keep us quarantined in our homes for additional weeks or months. And when we eventually emerge into daylight, we don’t know how we will interact with each other or conduct commerce.

Basically, there is not enough information to make an informed guess about what the world will look like six or 12 or 24 months from now.

That makes our investing decisions overly reliant on how optimistic or pessimistic we are. And optimism might be the better bet. As Chief Investment Expert Alexander Green recently wrote, the current market is telling us to be optimistic, and the market “has a long history of being more right than wrong.”

I have enormous respect for the CAPE ratio and the economist who made it famous, Nobel laureate Robert Shiller. The ratio has long been a reliable way to determine whether stocks are overvalued, undervalued or fairly valued. And it’s had some success in predicting market corrections too.

But this time, maybe, is different.