There are four main types of inflation: Creeping, galloping, hyperinflation and walking. Read on to learn more about these types and other related terms.

When goods and services increase in price, it is known as inflation. This is why you used to pay $2 for a gallon of milk, but the same gallon of milk costs $4 or $5 today. And depending on where you live, you could be paying even more! Some degree of inflation is positive and shows that the economy is healthy. If inflation increases too much, it can cause major issues. 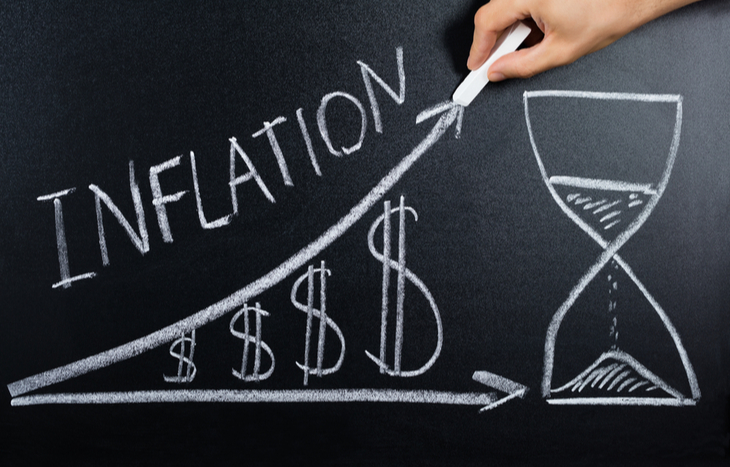 The Main Types of Inflation

Creeping inflation is a type of mild inflation. With this type of inflation, prices generally rise 3% a year or less. Because consumers expect prices to increase over time, they are more likely to buy products in the present.

By purchasing products and services today, consumers boost demand and drive economic expansion. Because of this, creeping inflation is actually good for the economy. Normally, the Federal Reserve wants inflation levels to be around 2% per year.

Galloping inflation is what happens when inflation is 10% or more. When we are at this level of inflation, money quickly loses value. Before long, employee wages and business income are unable to match the increase in prices.

Over time, foreign investors will leave countries because of inflationary pressures. This essentially removes the country’s capital sources, which causes additional instability in the local economy. Because of the political and economic hazards of galloping inflation, governments must work to avoid it.

Walking inflation is destructive, but it is not as bad as galloping inflation or hyperinflation. This kind of inflation happens when prices rise between 3% to 10% per year. When economic growth speeds up too fast, it can damage the economy.

During walking inflation, people buy extra goods to avoid paying more for them tomorrow. This causes demand to increase excessively. Therefore, suppliers cannot provide additional goods. And as a result, prices increase. Before long, goods and services can become too expensive for the average person.

Core inflation is a term for the inflation rate of everything other than food and energy. This is because gas prices naturally increase during the summertime. And high gas prices mean high food costs. Because of this, economists look at how prices increase for other goods and services.

Inflation does not always go up. When prices decline over time, it is called deflation. Normally, this happens when an asset bubble bursts.

Back in 2006, the economy of the United States developed deflation because of the housing bubble. Housing values declined, which meant people were unable to sell their homes. When deflation is particularly bad, it can cause depressions. The Great Depression of 1929 is one example of deflation causing a depression.

Stagflation happens when economic growth remains stagnant. While the economy is stagnant, there is some price inflation happening. Unemployment also remains high during stagflation.

Stagflation is a major issue for policymakers because the corrective actions you must take for high inflation can increase unemployment. Back in the 1970s, the Federal Reserve combated a period of stagflation by increasing the federal funds rate. This led to an economic downturn and high unemployment in 1981 and 1982. Fortunately, these measures also managed to end stagflation.

Wage inflation is a specific kind of inflation that only affects wages. During wage inflation, employees’ wages increase faster than the cost of living. This generally happens when there is a shortage of workers. It can also occur when labor unions negotiate for wage increases.

In general, economists say that there is a worker shortage if unemployment drops below 4%. Other than worker shortages, wage inflation can also increase if employees have the ability to choose their own wages. This is particularly common among chief executive officers.

The Types of Asset Inflation

Rising prices can occur among specific assets. Before the 2008 recession, the housing market increased in value before eventually crashing. Asset bubbles frequently occur with oil and gold. If an asset bubble is large enough, it can negatively impact the entire economy. In 2022… supply chain issues, surging demand, production costs, and relief funds have all played a role in inflation.

Food can be affected by inflationary pressures. Because of how important food is, these asset bubbles can lead to political unrest. For example, food inflation led to the 2008 food riots in India and the Arab Spring.

As most drivers know, gas prices can vary significantly throughout the year. During spring, gas prices normally go up in preparation for summertime vacations. Because oil is responsible for about two-thirds of the price of gas, rising oil prices can quickly impact the price you pay at the gas pump.

Oil prices can be affected by unrest in the Middle East or demand in the United States. At the beginning of the pandemic, oil prices famously fell into negative territory after demand declined precipitously. In 2008, crude oil prices hit a record high that contributed to high gas prices.

During economic downturns, investors turn to safe havens to protect their investment portfolios. Gold is a popular safe haven. In 2011, gold reached a high of $1,895 per ounce because of an asset bubble. Investors were worried about the declining value of the dollar, so they turned to gold as a hedge against hyperinflation.

How Do Governments Fight Types of Inflation?

If there is too much inflation, governments can use contractionary monetary policy to fight it. This kind of policy decreases the money supply by increasing interest rates. Once there is less money in the economy, people are less likely to spend money and more likely to save their paychecks.

There are two other ways to fight inflation, but they are less popular than changing interest rates. The government can also increase reserve requirements for banks. These requirements are basically the amount banks must have on hand in case customers need to withdraw money. When banks have higher reserve requirements, they have less money to lend to consumers. This naturally leads to less spending.

Andy Snyder from Manward Financial Digest routinely examines various types of inflation and their overall impact. To learn more, sign up for his free e-letter today.