What is the DAX Stock Index?

In the United States, the Dow Jones Industrial Average (DJIA) represents 30 of the largest publicly-traded companies. And while it’s a good benchmark for the broader economy, it only includes United States companies. As you might expect, there are similar indices in other countries, inclusive to the major public companies that call those countries home. For example, the DAX Stock Index (DAX).

The DAX, also called the DAX40 or the Deutscher Aktien Index, is a stock market index consisting of the 40 largest German companies that trade on the Frankfurt Stock Exchange. If you’re a U.S. investor looking to gain exposure to foreign investments in a safe way, the DAX offers exposure to international companies within an index that behaves similarly to the DOW and other stable domestic indices.

Here’s a closer look at the DAX Stock Index: its history, composition and why it’s a safe bet for investors seeking international exposure to blue chip companies abroad. 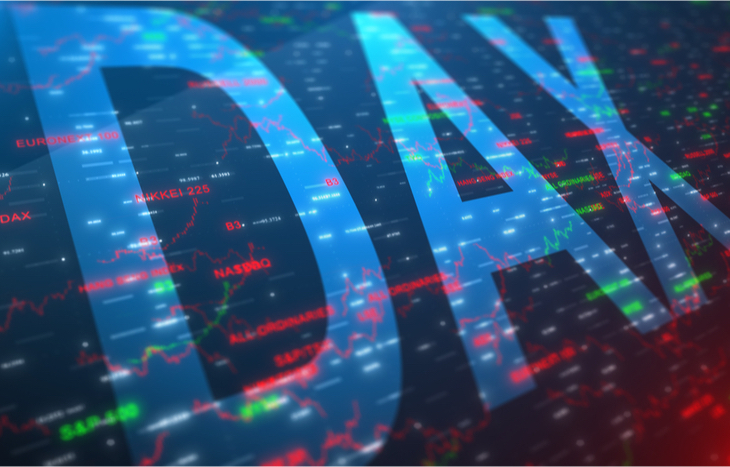 The History of the DAX Stock Index

The DAX was founded in 1988 as a way to benchmark the performance of the German stock market. It originally included 30 of the largest German companies and quickly became a barometer not only for Germany’s economic health, but for European markets as a whole. As of September 3, 2021, the index expanded from 30 to 40 constituents. Companies italicized in the list below were added as part of the expansion.

There are actually two versions of the DAX40: a performance index and price index. The performance index measures total return; the price index doesn’t account for dividends. Its price is calculated in real time by an electronic trading system called Xetra. The index is modeled using a free-float methodology that calculates index weightings alongside a measure of average trading volume. Different from most other major indices, Xetra updates the DAX with futures prices even after the markets close.

Like the DJIA, blue chip bellwether companies dominate the DAX index. While its constituents can change from year to year, its composition remains relatively consistent. Notable departures from the index in recent years include Deutsche Lufthansa (2020), Beiersdorf AG (2021) and Wirecard (2020), a now-insolvent fintech company. Here’s a look at the 40 companies that currently comprise the index, as of 2022:

Together, these 40 corporations represent about 80% of the aggregate market cap of the Frankfurt Stock Exchange, making it a prominent benchmark for the German stock market and European markets as a whole.

One of the hallmarks of the DAX Stock Index is its diversity. Unlike other large indices that tend to skew toward certain sectors, the DAX offers a strong, balanced allocation. As of 2022, the current breakdown of the index by sector is as follows:

The only sector absent in the DAX is the Energy sector; however, some argue that Siemens Energy AG (ENR:GR) falls into this sector as opposed to the Industrials sector. Nevertheless, the DAX40 is a great example of a well-balanced index.

How to Invest in the DAX Stock Index

Like any other stock index, you can’t invest directly in the DAX; only funds designed to track its performance. The best way to do this is through passive ETFs. Some of the most popular DAX ETFs include:

Of course, investors can always mimic the index by investing in each company that comprises it. While this allows you to pick and choose which companies or sectors you add to your portfolio, you lose the peace of mind that comes with a broad-market investment. Often, it’s best to own shares in an ETF that’s pegged to index performance.

Should You Invest in the DAX Stock Index?

Investors who want international exposure without the risk of investing directly in foreign companies will gravitate to the DAX Stock Index. Not only does it offer the protection of a broad-market index, it’s composed of well-established companies that power the German economy. It’s best to think of the DAX40 as a German equivalent to the DJIA.

While it functions differently than other indices in terms of its free-float methodology and future price updates, it’s nonetheless a safe investment for investors who want international exposure without the risk of diving into growth stocks or startups in smaller economies.