The article below comes from Jody Chudley, one of our newest contributors. In today’s column, he sheds light on airline stocks and prices…

Take April 7, for example, when the Transportation Security Administration notched a new record-low 97,031 passenger screenings. On the same day last year, that number was 2.09 million.

That is a year-on-year decrease of more than 95% in the number of passengers getting on planes. Business isn’t bad… Business is gone! 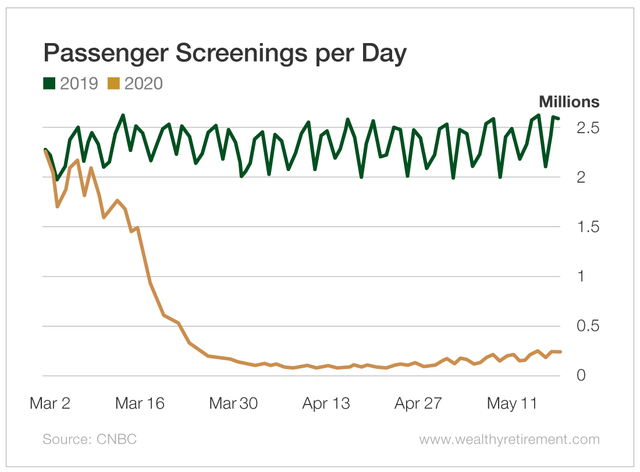 Daily passenger traffic has inched up a little bit in May, but it has hardly started the journey to a full recovery.

It goes without saying that this drop in air travelers has been a brutal shock to the revenues of the airline operators – and this has not been lost on the market.

Airline Stocks Drop With the Industry

The stock prices of the major airlines reflect the difficulty that the industry is facing. 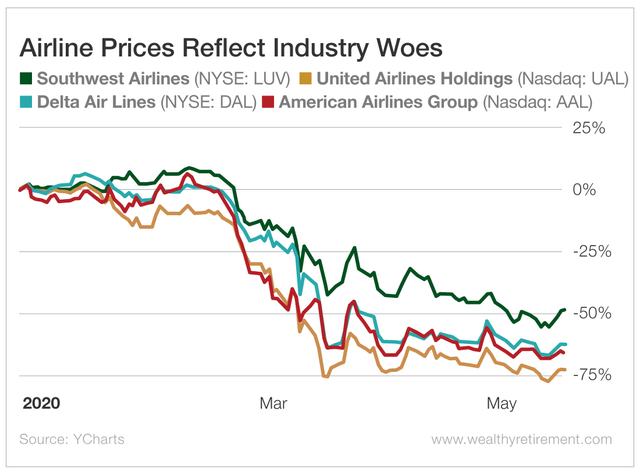 But many investors have been asking… Do these huge share price declines represent a big bargain opportunity? Is now the time to place a bet on the airline industry’s recovery?

Bill Miller: Betting on a Rebound

If you aren’t familiar with Bill Miller, here is what you should know: He is the only fund manager in history to have outperformed the S&P 500 for at least 15 years in a row.

Miller achieved that feat, then known as “the streak,” from 1991 through 2006 while running money for Legg Mason. It was an incredible accomplishment.

At a recent investor roundtable organized by Ariel Investments, Miller pounded the table on why shares of airline operators are major bargains today.

I checked the holdings of his fund, Miller Opportunity Trust, and can verify that he has 10% of his portfolio invested in the sector as of April 30.

So he is putting his money where his mouth is…

While speaking at the Ariel Investments roundtable, Miller explained his interest in owning the airlines as follows…

People love flying and don’t worry about catching polio or smallpox since there is a vaccine. If you don’t own the airlines, then you’re making a bet against the vaccine…

If there is a vaccine that will eliminate all the issues people have about flying… these (stocks) will come back very, very quickly. Plus, all the bad news is already priced into these stocks.

That is a very bullish case.

Warren Buffett: Throwing in the Towel

On May 2, Buffett held his annual Berkshire Hathaway (NYSE: BRK-B) shareholder meeting. There weren’t tens of thousands of patrons packed into an arena for the Berkshire meeting this time. Instead, it was held online.

It was in this meeting that Buffett revealed that in April, he had completely sold all of Berkshire’s airline stock holdings. These were investments that he had held for several years.

To be clear, he sold the airlines after the share prices of these companies had collapsed.

It’s estimated that he took around $3 billion in losses on those positions.

Clearly, he soured quickly on these businesses.

In the meeting, he attributed that big change of heart to what he believes will be lasting implications from the pandemic.

Buffett explained, “I don’t know that three, four years from now people will fly as many passenger miles as they did last year… That means that you’ve now got too many planes.”

Clearly Buffett isn’t as bullish about a vaccine being an immediate cure to airlines’ problems.

Who Is Right – Buffett or Miller?

I don’t believe that airline stocks are a clear bargain today. While share prices are down, earnings are down even more.

Thinking about the airlines on a per share basis is important because the share counts of these companies have increased in recent weeks.

Take United Airlines (Nasdaq: UAL), for example. The company just raised $1 billion of cash by issuing more than 40 million shares at $26.50 per share.

Considering United Airlines traded for almost $100 per share not that long ago, issuing 40 million shares at these prices and increasing the total share count by 20% is hugely dilutive to shareholders.

Now, even if earnings for United went back up to 2019 levels tomorrow, on a per share basis they will have decreased because of the higher share count.

The other airlines have been doing the same thing – issuing equity at rock-bottom share prices. They have also been taking on more debt to help support operations, which puts them in even weaker financial positions.

Further, even the assistance from the federal government under the CARES (Coronavirus Aid, Relief and Economic Security) Act includes warrants that will further dilute shareholders.

I believe there are better places to put your money today than in airlines, and I intend to show you where. Stay tuned…