When you first start investing and begin paying attention to the financial media, you’re bound to hear about the strength or weakness of the U.S. dollar.

But that information is essentially meaningless to many new investors, as most financial media outlets provide little explanation or context. I’ve run across quite a few first-time investors who don’t understand what it means if the dollar is strong or weak or – perhaps more important – how that can impact their portfolios.

And you can hardly blame them because in everyday transactions, you don’t notice the dollar’s movement. The things you buy at, say, Walmart, cost about the same today as they did two months ago, despite the fact that the dollar has strengthened significantly over that time.

Yet the value of every currency constantly rises and falls relative to other currencies.

There are many reasons, and they can get quite complicated. But the best explanation is a simple one: supply and demand.

To purchase the products or services produced by a country, or to buy stocks of its companies, you need to hold that nation’s currency. So for trade to occur between countries, people need to exchange – or buy and sell – different currencies on global markets.

And when demand for a nation’s products, services or companies increases, demand for its currency will too. That increased demand drives a currency’s value higher and makes it “stronger.”

That’s what’s happening right now with the dollar, which is up nearly 3% so far this year against a basket of other major currencies. 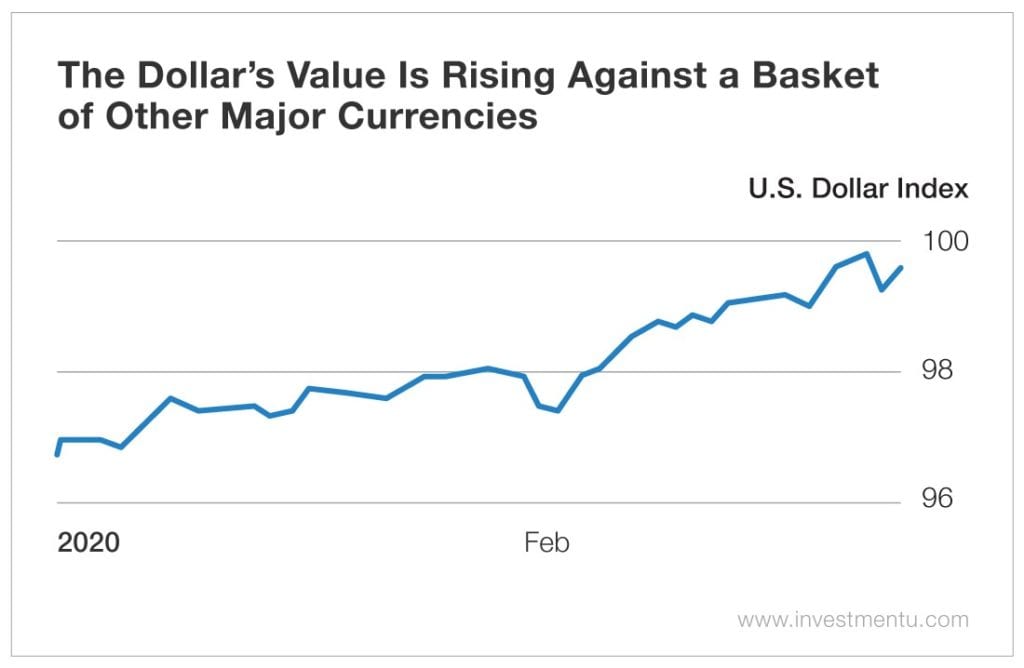 Although the U.S. market took a hit yesterday, the U.S. economy is in a healthier position overall than most other major economies. And with growing concerns around the world about the coronavirus epidemic, many non-U.S. residents are making sure they have access to dollars in case things go awry. They’re essentially securing their ability to get things they need in case of an emergency.

Few nations – you could make an argument for none – can rival the U.S. for the variety and quantity of goods and services it produces. These range from agricultural and manufactured products like wheat, beef, cars and planes to services like world-class healthcare and education.

(Gold is also a safe haven in times of worry. And investors have been flocking to the yellow metal in recent months, sending its price to record highs.)

Interestingly, there is a correlation between a strong dollar and the performance of the stock market. When the dollar is falling in value, U.S. stocks underperform those of other advanced economies. And when the greenback’s value is rising relative to other currencies, which has been the case since 2011, U.S. stocks perform significantly better than foreign stocks. 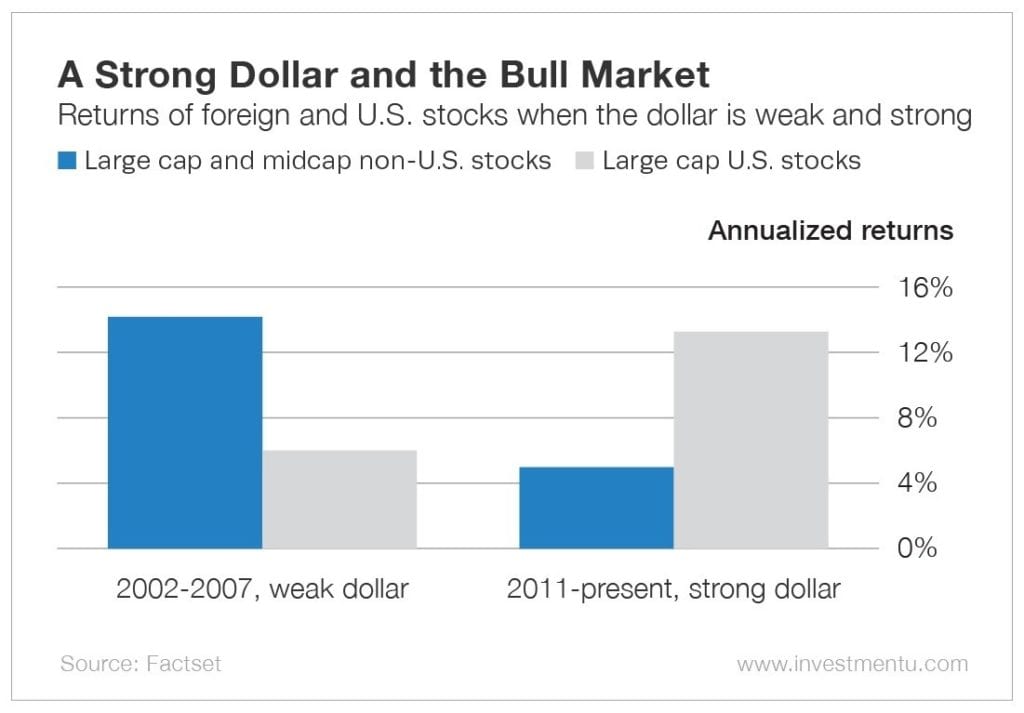 It’s not possible, however, to say that the strong dollar causes the bull market or vice versa. This is merely a correlation. It’s possible both phenomena are caused by other factors – a strong U.S. economy is a good candidate.

But the link between a strong dollar and the bull market is right there in the data.

At the moment, at least, the dollar looks to continue to strengthen, especially given new fears about a pandemic. That would suggest that, as investors, we should focus on U.S. stocks as a significant part of our portfolios right now, along with gold.

But as always, a healthy portfolio should be diversified. It should contain a mix of domestic stocks, foreign stocks, large cap and small cap stocks, bonds, precious metals, and other asset classes.