Yet this event went largely unnoticed by investors and market analysts. You didn’t hear much about it in the media either (most of that group is determined to peddle only doom and gloom).

What happened? Well, the Nasdaq Composite Index went positive for the year.

It’s not a lot, but it’s pretty impressive in a year when the economy fell apart and the stock market cratered.

And it compares very favorably with the other major market indexes. The S&P 500 Index is down about 10% year to date, and the Dow Jones Industrial Average is down more than 15%. 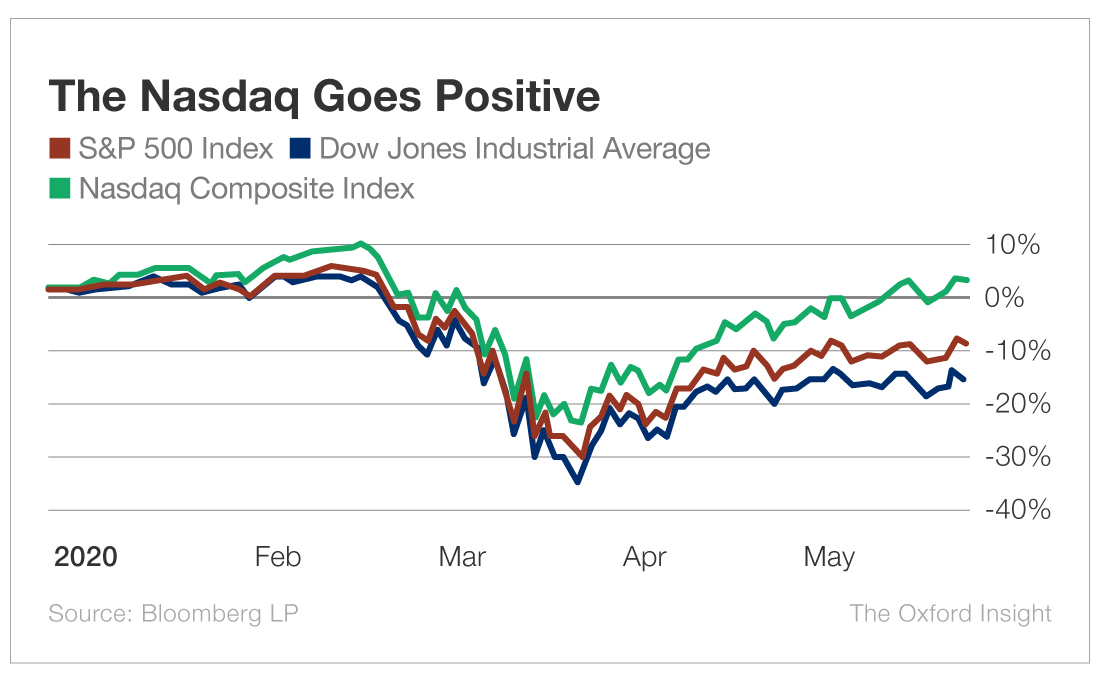 Right. But looking at what they track tells a story and may predict the future.

The S&P 500 tracks the 500 largest U.S. stocks, or about 70% of all publicly traded stocks. So it’s the best and broadest gauge of the overall market and economy, basically.

There are a few tech firms in the Dow, but they make up less than 20% of the index. Healthcare, consumer staples and industrials are heavily represented.

The Dow is also the oldest market gauge; it was invented by Charles Dow in 1896.

The Nasdaq Composite Index, by contrast, is relatively new. It was launched in 1971.

Unlike the other two major indexes, the Nasdaq skews heavily toward a single industry: tech. Technology and telecommunications stocks make up more than half of it. The next biggest industry is consumer services, at about 20%. Industrials and energy together account for less than 7%. 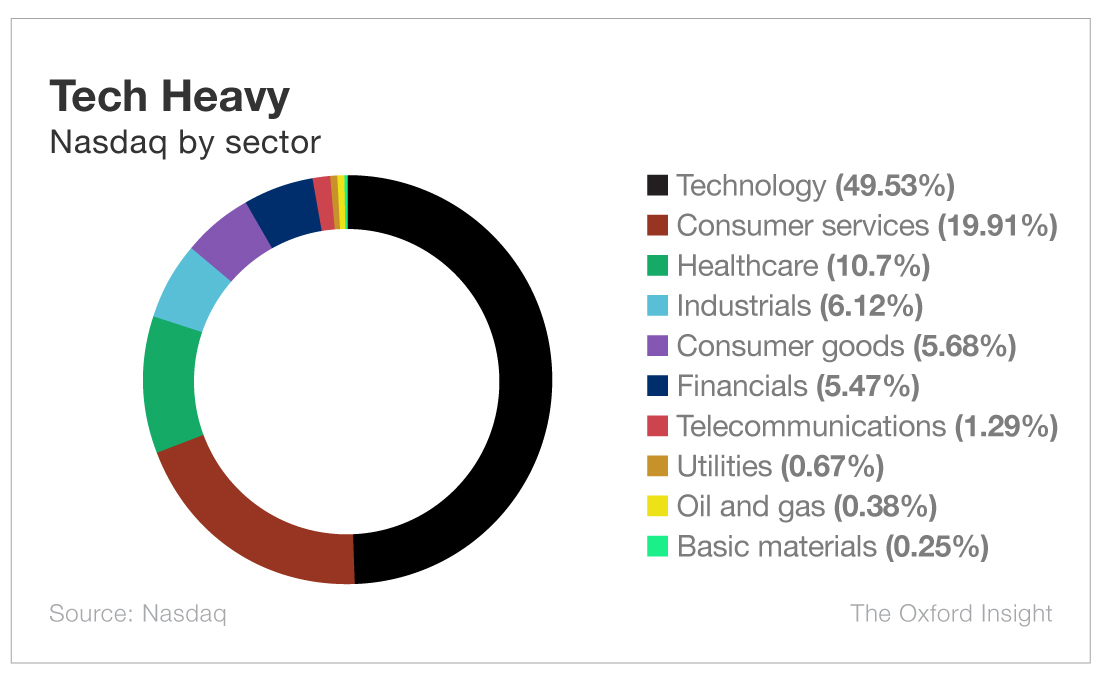 The Nasdaq has become popular in recent years because it is so heavily weighted toward tech sector and innovative companies. And those companies, from Microsoft (Nasdaq: MSFT) to Apple (Nasdaq: AAPL) to Amazon (Nasdaq: AMZN), as well as many smaller tech firms, have become much more prominent over the last few decades.

And there’s the hint about the future.

“The post-pandemic world will be much different from the world before it,” Chief Trends Strategist Matthew Carr wrote last week. (By the way, the Nasdaq’s outperformance didn’t go unnoticed by Matthew.)

I couldn’t agree with Matthew more. As I wrote in April, this pandemic will leave permanent changes in its wake. It will alter how we think about the world, how we work and play, and how we interact and conduct commerce.

It will also destroy many businesses and create others.

There will be many more such failures as the pandemic and economic downturn play out.

But if there’s a silver lining to economic contractions, it’s this: They accelerate the ongoing process of pushing aside outdated and inefficient business models and conjuring innovative and more productive ones to take their place.

Austrian political economist Joseph Schumpeter wrote about this almost 80 years ago. In his 1942 book Capitalism, Socialism and Democracy, Schumpeter had much to say about the never-ending process of “creative destruction.”

Schumpeter saw these periods of turmoil – economic contractions in particular – as fertile ground for entrepreneurs and innovators to bring new industries into the world or radically overhaul and improve existing ones.

Now, not for a moment am I attempting to minimize or dismiss the real pain this recession is causing so many innocent individuals. These workers and business owners are victims of this pandemic that forced the economic shutdown and closed restaurants, malls, shops and businesses everywhere.

Instead, my point is merely one of optimism in trying times: Untold numbers of new business models will arise from the ruins of this global catastrophe. And they will provide new and potentially better opportunities for workers, entrepreneurs and investors.

And that brings us back to the Nasdaq. Markets convey the collective wisdom of all the investors involved in them, and this wisdom is about what the future holds for us. Individual investors may not know it, but they’re part of this signaling mechanism.

By diverting their capital away from other sectors and into technology companies, investors are saying they believe those are the businesses that will put that capital to best use going forward. The tech sector is where innovation and dynamism will be the greatest, the Nasdaq’s outperformance is telling us.

We should be listening closely.