Lately, I’ve been getting suggestions from Trade of the Day subscribers who are asking for more small cap stock picks.

Sure, seeing all of the options winners we’ve had in The War Room is great, but there’s also room for stock plays here in Trade of the Day.

On Tuesday, I explained why Flutter Entertainment will be a small cap winner in the $150 billion sports betting sector.

But today, I’m going to offer you another play to keep on your radar (or perhaps you can even accumulate some shares at current levels).

It’s a defense company that makes liquid fuel, solid fuel, air-breathing and electric propulsion engines, which are basically all of the things that make rockets and missiles go up.

This company is one of Mario Gabelli’s top picks from the recent roundtable discussion he did with Barron’s. I have to admit, out of every pick made from the entire roundtable, this was the one name that really caught my attention – because of its uniqueness, its market position and the demand for the product it’s offering.

You see, since no existing defenses can stop hypersonic missiles, every country wants them, including the U.S., Russia and China. And the Pentagon’s defense budget just increased from $716 billion up to $738 billion.

On a two-year chart, the stock is still within an established upside trend that’s now about to break to new 52-week highs. 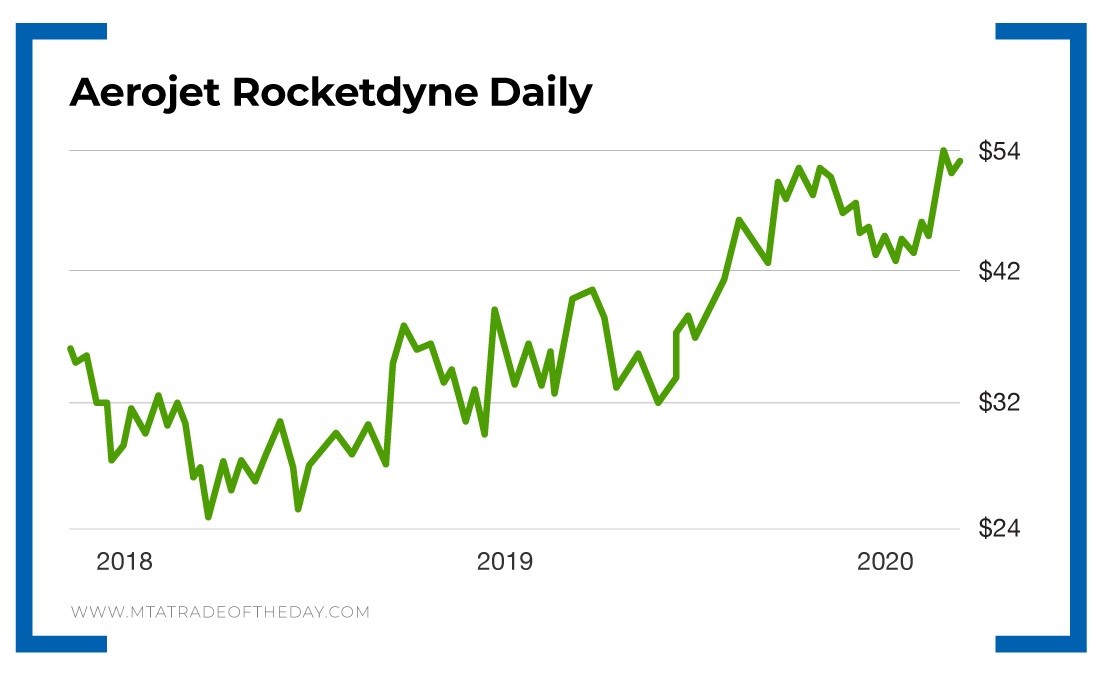 Throw in additional demand from projects like Space Force, Blue Origin and SpaceX, and it certainly looks like Aerojet Rocketdyne has a lock on a market with plenty of deep-pocketed customers.

Action Plan: I don’t think that demand for liquid fuel will be going down anytime soon. If anything, demand will only increase – especially if we get any sort of geopolitical flare-up going forward.

No matter the defense buyer, Aerojet Rocketdyne will be the company to buy from. With a solid stock chart, this is a name worth adding to your portfolio at current levels.

If you want to start trading picks like this, join me in The War Room!