The Best Airline Stocks to Buy in 2022

The airline industry has always been known for being notoriously tough. Its profit margins are razor-thin and can be as low as 1%. This means that if you buy a $300 ticket, the airline is probably only making about $3 in profit. The rest of that money goes to paying for fuel, salaries, ownership costs, government/taxes, maintenance and other costs.

However, flying is also a necessary expense for most people. If you need to travel across the country, flying is about the only option. This makes airlines almost essential in today’s society and could mean that airline stocks might be useful in your portfolio.

Let’s take a quick look at some of the best airline stocks that you can buy. 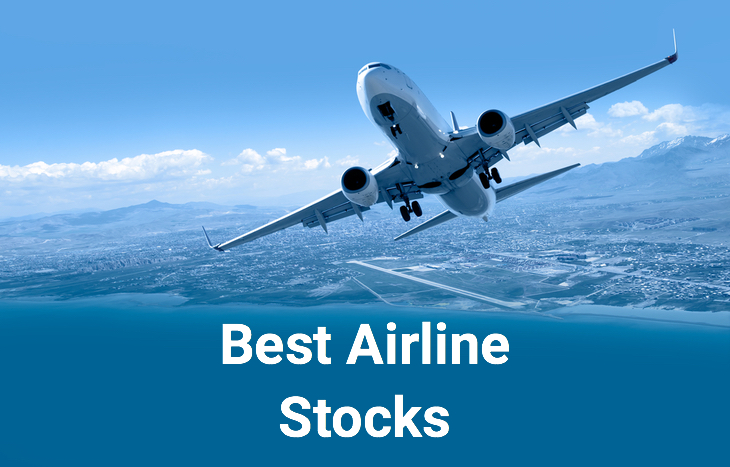 If most industries got “hit hard” by the COVID-19 pandemic then the airline stocks and industry got absolutely clobbered. In total, U.S. passenger air traffic fell by about 65%. The International Air Transport Association deemed this as “the worst year in history for air travel demand.”

As you’d expect, airlines were bleeding money in 2020 and the nine major airlines reportedly lost $46 billion combined before taxes.

Things got so bad that Congress had to approve $40 billion in payroll assistance as well as $25 billion in low-interest loans. This was money that airlines desperately needed just to keep their lights on and engines running.

While this stemmed the bleeding a little bit, it didn’t stop roughly 400,000 people being fired, furloughed or told they might lose their jobs.

Even though the worst of the pandemic seems to be behind us, there are still updates almost every day regarding new variants of COVID-19. However, any new updates related to COVID-19 are likely to impact all airlines about the same.

For this reason, we’re going to look only at the underlying business behind these airline stocks instead of how they’re reacting to COVID-19.

Almost all airlines are pretty universally disliked. Yet, Southwest (NYSE: LUV) is one of the only airlines that people tolerate. According to reviews on Airline Quality, Southwest had the highest average review of all major American airliners with an average of 5/10 stars. This was followed by:

Other policies like allowing customers two checked bags for free have helped this airline build one of the strongest brands in the industry. As one of the best airline stocks, Southwest has climbed well above pandemic lows.

There’s a large group of people who want the finest things in life. This group has no problem spending an extra few bucks to upgrade to first-class or even fly private. However, there’s an even larger group of people who want to spend as little as they can while flying. Spirit Airlines (NYSE: SAVE) goes after the second group. It snags up the customers who will book a flight with three layovers just because it’s $30 cheaper.

If Southwest is America’s highest-reviewed airline then Spirit is usually America’s cheapest.

This cost-efficient approach helped this airline stock grow revenues consistently for the years 2016-2019 from $2.3 billion to $3.8 billion. It’s also already rebounded slightly so far into 2021 and posted revenue of $859 million for Q2.

As the need for air travel returns to normal levels, there will always be people who just want the cheapest flight. No matter how much people may dislike the airline, they’ll still book a ticket because Spirit is saving them money.

Since many airlines are fairly similar, you may want to consider buying the U.S. Global Jets ETF. This will give your portfolio exposure to many different airline stocks without having to pick one airline.

By buying into the U.S. Global Jets ETF, you will own a small slice in all these companies:

The fund has about 50 holdings in total and you can read through the entire list of holdings here. As expected, this ETF’s price is down from pre-pandemic highs. But as the recovery continues, it could reward investors going forward.

When it comes to major airline stocks in the United States, most people know the main players. You have American, Delta, United, Southwest, Spirit, Frontier and Jetblue. Then, to a lesser extent, you have Alaska, Allegiant and Hawaiian. Due to high barriers of entry, it’s rare for new players to enter the game.

However, there’s one new company that just merged with a SPAC. That company is Wheels Up (NYSE: UP) and it’s a unique airline stock.

Wheels Up is a company that connects flyers to private jets for short or medium flights. Almost like calling an Uber, Wheels Up allows you to book a plane ride across the country. In total, it has 1,500 private planes in their fleet and focus on “time well spent, not just time saved.”

2021 was a year where many millions of people struggled and got on unemployment. However, it was also a year where wealthy Americans added billions to their net worth. Moving forward, these Americans will have more money than ever to spend on luxuries like chartering a private jet whenever they feel.

On top of that, flying commercially is now seen as a public health risk by some people due to the threat of contracting COVID-19. Looking at both these factors, the future looks bright for private aviation.