Frontier Airlines IPO: Airline to Bring FRNT Stock Back to Market in 2021

The Frontier Airlines IPO is making headlines as the second airline to file in 2021. The travel industry was crushed in 2020, but companies are hoping to ride the rebound wave in 2021. But is Frontier stock a good investment opportunity? 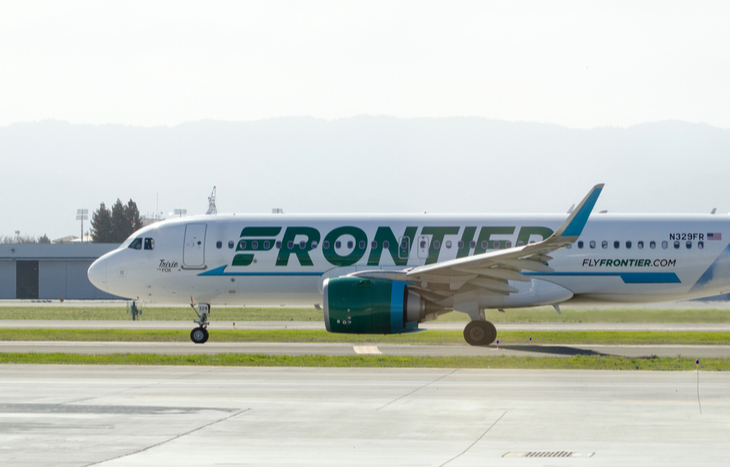 Frontier Airlines is an American low-lost carrier. Its slogan is “Low Fares Done Right.” The airline targets domestic and leisure travel over business and international travel. As of December 31, 2020, Frontier had a fleet of 104 aircraft, with a commitment to purchase 156 more by the end of 2028. The airline serviced 23 million and 11 million passengers in 2019 and 2020, respectively.

The company filed for a Frontier Airlines IPO back in 2017. At the time, it was set to be the first airline IPO since Virgin America in 2014. However, it withdrew the filing in July 2020 when the COVID-19 pandemic halted travel. Now, the airline is moving forward again to offer Frontier Airlines stock.

The Frontier IPO is in a delicate market. The 2020 pandemic hit the travel industry hard. But investors have already seen signs of improvement. In December 2020, Airbnb went public and shares more than doubled in its first day.

Additionally, Frontier is the second airline to file in 2021. Sun Country Airlines filed for an IPO in January. Both claim to be ultra-low-cost carriers (ULCCs). And it could be a sign of optimism for the travel industry.

So, let’s look at where Frontier is positioned in this market.

Frontier claims to be a ULCC, meaning it has some of the lowest prices in the industry. The airline’s unit cost was 10.3 cents for the year ended December 31, 2020. It compares this number to the unit costs for the ‘Big Four” airlines (American, Delta, Southwest and United) and middle three carriers (Alaska, Hawaiian and JetBlue). The unit costs for these groups are 16.52 cents and 16.25 cents on average, respectively. As for two other UCLLs, Spirit and Allegiant, unit costs were 10 cents for each.

Frontier’s low cost is further supported by its “unbundled fares.” Although passengers can find it frustrating that they have to pay extra for carry-ons and luggage, the airline says the lack of onboard items helps to lower its costs.

In addition to lower costs, Frontier is positioned to benefit from the return of travel post-pandemic. Analysts estimate the first travel category to make a bounce back will be leisure. This is Frontier’s target audience, which is a good sign for Frontier stock.

According to the Airlines Reporting Corporation, for the week ended February 21, 2021, the number of tickets purchased as a percentage of the same time period in 2019 was 54% for online travel agencies with a primary focus on leisure travel, 32% for traditional leisure/other agencies with a primary focus on leisure travel, and 15% for corporate agencies whose primary business model is managed corporate or government travel. We design our route network to capture low fare demand among leisure travelers and our three largest bases are Denver, Orlando and Las Vegas, which draw a significant proportion of leisure travelers. In the seven months ending February 29, 2020, according to a post-travel survey we conducted, 89% of our customers were leisure travelers.

But not everything is looking great for the Frontier IPO…

The biggest risk factor is the COVID-19 pandemic. It’s true that people are returning to travel as more of the population becomes vaccinated and as spring fever drives people out of their homes. However, there is no guarantee, the company says, that the virus will be contained. Additionally, some demographics, such as the elderly population, will likely continue to be cautious about travelling and social interaction.

Although Frontier has some of the lowest prices and costs in the industry, there’s a lot of competition. And not just in pricing. In its IPO filing, Frontier states…

The extremely competitive nature of the airline industry could prevent us from attaining the level of passenger traffic or maintaining the level of fares or revenues related to non-fare services required to achieve and sustain profitable operations in new and existing markets and could impede our growth strategy, which could harm our operating results. Due to our relatively small size, we are susceptible to a fare war or other competitive activities in one or more of the markets we serve, which could have a material adverse effect on our business, results of operations and financial condition.

Furthermore, Frontier informs investors about restrictions on gates at some of the most popular airports, such as JFK, LaGuardia and Reagan National. These places require government-controlled takeoff or landing slots. Frontier lists this as a risk to its future growth plan.

Understanding a company’s financial data is key when investing. Frontier stock is no different. However, investors should understand the company’s 2020 information is heavily impacted by restrictions and outcomes stemming from the COVID-19 pandemic.

As for the use of proceeds, the company states in the IPO filing…

We intend to use the net proceeds to be received by us from this offering for general corporate purposes, including cash reserves, working capital, capital expenditures, including flight equipment acquisitions, sales and marketing activities and general and administrative matters and for possible debt repayment.

So for those interested: What is the Frontier Airlines IPO date?

Frontier confidentially filed under the name Frontier Group Holdings on January 25, 2021. Citi is the leading underwriter alongside Barclays and Deutsche Bank. Information on the Frontier IPO is limited due to the filing not being made public until March 8. Currently, Frontier has a $100 million placeholder. The date, price range and offer shares are unknown.

Frontier Airlines stock will trade on the Nasdaq under the ticker symbol FRNT.

If you’re looking for the latest investment opportunities, consider signing up for Liberty Through Wealth below. It’s a free e-letter that’s packed with investing tips and tricks. Whether you’re a beginner or an expert, there’s something for everyone.

Many investors are skeptical about Frontier Airlines stock. In March, the IPO market has been negative, so Frontier might wait to time the market. Sun Country is scheduled for March 16 and could be a good indicator of how the market feels about airline stocks. Make sure to check back for more updates on the Frontier Airlines IPO. Also, here’s an updated IPO calendar for other opportunities.